In which it is okay for me to exist here

I shared a FaceBook post last week that made me feel powerfully vulnerable and ashamed.  Bloggers call this a “vulnerability hangover,” which seems pretty all true.  I shared it after tossing and turning one night, after hearing some harsh words spoken about me, I wanted to rise up and defend myself.

On a subterranean level, I wanted to articulate that it was okay with me to be heard, to be powerful, to stand up for myself.  I wanted to acknowledge the depth of my struggles -as I’ve tried to again & again- while also acknowledging that my marriage as a living, breathing organism deeply wounded me as well.  That’s not something I’ve been able to articulate in very many settings, if it all.  I’ve mentioned over the years an abiding depth of sadness but Lord knows I wasn’t able to articulate the plethora of issues we faced beyond my counselor and 2 trusted friends who “got” it.

Later, the fall out.  A few Faceboook friends lost (though I did invite this) & an acknowledgement of shame by the one whom the post referred to.  He’s still a good man, a great father, a fruitful minister, etc.  I’m still a good woman, a loving mother.  Why should that be said?  Humans are profoundly complicated.  Everyone over 22 knows this right? I didn’t articulate all of the loving and wonderful things he did over the years because that’s not what it was about.  I didn’t articulate the ways we fought hard for the good of the other, because that’s not what it was about.

What it was about was this: I am here.  I exist on this planet. I have a voice on this planet. I am redeemed on this planet.  I deserve the air that I breathe here on the shiny blue marble.  This is my perspective.  I am angry. I am sad. I am frustrated. I am regretful. I have hope. It is A-OKAY for me to share my perspective on what happened to ME.  You were not there, thankyouverymuch.  This is my life and I am not the Jezebel to his Hosea.  I mentioned that little zinger in particular because that statement was made publicly.  A statement that was made publicly –by a family member no less- deserves to be addressed publicly.  I wanted to courageously address that misstatement and the sentiment behind it.

Fall out.  Simultaneously, lots of rah-rah-shish-boom-bah, i.e. “good for you,” “preach it,” and the like rolled in. Vulnerability hangover ensued: two, three days of panic, fear, anxiety.  Is it really worth it to open my big ass mouth, potentially alienating our many mutual friends?  I read my angry words and I know it’s difficult to process for anyone who’s close to either of us.  I am weak.  Someone intimates  I’ve done something wrong and I fold over like a wilted flower begging for the sun.  Dear God revive me!

Nicole Cottrell, a woman I love & respect dearly ‘got it.’ Not just the post, but the entire crux of my very-public-writing-life. 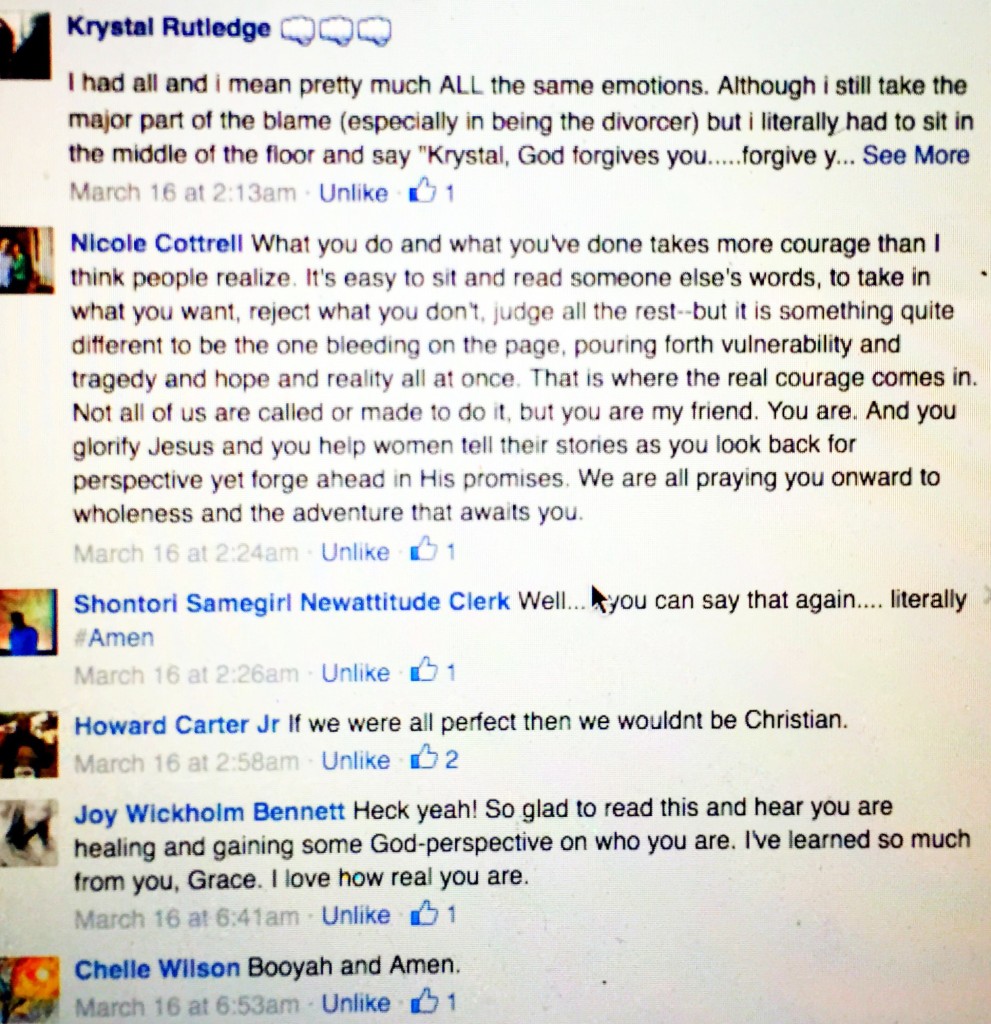 Nicole is right. I was -and am- in fact, bleeding out on the page.  BLEEDING. I have been writing vulnerably about my life both in blogging and 3 books for years now.  Have you ever asked yourself why anyone would need to keep saying publicly, “I am here.  I exist on this planet. I have a voice on this planet. I am redeemed on this planet.  I deserve the air that I breathe here on the shiny blue marble.  This is my perspective.  I am angry. I am sad. I am frustrated. I am regretful. I have hope”?

Hard truths are said, almost rehearsed, gritty and messy, written and cried over so that the writer can learn to believe it.

There are those of us in the world who for WHATEVER the reason, big and small, genuinely fight for a place to belong it.  For me, it’s never felt like a battle to belong in it, I’ve mostly been able to figure out how to exist within the normal constraints –look pretty, talk white, get an education at all costs, try to be successful, smile, shuck & jive.  If you throw the extra layer of expectations from the Christian community, well, I mostly figured that out too —look pretty, but not too pretty, talk white, be appropriately charismatic, keep quiet about LGBTQ issues & keep most sins hidden from the general public, especially ANYTHING having to do with sexuality. I’ve conformed, I’ve conformed, I’ve conformed.

The way my childhood worked against me was that upon entering adulthood I was far too scared to exit away from the norms for fear the truth would be revealed: little Gracie Green didn’t belong on this planet.  Kick her the fuck out.

Last Fall, I went to a retreat to deal with my issues.  One day, I’d like to write about this, but for now, I’m fearful to go there.  I digress.  At the retreat, we dealt with the messages we heard and still live by.  Mine were fairly sobering.  Sadly, it was the first time in 38 years I was able to put my finger on the “why” behind many of the behaviors that hurt myself. Most notably, my extreme difficulty in believing this seemingly basic idea: I matter.

When I don’t matter, I can’t possibly defend myself without an extraordinary amount of doubt and superfluous apologies.  I *want* to say I’m sorry I made someone or three feel bad while I was angrily & imperfectly trying to defend myself but I shouldn’t. I gave my one single apology to the one whom the post referred to, and that’s all the apologizing I am going to do.  Anything past that, is when I start apologizing for existing at all. I’ve been living like that for many, many years. I can’t live like that anymore.

I desperately want to reach out to others who feel a deep and abiding shame in their very existence.  As much as I continue to dig deep, to grasp my ‘okay-ness’ in this world, I pray the act of doing so gives birth to hope. Then? Then it’s worth it.

Today, while writing this post, I got this message from my friend, Chante which brought me to tears & confirmed that I should share it…

I want to thank you for being so vulnerable and allowing peeps to see the good, bad, ugly, and fabulously great parts of your life. It’s not often we get to see people really struggle with forgiveness and grace with God and others, and it is so necessary.

There’s really no other good reason to write if it isn’t somehow healing myself & others.  It’s going to be messy, y’all. It has to be. 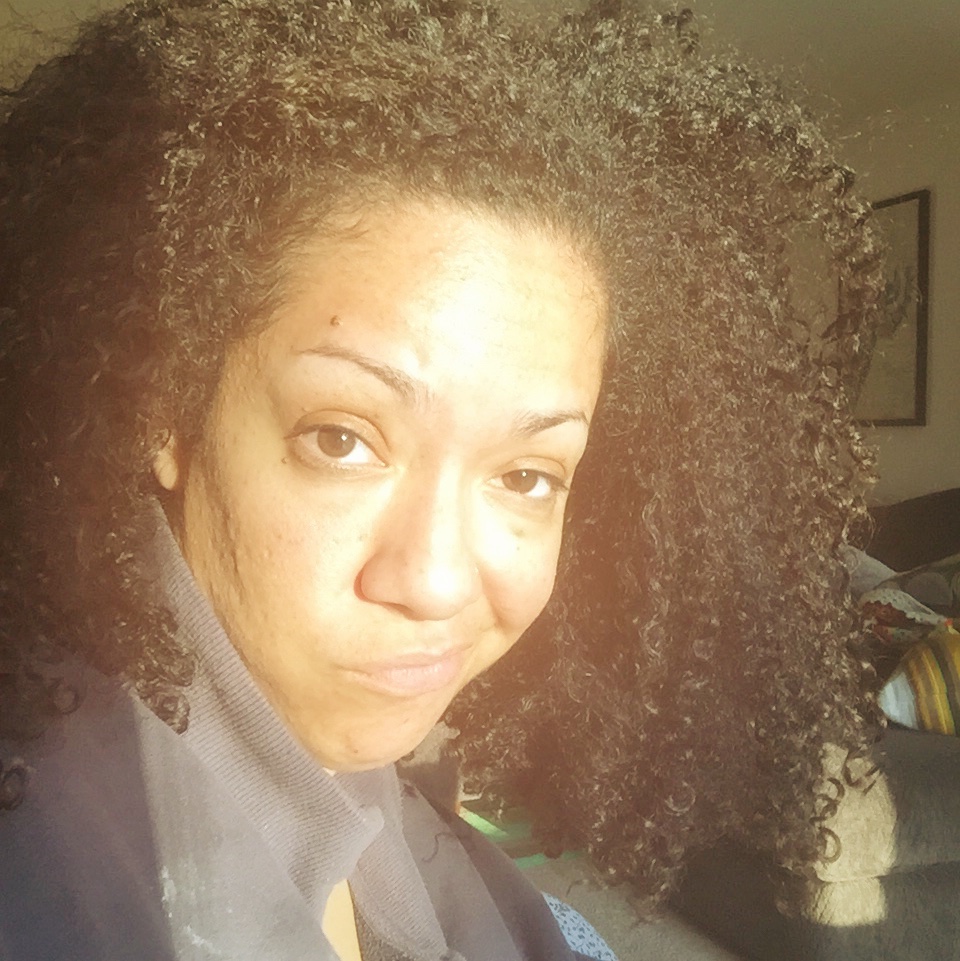 It is okay for me to exist here.

It is okay for you to love me as is.

It is okay for me to love me as is.

March 25, 2015 I Need To Say Something Entirely Different To White People
Recent Comments
6 Comments | Leave a Comment
"who thought that picture was a good idea."
Brandon Roberts What Are You Supposed To Tell ..."
"as a white guy who doesn't know that many black women i can't say if ..."
Brandon Roberts Why Are Black Women So Argumentative?
"Churches are boring.And people who listen to voices in their heads that nobody else can ..."
Ivan T. Errible What Gives Me Hope for The ..."
"Praise the Lord in all things"
Mr Kish Jars of Clay
Browse Our Archives
get the latest from
Progressive Christian
Sign up for our newsletter
POPULAR AT PATHEOS Progressive Christian
1

'But if it takes effort to...
slacktivist
Related posts from Everyday Black Matters