Back When I Was in Obedience School: 2015 Best-Of

As usual I will wander between “best” and “favorite” as I see fit. Don’t question me!

Wesley Hill, Spiritual Friendship: Finding Love in the Church as a Celibate Gay Christian. I reviewed it here and riffed on its relevance for married couples here.

Ethan Watters, Crazy Like Us: The Globalization of the American Psyche.

It seems weird to list a textbook here, but I’ve read and re-read Motivational Interviewing: Helping People Change (3rd ed.) throughout the year; I’ve been setting myself small MI-related tasks when I counsel, as exercises, in lieu of being able to take a class on it. I riffed a bit on MI here. I’ve been doing crisis pregnancy counseling for a little over ten years, but this year I felt some things shift around–I had a lot of conversations where using MI techniques helped my clients and me find a path forward, and this also made me more confident going into difficult conversations. There’s a mutuality and humility in MI which resonate with my deepest hopes for pregnancy counseling.

And Leah Libresco’s Arriving at Amen: Seven Catholic Prayers Even I Can Offer is a charming, weird little gem, but what has stuck with me the most is the kintsugi metaphor for confession. It’s beautiful and comforting–one of the best pieces of spiritual wisdom I encountered this year.

Best books read for the first time (real books): Wow, this was not a big fiction year for me. Samuel Delany, Driftglass. After that all I want to put on this list is Pierre Clitandre, Cathedral of the August Heat, A Novel of Haiti. Oh and Dostoyevsky’s terrible parties.

A ton of my reading time in 2015 went to revisiting Love and Rockets starting with vol 2 (Music for Mechanics is too expensive & I can’t find my copy) and I can tell you that not only is it still amazing, but it gets really good really fast. I know everyone tells you to read them in some weird order or to get the two big Palomar and Locas collections instead of the small graphic-novel serials, but I say plunge in, read in published order, and let yourself surf the waves of slight timeline confusion. It’s two linked short story collections, basically, plus a lot of stand-alones. Go in with that mentality and you will love it.

I also spent a lot of time working on my round-up of the best YA/middle-grade novels about addiction. With more here.

Best movies watched for the first time: Dogville. After the first 20 mins or so it seemed supercilious, and it had that greasy glee with which white Europeans poke their fingers into American racial conflicts. By the end it was just breathtaking: a devastating meditation, or interlocking arguments, on gift and desert. Something like Our Town (which I haven’t seen) + gangland noir + Deadgirl + the literal actual Gospels, only not… not quite.

The Look of Silence

Becket. Now here’s a weird movie. What actually is “the honor of God,” like what does that mean? Tempted to switch this with Liquid Sky but I think these lists are also sort of supposed to serve as recommendations so I will keep Becket at #5. You should watch it, although the royal family scenes dance around that line between “portrayal of an awful character” and “participation in that awful character’s misogyny.” Also, “the honor of God”? What even? Do people who know what things are, know what that is? Anyway what a love story–or a love triangle, really.

Also notable, in order of when I watched them: A Girl Walks Home Alone at Night, Maps to the Stars, Liquid Sky (holy cow, I watched this movie and now 82% of my friends’ aesthetic in high school is explained), Restrepo, It Follows, What We Do in the Shadows, Tapeheads, About Elly, The Host, Amy, Days of Glory, Three Kings, Changing Lanes, Goodnight Mommy, The Reckless Moment, Crimson Peak, The Saragossa Manuscript, Starry Eyes. ETA The Golem.

I also enjoyed the MoMA show on mourning couture but if I’m being honest it’s only on this list because I didn’t see enough art shows this year. The Harlem Public Library show “Unveiling Visions: The Alchemy of the Black Imagination” was also a solid, colorful, intro-type show of contemporary black genre work–fantasy, sf, horror, noir etc.

Best of other: I was pretty broke this year, so I didn’t see a lot of theater. Choir Boy at Studio was really good, turning what could have been a predictable lecture into a haunting fable; Winners and Losers at Woolly Mammoth was phenomenal. (More.) On the television (sort of) there was BoJack Horseman–read the comments on that article too. In music I super loved the Mountain Goats’ Beat the Champ, and I rounded up some Christ-haunted indie music women. And my review of Hamilton will come out in the new year but for now I can say it’s extraordinary–I keep using the word “exuberant.” ETA here you go.

Patricia Snow, “Dismantling the Cross.” I doubt anybody except maybe Snow agrees with this piece entirely, but it’s provocative and it asks many of the right questions.

Melinda Selmys’s series on Natural Family Planning. Maybe something of a niche Catholic topic but I think the reflections on conscience, suffering, and compassion in the face of the vast diversity of human pain might resonate with other readers as well. Starts with “NFP Wurkt Fur Mee!” and runs through “What Happened to the Post-Humanae Vitae Dream?”

Best articles by me: “Sociology as Class War.” I dislike some of my cattier lines here, and you should definitely check out the criticism in the comments, but I think my basic point is solid and important.

“What’s Hiding Behind Our Identity (Politics)?” lol this terrible title. I think the one I submitted it with was even worse though.

I also thought this interview RNS did with me turned out well.

Best blog posts by me: “Toller Cranston Skates for Mexico.” I don’t know if this “works” or “has a point” but it’s a cri de coeur and it cris like all get out.

“Fra Angelico and the Sex-Hating Church.” I like the questions I ask here, and I esp like that I don’t answer them. I still think about this stuff a lot.

“‘Lava’ in the Western World: Justice Kennedy and Pixar.” Gets puffy and tries too hard by the end, but “Lava” and its meaning is something I’ve found myself returning to in speeches throughout the year.

“In the Year of the Dragon.” An anti-anti-gun post I’ve had bottled up for a while.

I also wrote two posts about college ministry and gay people, which ended up touching on questions of vocation, the nature of love, the role of art and witness, and the sweet smell of success. One; two. In general you’ll find good stuff in the Gay Catholic Whatnot tag.

Recurring themes in my writing: We live in a bizarrely moralistic age; who will save us from our solutions?; acceptance is an act of humility and a sound epistemological strategy; you need kin; monastic love is the crown and model of all love. (Yes, I know the last two in some ways conflict.) Recurring thing that happened to me after my novel came out: People would quote bits at me and lol about how over-the-top the characters are and I would awkwardly think, Would it get weird if I said I literally just wrote down stuff I did?

Popular 2013 post by me that has aged least-well: “Francis’s Conservatism (Uh, Sort Of).” I like a lot of things about this minty man, our Pope–a friend said rightly that his visit to the United States was full of “icons of mercy“–but this specific point seems… wishful.

Article by me with which I’m least satisfied: that whole exchange with Justin Lee, where I kept changing the question.

Best novel by me (published): Amends. Purchase a copy today of the greatest novel ever written about reality-tv rehab, forgiving our debt collectors, and scrod.

December 31, 2015 "The Far-Out Sci-Fi Costume Parties of the Bauhaus School in the 1920s": Ring in the New Year Right
Browse Our Archives
get the latest from
Eve Tushnet
Sign up for our newsletter
POPULAR AT PATHEOS Catholic
1 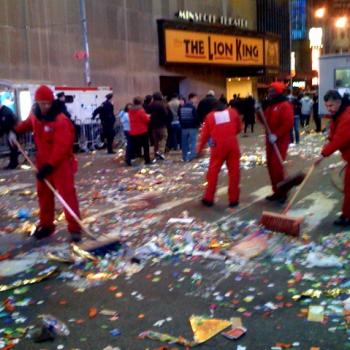 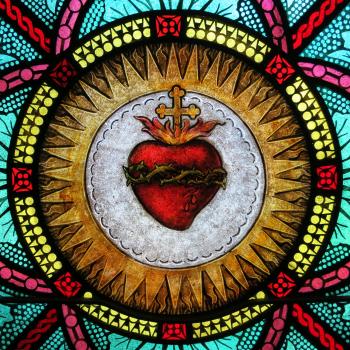 Catholic
Rockin' with the King of Babylon: 2017 Best-Of
Eve Tushnet

Catholic
Don't You Carry Nothing That Might Be a...
Eve Tushnet
TRENDING AT PATHEOS Catholic

Mind the Triumphalism re: #ACB
Suggested Bible verse for conservatives who are raucously celebrating the confirmation Amy...
view all Catholic blogs
Copyright 2008-2020, Patheos. All rights reserved.