Don’t Sing Louder – Do Something to Fight ISIS Genocide

When is singing hymns damning?

When the increased volume of the hymn singing is not out of passion for the Lord, but to drown out the cries for help of those destined for slaughter.

That was the indictment against some churches in WWII Germany within hearing distance of the railroad taking Jews to the concentration camps. I first heard this story, related in Erwin Lutzer’s When a Nation Forgets God, from retired U.S. Representative Frank R. Wolf (R-VA), who tells it to challenge American Christians:

Week after week the whistle would blow. We dreaded to hear the sound of those wheels because we knew that we would hear the cries of the Jews en route to a death camp.  Their screams tormented us. We knew the time the train was coming and when we heard the whistle blow we began singing hymns. By the time the train came past our church we were singing at the top of our voices. If we heard the screams, we sang more loudly and soon we heard them no more.

Some American Christians today are “singing a little louder” in these three ways:

Some Christians are afraid of being labeled Islamophobes. This paralyzes them into inaction, which is just what radical Islamists had in mind when they created the epiphet. There are some church leaders that are concerned that they will damage the “great progress” they have made in interfaith dialogues if they point to the jihad against Christians. Others worry that their outreach to Muslims will suffer if church members speak out about Islamists persecuting Christians.

When the President accuses those who believe that preference should be given to persecuted and threatened communities of using a “religion test,” some churches are reluctant to prioritize Christians and other persecuted minorities, even though the reality is that the “religion test” has been consistently used against the Christians.

Also, some Christians see America’s institutional sins as morally equivalent with global jihad, genocide, and caliphate building. They are eager to reach out in love to their enemies (without actually acknowledging they are enemies). Others write “love letters to ISIS” while neglecting the ancient Christian communities that ISIS is destroying, disobeying the Galatians 6: 10 mandate that other Christians follow.

And some church leaders, partnering with Christian agencies who are paid to resettle refugees, express doubt publicly about the “Christianity” of those that believe that it is foolish and dangerous to bring unvetted migrants into the United States. But these leaders do not criticize the Christian refugee resettlement groups’ lack of concern for the Syrian and Iraqi Christians left behind, who are not even safe in refugee camps.

We Have Our Own Problems

Another groups of Christians are those whose compassion for those suffering persecution tends to go no further than their own denomination or nation.

When faced with news about global Christian persecution they respond, “We’re being persecuted here in the United States, too!” They do not appear to have been disemboweled lately, or had a family member beheaded, but they see persecution in America as a clear and present danger.

There are testimonies of Christians from China and elsewhere declaring that they pray daily for Christians in the West to experience persecution because Western Christians are victims of their culture — materialism, entertainment, sensuality, etc., while Eastern Christians are being purified through suffering. But still, most American Christians would not be eager to change places with them.

Finally, there are Christians that don’t know what they can do to help. They remain either frustrated or passive, and “there’s nothing we can do about it” is their continuous refrain. (In all honesty, there are also some conservatives Christians that seem to take a perverse satisfaction in “cursing the darkness” of the present situation and don’t seem the least bit interested in “lighting a candle.”)

But there is always something that we can do. Even when we can do nothing else, we can pray. And we must do so — before, during, and after any other action. And any person who can read this blog post can also be an advocate for persecuted Christians, through becoming more educated, encouraging friends to advocacy, and supporting efforts to help through social media, etc.

Supporting a resolution that was introduced last fall by U.S. Rep. Jeff Fortenberry (R-NE) and  U.S. Rep. Anna Eshoo (D-CA) would help to ensure that the United States defends religious minorities from Iraq and Syria. The resolution, H.Con.Res.75, declares the atrocities against Christians and other ethnic and religious minorities by ISIS to be genocide.

Urgent action is necessary to pass this resolution because for months news has been leaked that the State Department is preparing to issue a genocide determination against ISIS, but to only include the Yazidis. The Christians and other beleaguered religious minorities would not be considered victims of genocide although genocide scholars, human rights experts, and witnesses from the region all have confirmed it. A February 16 article in National Review by human rights attorney and director of the Center for Religious Freedom at the Hudson Institute, Nina Shea, makes the situation quite clear.

A very helpful information sheet on genocide in Iraq is available from the 21st Century Wilberforce Initiative. And the Iraqi Christian Relief Council created a short (just over 5 minutes) documentary that has recently been released by Aleteia on the history of Assyrian Christianity and the diminishing presence of Christians in the Middle East.

The Omnibus bill that was signed by President Obama on December 18, 2015 contained a provision requiring Secretary Kerry to provide an evaluation to Congress of “the persecution of, including attacks against, Christians and people of other religions in the Middle East” and determine whether such attacks constitute genocide. That report, required within 90 days from the bill’s passage, comes due March 16, 2016. So a clear declaration of genocide from the Congress would go a long way to pressure the Administration to make the morally and legally correct determination.

In my next blog post I will offer 3 very simple things you can do to support immediately the efforts of Congresswoman Anna Eshoo and Congressman Jeff Fortenberry. But before that, to return to the theme of this post, I urge you to watch and share this short but powerful film (less than 12 minutes) “Sing a Little Louder” created by the group Catholic Witnesses, with Executive Producer Jason Jones (Bella, Crescendo, The Stoning of Soroya M).

We may wonder what we would have done in the place of the German church goers, but future generations of Christians need not wonder about us in the same way, if we just act. 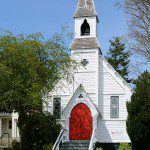 February 18, 2016 Beauty, Boudoir Photos, and Christian Women
Recent Comments
0 | Leave a Comment
Browse Our Archives
get the latest from
Faith and Chelsen
Sign up for our newsletter
POPULAR AT PATHEOS Evangelical
1