The Fellowship of The Suffering

The Fellowship of The Suffering February 2, 2016 Faith J. H. McDonnell

Those who previously were uninformed about – or in denial of – the severity of the trials that face Christians around the world have had to come to grips with the graphic images of martyred men in orange jumpsuits on a Libyan seashore. Multiply those martyrs by the millions and spread them throughout punishment and prison camps in North Korea, scorched-earth villages in Sudan, bomb-blasted churches in Pakistan, house churches and police stations in China, corpse-lined streets in northern Nigeria, etcetera, and it’s the Fellowship of The Suffering.

I didn’t know personally Reverend Mehdi Dibaj, sentenced to death for apostasy from Islam. But after reading his courageous testimony given before the Islamic court in Iran, and writing about his case in hopes of helping mobilize the world to speak out for him, it felt as if I knew him. We all rejoiced in January 1994 when he was miraculously set free. But we grieved just three days later when we heard that the man who told the world about Mehdi Dibaj, Bishop Haik Hovespian Mehr, had disappeared. His tortured body was found days later. And we grieved again in June of that year when the same thing happened to Mehdi Dibaj.

I did know Shahbaz Bhatti, valiant defender of human rights and the only Christian government minister in Pakistan. I had known Shahbaz for some ten years before he was brutally assassinated in March 2011 sitting in his car in front of his mother’s house. I grieved for my friend Shahbaz, who died in a hail of bullets, killed by Islamists who hated him for trying to bring justice against Pakistan’s egregious blasphemy laws. Shahbaz understood the ramifications of his commitment to the persecuted minorities and to his Lord Jesus Christ so well that he never married for fear of subjecting a wife and children to the loss of husband and father. I continue to grieve, especially when I watch the video he made with the BBC just four months before his martyrdom, when he declared, “I am following the Cross, and I am ready to die for the cause.”

The longer I have been an advocate for persecuted Christians, though, the more personal it has all become, whether it is the murder of a South Sudanese Archdeacon during a Holy Communion service, or the slaughter of some 150 Kenyan college students during Holy Week. And, I believe, the more personal it should be for all Christians.

We are all members of one Body. St. Paul says in 1 Corinthians 12: 26, “If one part of the body suffers, all the other parts share its suffering.” In Philippians 3, Paul said that he wanted to know Christ not only in “the power of His resurrection,” but also “the fellowship of His sufferings.” That Paul! Always pushing the envelope! We may never face an executioner’s sword, like Paul, but we Christians in the West can share in the fellowship of Christ’s sufferings too, when we share the suffering of those in Christ’s Body who are part of the Fellowship of The Suffering.

The beautiful song by Matt and Beth Redman speaks of blessing the name of the Lord in all circumstances – in plentiful lands, in streams of abundance, in desert places, in the wilderness. . . and then declares:

Every blessing You pour out, I’ll turn back to praise.
When the darkness closes in, Lord, still I will say,
“Blessed be the Name of the Lord.”

We really like that first line! Sometimes when churches use it in worship they just repeat that line about 10 times, eyes closed, hands uplifted. Yes, Lord! Every blessing You pour out, I’ll turn back to praise! Then a perfunctory rush through the unpleasant part and back to the praise!

But the Fellowship of The Suffering is more familiar with the second line. They have seen the darkness close in, in the rolling tanks and trucks of ISIS, on the galloping horses of the Janjaweed, in the relentless attacks of Boko Haram. They are the testimony of faithfulness that still says, “Blessed be the Name of the Lord.”

The second verse of the Redmans’ hymn continues the theme. “Blessed be Your name on the road marked with suffering, though there’s pain in the offering.” Of course we in the West have experienced suffering, pain, and tremendous loss. But few of us have had to flee from our homes, and then again, still traumatized, flee from the place where we thought we had found refuge. But that is what thousands of Iraqi brothers and sisters have experienced on “the road marked with suffering” from Mosul to Qaraqosh to Erbil.

This blog post is not meant to inflict guilt. Well, maybe a little. . . I am Irish, after all! But it is meant to remind you when you sing hymns on Sunday – be they this one, or more traditional ones like “A Mighty Fortress is Our God” don’t focus on your enjoyment of the praise so much that you neglect the Fellowship of The Suffering. Don’t be afraid to allow the image of the martyred Christians on the beach in Libya to come to your mind as you sing, “the body they may kill.” Let it remind you to pray for the worldwide Body of Christ, the faithful who have died for Jesus. His Kingdom is forever. 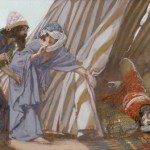 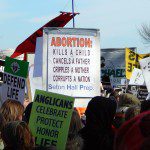 February 3, 2016 Why Abortion is Pro-Nobody
Recent Comments
0 | Leave a Comment
Browse Our Archives
get the latest updates from
Faith and Chelsen
and the Patheos
Evangelical
Channel
POPULAR AT PATHEOS Evangelical
1

Evangelical
Found in the Files: An Excursion through 25...
Faith & Chelsen
TRENDING AT PATHEOS Evangelical