Smashing Mirrors in the Caliphate, Part One

So They Destroy Those Who Reflect His Image

They hate the Image reflected in the mirrors.

with their knives and guns and bombs,
and their crucifixions and abductions,
and their rape and enslavement,
and their marking of houses with threats, forcing thousands to flee,

are powerless to stop Christ and His Kingdom.

Their threat mark literally has multiplied across the face of the earth as Christians and others, including sympathetic Muslims, wear pins and t-shirts and mark their social media with the  ن (N) for “Nazarene,” the epithet meant to insult the indigenous Christian Assyrians. Little did the Islamic State know that they were marking the Christians with the very  imprimatur of the Kingdom that one day will ensure that their Caliphate is obliterated.

They can’t stop Christ, but they are smashing the mirrors that reflect His image.

This was how Father Douglas Bazi (Doglas Yousef Al Bazi) explained what is being done to the Assyrian Christians by the Islamic State. (“Do not call it ‘ISIS’ or ‘ISIL'” he instructed. They are an Islamic STATE, following Shari’a and the Koran “word for word.”)

Speaking at the Catholic Information Center in Washington, DC on May 10, Bazi, a Chaldean Catholic priest, said that the Church of the East was a Church of martyrs, a Church of the blood of martyrs. “There is more blood than there is oil in the Middle East,” he declared, “but no one cares about our blood.” Bazi would know. He takes care of thousands of Iraqi Christians that the rest of the world seems to have forgotten even as it welcomes others who claim to be fleeing the violence in Syria.

Now there are less than 200,000 Christians. The Church has been broken and smashed. But when a mirror is smashed every tiny piece becomes another mirror, another reflection, Bazi reminded his listeners as he described what the Church has suffered under Islam. “They are still showing the reflection of Jesus in the broken pieces of the mirror,” he said. His talk focused on the situation for Christians since 2003, but before the coming of the Islamic State, what is happening under the Islamic State, and what will happen in the future.

Before the coming of the Islamic State the Church’s buildings were blown up by Al Qaeda. It was after Pope Benedict XVI’s historic lecture at Regensburg (which went completely over the heads of most Westerners, but of which the Islamic world clearly understood the significance) that Fr. Bazi’s Baghdad church, St. Elia, was bombed for the second time by Islamists. Bazi explained that he “flew into the air” at the bomb blast, and that he lost his hearing for a short time. After the bomb went off, the militia opened fire on his church and he was shot in the leg from a distance of about 50 feet by a jihadist “with an AK-47.”

As if that was not enough suffering for one person to endure, Bazi, somewhat reluctantly and almost dismissively, told about his kidnapping by Islamic militants. The priest did not speak about this for some time after it happened. He did not want people to “feel sorry” for him, he explained, when the whole Church was experiencing such suffering, and Al Qaeda’s attacks on church buildings had turned to attacks on church leaders. But he finally realized that his own horrific experience was a testimony to what the Iraqi Christians are now enduring and he wanted to be “a voice for the Christians in Iraq.”

Bazi was kidnapped in November 2006 and held for nine days. He later reported that he noticed that the Iraqi police and army were complicit with his abductors, allowing them to pass through checkpoints with no search. At first, the captors told Bazi that they were asking a ransom of one million dollars for him. He told them that they might as well forget it and kill him because the Church would just “consider him one of their martyrs” and that “it was better to be dead in the hands of God than alive in their hands.”

Furious, the Islamists threatened to cut his head off and replace it with a dog’s head because that is what he was — a dog, an infidel. But instead of killing him, they tortured him, keeping him without water for 4 days. And this mirror was indeed smashed — with a hammer. The jihadists hit him over and over in the face, knocking out teeth, and in the knees, as well as breaking two vertebrae in his back. Bazi said that he remained silent during the torture because he “didn’t feel he had the right to complain.” To be a Christian in Iraq, he said, “is a one-way mission.” At the end of Mass the priest kisses the altar and says goodbye because he doesn’t know if he will celebrate Mass again.

Using as his rosary the links of the chain with which his captors had bound him and beat his back, Bazi “became calm and strong” as he prayed. So strong, in fact, that he could treat his tormentors with love. The very men who tortured him at night would ask for his advice and even ask for his forgiveness during the day.

Bazi was released after the Church paid a ransom of $170,000 for him and another priest, Father Samy Al Raiys, the rector of the Chaldean Catholic Seminary. He now views his experience as being in the Providence of God. He is able to encourage and inspire the beleaguered Iraqi Christians who he now takes care of Irbil, Northern Iraq, by the testimony of his own suffering in captivity and of his deliverance.

(Part Two of this blog post will focus on the plight of Iraqi Christians under the Islamic State, and what Christians in the West should be doing to aid their brothers and sisters.) 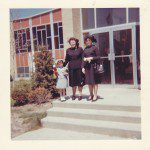