The Siren Song of Persecution: On Californias “Worship Ban” 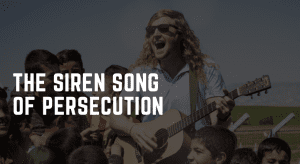 As a former evangelical, I am never surprised by the faux outrage that is often expressed by my former tribe. One of the key reasons I left the evangelical movement was precisely because it was rooted in fear– not legitimate fear, but manufactured fear. The irony is not lost on me that a movement that both prides itself on being deeply rooted in American values and history nonetheless expends an ungodly amount of energy fighting the “persecution” that America is unleashing on them. They needed to feel like their faith was legitimately true and authentic to the way of Jesus, so evangelical leaders manufactured claims of persecution and oppression in order to convince their congregations that Jesus’ words about true disciples were true about them:

So, it’s not shocking that right now, in the middle of a global pandemic, California evangelicals have manufactured a persecution narrative based around the State of California’s order that states public signing isn’t allowed in any indoor environment during the COVID-19 pandemic. To the rational person this order should make perfect sense: We now know that COVID-19 is spread most effectively indoors and that it’s aerosol particles that are produced when humans speak, sing, cough, or sneeze linger in the air for far longer than we expected, which significantly increases the likelihood of spread.

California has allowed for religious gatherings of less than 100 people to accommodate the needs of those whose faith traditions mandate that they be allowed to gather, even though the science says that any such gathering that takes place indoors is extremely dangerous. So, one-way California has sought to ensure the health and safety of those who do gather indoors for religious services is to say that congregational singing is not allowed. To the rational person, this is a very reasonable regulation.

As a pastor of a church in California, I find it troubling that California is even allowing religious communities to gather as they are, because the truth is that for most faith traditions, large gatherings may be traditional, but they are not essential. And yet our so-called “anti-Christian”, “anti-religious freedom” state has accommodated to the requests of religious communities even during this unprecedented time of crisis. And again, with this accommodation, the public singing recommendation seems more than reasonable.

Yet for many California evangelicals, this so-called “ban on worship” is just another sign of the demonic agendas of our liberal state to take glory away from God and stifle the voice of Christians. One of the unsurprising voices stoking the outrage against our state is none other than Sean Feucht, a worship leader from the controversial Bethel Church in Redding, CA, who also just loss his own bid for office in California District 3’s congressional race. He’s been encouraging his followers on Twitter to “sing louder” and gather together to “worship God” in a defiant resistance against California’s attempt to stop worship. He told Fox News “We’ve spent the last 20 years mobilizing worship in places where it is illegal. Never in my life would I believe that it would be California in 2020.” Similarly, many other evangelical pastors have publicly committed to gathering their congregations to sing and worship God to send a message to Governor Gavin Newsom that he cannot ban the worship of God.

As a California Pastor, I feel responsible and yet embarrassed to have to state the following: The California “ban on worship” is not a ban on worship but a ban on gathering a hundred people in close proximity in an indoor space (usually without masks) and signing. Why? Once again, because this is a proven way to rapidly spread the COVID-19 virus and kill your congregation. Comparisons to protests are moot- the science shows that outdoor gatherings are significantly less dangerous because the aerosol particles are diluted by blowing winds and the fresh air- and there have been almost no confirmed cases of COVID-19 from Protests yet thousands of confirmed cased from indoor religious gatherings.

If an order from California’s governor to protect the people who gather in (unessential) religious services is seen as an affront to God and religious freedom, while a call from politically corrupt worship leaders and pastors to gather and “sing louder than ever” in a way that almost guarantees the spread of this deadly disease is seen as holy resistance, it seems to me that the evangelical movement has once again shown it’s cards. It’s not committed to the Gospel at all. It’s not committed to living out the commands of Jesus to love God through loving our neighbors. Instead, it’s committed to maintaining political power at all costs by creating fake crises and persecution narratives all while literally jeopardizing the lives of the masses of people who will heed their ungodly siren song to their peril.

July 19, 2020 Why Joe Biden Is The Clear Christian Choice In 2020
Browse Our Archives
Related posts from Faithful Progress

Politics Blue
Digital Deception: How We Ended Up Here And...
Faithful Progress

“The evangelical vote is more diverse than you...
Rev. Jim Ball, EFB Co-Chair, is one of the voices featured in...
view all Politics Blue blogs