Digital Deception: How We Ended Up Here And What We Can Do To Save Ourselves 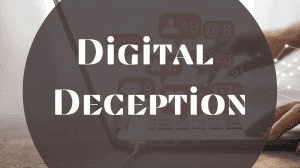 The American experiment has reached its moment of reckoning, and we seem completely unprepared to make the right choice. Our differences have been so exacerbated in this moment by the echo chambers of social media that we are living in two fundamentally different realities. As our lives have gotten less personal and more digital, we have seen the erosion of a sense of common purpose or meaning with our neighbors, which has too easily enabled us to begin to demonize and scapegoat those who see the world differently as our fundamental enemies.

Before the digital era, we were required to have meaningful social interactions with others daily. In the midst of these interactions, small talk would emerge that often would lead to conversations about differing perspectives. Gone are the days where we know our grocery clerk by name or even stop by our neighbors house just to check in and say hello. In this new era our grocery clerks are Amazon Fresh and we don’t even know our neighbors name.

What’s odd as I write this is the realization that as a millennial, I actually have no memory of these “old fashioned” times where socializing was a required daily action. Most of my life, except a few years of childhood, has been completely digital. Since my teenage years, I have spent most of my days with a phone in my hand or sitting in front of a computer. And because of this, my own social skills are shoddy to say the least. The amount of social anxiety I have talking to my new roommates makes the thought of having a conversation with a random neighbor seem unlikely.

But put me in front of a screen and I can converse like no other. Except that for most of us, the person we are in the digital world is very much unlike the person we are in real life. On my Facebook comment feed, I am a opinionated firebrand who is ready to spar with any ideology I disagree with. Despite how hard I try to remember that the person on the other side of the screen is in fact a person, it seems impossible to interact with them in any way other than as a disembodied ideology. And in an era where conversational skills have become obsolete, what could be a civil ideological debate quickly devolves into personal attacks and shockingly swiftly can turn to threats and hate speech.

Yet this is how we socialize. This is how we converse. This is how we consume information. And our social media algorithms are designed to gradually weed out people who don’t agree with our worldviews, so moment by moment, we find more people, read more articles, and see more video clips that reassert our own view of the world while also caricaturing and demonizing our others. We begin to believe our perspective is valid and right- even righteous- and this is psychologically reinforced by getting likes and comments and retweets and shares when we post a zinger status or tweet that usually belittles our ideological others. The dopamine released when we see fifty likes or one hundred retweets literally makes us addicted to the affirmation we’re getting, and since we’re not socializing with others in the real world, this is often the only affirmation we get.

Enter a global pandemic, and things get more grim much quicker. For millions of people, even limited human interaction has disappeared completely. Now, we are all living in an almost entirely digital reality. We are spending every hour of every day in front of TV, computer, phone, and iPad, endlessly consuming content that reinforces our beliefs while demonizing the others.

In this environment, fringe conspiracies begin to rise in prominence- one person shares a graphic with a conspiracy theory and soon its shared to thousands who are also finding Facebook groups and Redditt feeds with folks that share their same frustrations with our country also buying into elaborate conspiracies, and the next thing you know they are getting social affirmation and dopamine hits and a sense of purpose while sitting on their couch with their computer on their lap and Newsmax on their television.

Our social isolation, our lack of a sense of meaning or purpose, our deep dissatisfaction with the way our lives are working have created this moment of acute existential crisis. This moment of fear and frustration has created an era of tension where at any moment we’re all ready for a revolution. Who can blame us? The world from our computers is black and white. It is on the edge of destruction. And after almost a year of social distancing, sickness, job loss, and political divisiveness, any opportunity that allows us to come together physically, with a sense of purpose and mission, seems exceedingly worthwhile.

Cue a year of protests and demonstrations. Many of these were justified, to be sure, and the increased amount of tangible activism among ordinary people in this era has been mostly inspiring. Being isolated has also given people time to do research and to contemplate some of the major injustices in our nation and find the courage to begin to speak up about them. But it also seems fair to assume that if we had not been in this era of isolation and endless media consumption, the responses of the masses would not have been so extreme.

On the right in particular, as the divisive President of the United States continually claimed that he had won the election in a landslide, that there was widespread fraud, that it was being stolen from the American people, and that Marxism was about to dominate the country- all of which was being echoed in the conservative digital world and repeated on conservative media- is it any wonder that thousands of people used those credits from their canceled vacation flights to flock to D.C. and siege the Capitol?

Our digital reality has disconnected many of us from the real world. Many of us have been lured into ideologically extreme positions by the echo chambers that have been established. Many of us have given up critical thinking in exchange for parroting the talking points of our “team”. Many of us are afraid to question the orthodox views of our political party or the widely accepted claims of our echo chamber for fear of being on the receiving end of demonization, being labeled as one of “them” on the other extreme.

Most dangerously, many of us have lost our ability to empathize with other humans who have different experiences that lead them to different conclusions. Instead of neighborly debate, we are always poised for war. And the war of words that begins on a social media thread has the very real potential to spark actual violence in such a hopeless moment of American history.

There are plenty of other reasons, beyond isolation, digital reality, and a loss of purpose that have created the moment we’re living in. If we make it through, sociologists, political scientists, philosophers, and historians will write volumes on the complex realities of this era. But at the most fundamental, individual level, it seems to me that if there is any hope of making past these dark days, it begins with each of us choosing to rebel against the systems and structures that are exacerbating our divides.

These questions may seem overly simplistic, and I am certainly not the first to pose them. But if we are not willing to ask them of ourselves and honestly reflect on our answers, I have very little hope for Americas future. It is true that the problems our country faces are systemic and generational and will take much more than a social media sabbath, a few real conversations, and some reading to address, but I am convinced that if we as individuals are not willing to begin to deprogram ourselves and rebel against the digital deception we’ve all been living in, that very little work will be done that can create the more just and equal country that we all ultimately long for.

Politics Blue
On The Fall Of American Democracy
Faithful Progress

Evangelical Testimony on Why No Christian Should Vote...
At the Evangelicals For Biden Campaign, our name, basically, says it...
view all Politics Blue blogs
Copyright 2008-2021, Patheos. All rights reserved.
Close Ad