Jesus Was a Social Deviant: A Brief History of WASP-y Assimilation in America. 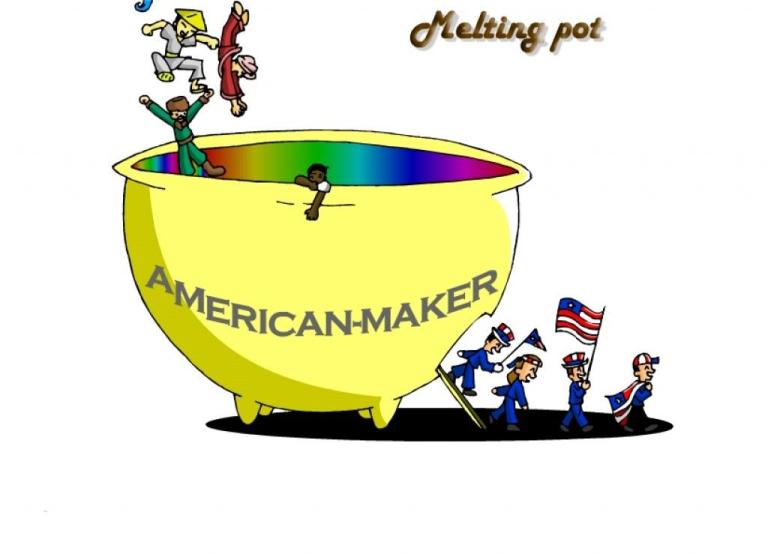 Americans like to say that this country was founded on the ideals of religious freedom. That sounds good, doesn’t it? Another concept that goes hand-in-hand with that is the “American Melting Pot.” That concept is stitched into to American fabric so much that it would be the first thing that came to mind to many Americans if you’d ask them what America means to them. But really, it’s one group of Americans that would answer that way, White Anglo-Saxon Protestant Americans (WASPs). If you don’t fit solidly into that WASP category, your perspective on America is likely very different. A solid case could be made that the entire history of America is about WASPs fighting hard to maintain their status as the predominate culture in America. It’s been that way since before the very beginning and it’s most certainly still that way now. WASPs have always wanted America to be a melting pot, but it just isn’t; it’s a stew.

America’s social class system has always been structured like a ladder full of WASP-y rungs. The more rungs you can climb, the more secure your place in society is. If you can tick off all parts of the WASP acronym, you have always had a great advantage over anyone else struggling for a sliver of the American pie. “W” has always been the most important rung to achieve. If you were white, you had at least a foot in the door. But if you were say, a white Catholic or Jew, you had a lot to overcome to climb much higher. If you were an Irish, or Italian, or eastern European and white, you had a whole other level of challenges to overcome. If you were black, or Hispanic/Latino, or Asian, or Native American, good luck. If you had some of the disadvantages from the W, A, or S, column, but were a Protestant Christian, you had some hope of rising a little above those others who looked like you but didn’t share your faith. It’s a pretty complicated formula, but if you lived here in the U.S., you learned it pretty quickly and your life became more or less challenging based upon where you fell on the WASP scale. And before I forget, let me add this; WASP isn’t even an adequate acronym because it’s missing an incredibly important piece. There really needs to be an “M” for male, because even if you were VERY WHITE, and VERY ANGLO-SAXON, and VERY PROTESTANT, if you were a woman, it didn’t do you any good.

As I stated in the opening, this has been the case since before our nation even existed. The second English colony founded in America was Plymouth. It was the voyage of the Pilgrims aboard the Mayflower in 1620, which first gave birth to the idea that America was founded on religious freedom. The Pilgrims, known as Separatists, back in England, were tired of being persecuted in their home country simply because they didn’t want to follow the law which said you had to be a member of the Church of England. So, they risked life and limb to make a perilous journey across the raging sea to establish a colony where they’d be free to worship God in the manner they wished. So inspirational, right? Not so fast. It turns out that the Pilgrims and the Puritans who joined them a short time later were really only interested in setting up a colony with just as rigid a set of religious laws as they had left in England. Only, this time, they made up the rules. Massachusetts Colony quickly became a place where only Puritanical Protestantism was welcome. People who disagreed with the policies there were swiftly sent packing. Before long, new colonies were being established (see Rhode Island, and Connecticut) by folks who were not following the Puritan game plan in Massachusetts. It seemed that religious freedom was all well and good as long as it was the right kind of religion. Does this ring a bell?

The entire history of America since then has just been the same lipstick applied to different pigs. How about the wonderous age of Manifest Destiny, where America took it as literally a mission from God to expand our boundaries from sea to shining sea. This required doing all manner of un-Christian actions such as the forced Indian removal and Trail of Tears and declaring an unprovoked war with Mexico after which we forced them to fork over the Mexican Cession, which included two of our biggest and most profitable states, Texas and California. The story of the Civil War is tangled up in various interpretations and misinterpretations of Christianity. Southerners felt they were doing God’s work by looking after the “spiritual well-being” of over 4 million enslaved African American “savages” who’d have been doomed to eternal fire and brimstone were it not for their pious benevolence. Meanwhile, a small but impactful group of Christian deviants were hard at work in the illegal abolitionist movement and Underground Railroad. This whole story didn’t end with the Civil War, it followed us for 100 years of Jim Crow laws, legalized segregation, and institutionalized racism, right through the Civil Rights movement of the 1950s, 60s, and 70s, and right on up to today’s racially tense America. Afterall, which group of Americans pushes back most vehemently against such things as athletes making respectful gestures to raise awareness to the cause of minorities suffering in this nation? Is it not WASPs?

I would argue that WASPs are more aggressive today than they have been in a few decades for a couple reasons. They had a president for 4 years who said out loud the things that he knew would stoke up their greatest fears about race and religion. Trump came along at a time when WASPs were already beginning to feel paranoid that their 400-year status as America’s predominate culture was beginning to slip from their grasp. The most recent census data shows that America is rapidly becoming less white and less Christian. Demographers predict that within the next census or two, America will no longer be a majority white nation. As of the 2020 census, the U.S. is only 57% white. Before long, America will change from majority to plurality white. And every study out there shows that the number of Americans who identify as evangelical Protestants is on a steady decline. Trump blew all the dog whistles that the remaining WASP-y evangelicals wanted to hear. With their guy in the White House cheering them on, WASP-y evangelicals got very bold and very vocal. They have been attacking institutions that they see as a threat to their 400-year reign. They have gone after public education, they have been banning books, they have been attacking the freedoms of the LGBT community, women, and immigrants. They have declared war to protect their status. All the while, they have carried the banner of Jesus Christ.

For over 400 years now, WASPs have been missing a crucial part of the story of Jesus. Jesus was a social deviant. He was always at odds with the religious establishment of his day. If Jesus had been a Puritan in Massachusetts, you can just about bet your behind that he would have been one of the first ones excommunicated, and he would have taken all the marginalized of society with him.

March 21, 2022 Gas Prices: What Would Jesus Pay?
Recent Comments
0 | Leave a Comment
"Beyond opinion, ideology, and hyperbole, in the excerpt of Locke's message I count five statements ..."
David N. Gray Can a Democrat Be a Christian?
"There is also the corollary question that havent asked yet, but that they will ask ..."
Raymond Can a Democrat Be a Christian?
"good article overturning roe v wade will not stop people from getting abortions it will ..."
Brandon Roberts Abortion Ban Questions Christians Should Ask ..."
"Churches are shrinking like the polar ice caps, they have delusions of relevance."
Nixon is Lord Jesus and Elon Musk: America’s Income ..."
Browse Our Archives
Related posts from Empathy Mining