The following are my remarks made at The Global Interfaith Commission on LGBTQ+ Lives at Westminster Abbey on December 16, 2020.

Good morning from San Diego, California everyone. It is such an honor to be joining you all this morning for this incredible and 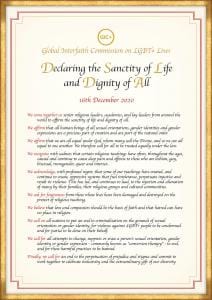 important moment in the history of the LGBTQ+ faith movement globally. I am so honored to be joining so many friends and colleagues from around the world, and am so grateful to my friend Jayne Ozanne and the Ozanne Foundation for working hard to make this moment a reality.

When I was but twelve years old, I remember sitting in the pew of my evangelical church in Baltimore, Maryland, and hearing our pastor declare with authority from the pulpit that the “gay agenda” was an affront to our Christian faith and that true followers of Jesus must stand against LGBTQ+ rights for the sake of the gospel.

His powerful declaration was met with “Amens” from across the nearly 3,000 people gathered in our sanctuary that morning. And there I sat, a young boy, who knew that he loved Jesus Christ and felt called to serve God as a pastor, but also knew that deep down, the pastor was preaching against me.

And thousands of people around me, who followed the same Jesus, whose lives had been transformed by believing in the same good news of love, were joyfully and enthusiastically affirming that people like me were dangerous. We were flawed. We were abominations.

As all of us gathered today recognize, this message was not unique to my local congregation. This is the message that has been preached with passion in every corner of the globe by Christians and our siblings of other faiths alike.

Religiously rooted prejudice against LGBTQ+ people has unfortunately been perpetuated as normative and even holy be the world’s most prominent religions. And this teaching, which to many seems to be nothing more than a mere basic sexual ethic, has evolved to become fuel for personal and institutional discrimination, marginalization, and violence around the world.

In 2015, I was honored to serve on the United States Department of States Working Group on Religion and LGBTQ+ Rights Globally, spearheaded by U.S. Ambassador Randy Berry. During that time, my eyes were opened to the extent of religiously rooted prejudice that extended around the world and impacted millions of precious LGBTQ+ lives globally.

In the United States, fellow evangelical ministers were literally traveling around the world to fuel and fund anti-LGBTQ+ legislation that not only promoted discrimination against LGBTQ+ people, but actually advocated for our execution. They were doing this in the name of the same Jesus that I worship and follow, the radical Rabbi from Nazareth whose teachings were summed up in a simple command: “Love the Lord your God with all of your heart, soul, mind, and strength, and Love thy neighbor as thyself.”

Then and now, I fail to see how anyone could interpret those simple and profoundly clear words in any way that would justify the execution and discrimination of anyone. And yet, this is in fact what has happened and continues to happen in the name of God around the world.

Perhaps less extremely, but no less harmful, is the practice of conversion therapy which continues to take place in every corner of the globe.

When I was a student at the Moody Bible Institute in Chicago, the evangelical school founded by the renowned U.S. evangelist Dwight Lyman Moody, I was told that unless I underwent spiritual counseling to change my deviant sexuality, that I would not be permitted to graduate and would prove myself to be apostate. Under such pressure, I began reading reparative therapy textbooks in an attempt to change my sexuality and become heterosexual. I began meeting weekly with a professor who utilized a technique called “healing prayer” to lead me towards healing from my homosexuality.

Every week, I would enter her office, and be asked to give an account for all of the sinful thoughts I had emerge over the past week related to same-sex attraction. I would then be led into a time of intense prayer where I was forced to renounce these desires as demonic, and seek to expel the devils influence from my life. Following this time of repentance, I was then asked to recount times in my childhood where I had experienced abuse from my father, and we would invite God to move through time and heal those wounds- because if they would be healed, my sexuality would as well.

After being washed with holy water and oil and being asked to make a commitment to continue to reject my sexuality, I would be sent off to my dormitory to continue to pray and fight against this part of my God-created identity. And I wrestled sincerely for an entire year.

The anguish that emerged every time I realized that the prayer, the repentance, the reliving of past abuse was not working- it was not healing my sexuality- was overwhelming.

When young people internalize these beliefs, the trajectory is certain: shame turns into self-hatred and self-hatred turns to despair and despair, when it is fully formed, gives birth to self-destruction and death.

This is not an overstatement. I found myself on the brink of suicide many times as a result of my experience seeking to change my sexuality, and the version of “conversion therapy” I experienced was relatively mild. Those who are sent away to camps and to church programs are often accosted and abused until they choose to live a repressed life or to end their own lives.

But even beyond these more extreme examples of the violence faced by LGBTQ+ people at the hands of religious people, it’s the subtler, daily prejudice that emerges from within the hearts of people of faith around the world that I believe is even more insidious and damaging.

Billions of people around the world will sit under a religious leader who at one point or another will teach a message of the inferiority of LGBTQ+ people. Whether explicitly stated or implied by heteronormative standards being promoted, billions of people of faith are being taught to fear LGBTQ+ people, to see us as broken and flawed, to see us a deviant or dangerous.

And as those messages are internalized, they translate to action. They result in parents refusing to talk to or acknowledge their children after they come out as LGBTQ+. They result in young people bullying and harassing LGBTQ+ children in their school or on social media. They result in LGBTQ+ being ostracized by communities and isolated from networks of support. They result in acts of physical, emotional, and spiritual violence.

Prejudice and discrimination are learned behaviors. They find their genesis in ideologies of fear, which leads to scapegoating. When the majority of the world, who is heterosexual, looks at the minority of the world, belonging to the LGBTQ+ community, often the posture is fear and disgust. Such a response comes as a result of lack of experience and lack of relationship with us- those who are different.

You see, it’s easy for us to demonize from a distance. But it’s much harder to demonize when we’re standing face to face. When we see one another as human beings made in the image and likeness of God, as the Hebrew Bible declares.

This is why todays Declaration is an important first step towards justice and equity for LGBTQ+ people: the world needs to see and hear that faith leaders are stepping up to the plate, owning our traditions sins and failures, and a committing to work to a more inclusive world and religious community for sexual and gender minorities. The adherents to our faiths need to see us, clergy, theologians, activists, and leaders, repenting of our own sins of discrimination and misusing our holy texts to abuse others. They must see us setting the example, and they must be encouraged to follow suit.

But let us be clear that this is a first step. Much more work must be done. We must be willing to go much further. This resolution, as hearty as an undertaking as its been, is simply not enough. It must be for us a convening tool that is utilized for tangible action in the new year.

We must demand that foreign governments decriminalize LGBTQ+ identities and relationships.

We must begin the deep theological conversations within our denominations and traditions, seeking to rediscover an inclusive theology for all.

We must work to ensure that conversion therapy is banned in all of its forms in every country around the world.

We must ourselves commit to preaching and embodying a message of true inclusion and radical embrace in the year ahead.

If we are to confront the discrimination and prejudice that I have experienced as a queer Christian man, that millions of others of LGBTQ+ people experience every single day, we must take seriously this moment and be willing to work together to plan bold and revolutionary actions in the name of the common love that all of our traditions call us to embody.

At every level of governance- religious and societal- may we use our collective voice and influence to create the more just and equal world for LGBTQ+ people that our hearts know is possible.

And for those of us that are LGBTQ+ people attending today, it is my sincere hope that we will commit ourselves to this work of reform for the sake of all of those who will come after us. Because we have fought, and many have fought before us, in order to claim our place within our faith communities.

But no one should have to fight to be welcomed to worship God. To seek enlightenment. To journey towards inner peace. The same Spirit that was at work in our prophets, sages, and seers is at work within the hearts and lives of LGBTQ+ people, and I believe with all of my being, that the Spirit delights in each and every one of us.

Let us commit ourselves to work to make that inner spiritual truth and outward lived experience for all LGBTQ+ people of the world.

Thank you so very much.

Politics Blue
Digital Deception: How We Ended Up Here And...
Faithful Progress

“The evangelical vote is more diverse than you...
Rev. Jim Ball, EFB Co-Chair, is one of the voices featured in...
view all Politics Blue blogs