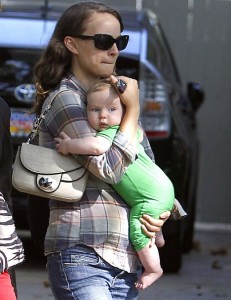 Israeli-born actress Natalie Portman has been vocal about her Jewish faith, even speaking out against Dior designer John Galliano (who was fired from his post after making anti-Semitic comments) despite being the face of a Dior perfume. Now, she’s showing her commitment to raising newborn son Aleph in the Jewish faith. In a rare public appearance since her son’s birth, Portman was photographed attending services at Ohr HaTorah synagogue in Los Angeles. Aleph, whose name is the first letter of the Hebrew alphabet, is quite the cutie. As for his dad, Benjamin Millepied, rumor has it that the Catholic-raised dancer and choreographer is in the proces of converting to Judaism so that he and Portman can marry.

October 24, 2011
Rose McGowan Talks About Escaping The Children of God Cult
Next Post