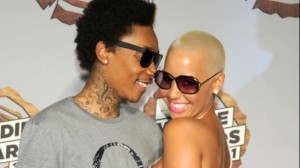 Model Amber Rose, who is dating/possibly engaged to rapper Wiz Khalifa, recently did a radio show interview in Atlanta where the topic of drugs came up. Amber said that her mother and Wiz get along well and smoke pot together. When Amber was asked if she ever partakes, she demurred, saying “I’m a Christian.” While I totally get that some people aren’t into drugs, I don’t really think marijuana comes in the Bible at all. And if she’s such a Christian that she can’t smoke pot, what’s her stance on all those nude or almost-nude photoshoots? And is it okay for her moral code that she is in a relationship with someone who smokes weed, even if she personally is against it? So many questions!