Some People Are Really Hung Up on the ‘Blue Ivy Is Satan’ Thing January 11, 2012 Lilit Marcus 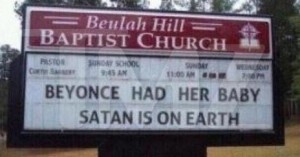 Although most people who read the weirdo conspiracy “Jay-Z and Beyonce‘s baby is the devil” thing the other day laughed it off as absurd, some are refusing to let it go. A church in West End, NC (Note: I’m from NC and had never heard of this place, so I had to look up where it is. It’s near Pinecrest, which basically means it’s not near anything.) has put up this sign claiming that lil’ Blue Ivy Carter is Satan. I’d say they were ripping off the plot of Rosemary’s Baby, but I am pretty sure they’re not allowed to watch that movie.

That said, doesn’t this thing kind of look like it was made by the Church Sign Generator?

January 11, 2012 Katy Perry's Parents Want Her to Date Tim Tebow
Recent Comments
1 Comment | Leave a Comment
Browse Our Archives
get the latest from
New Visions
Sign up for our newsletter
Related posts from Faith Goes Pop 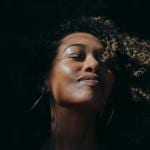 If You’re Not Drowning, You’re a Lifeguard (2020)
I first wrote a story with this title a few years ago,...
view all New Visions blogs
What Are Your Thoughts?leave a comment
Copyright 2008-2020, Patheos. All rights reserved.