Casey Anthony Is Reportedly Getting Baptized 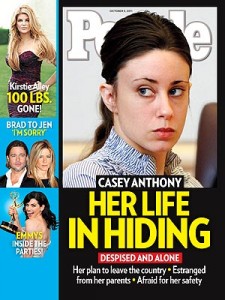 Although she isn’t a singer or actor, Casey Anthony (aka Tot Mom) is definitely a celebrity. The Florida woman garnered headlines around the world when she was tried (and eventually exonerated) on charges that she killed her toddler daughter, Caylee. Now, Radar.com is reporting that Casey – who maintains that she had nothing to do with her daughter’s death – is being baptized so that she can see Caylee again in heaven.

“Casey believes that Caylee is with God now and wants to ensure her own salvation so that she’ll see her daughter again someday,” a source told Radar. There’s no word on what denomination Anthony has become involved with, though. I hope that if this story is true, Casey is getting baptized because she has found meaning in faith, not to combat bad PR or make herself feel better.

What Does It Mean to Be...
Companions on the Journey
Related posts from Faith Goes Pop