See Why You’ll Hate to Love WRECKED by Jeff Goins

I’ll just tell you right up front. I read Wrecked: When a Broken World Slams into your Comfortable Life

by Jeff Goins released just this week by Moody Press.

I didn’t like it. Not one bit. It made me feel uncomfortable. It made me squirm inside. I think I even grimaced when I thought no one was watching.

So I bought ten copies. 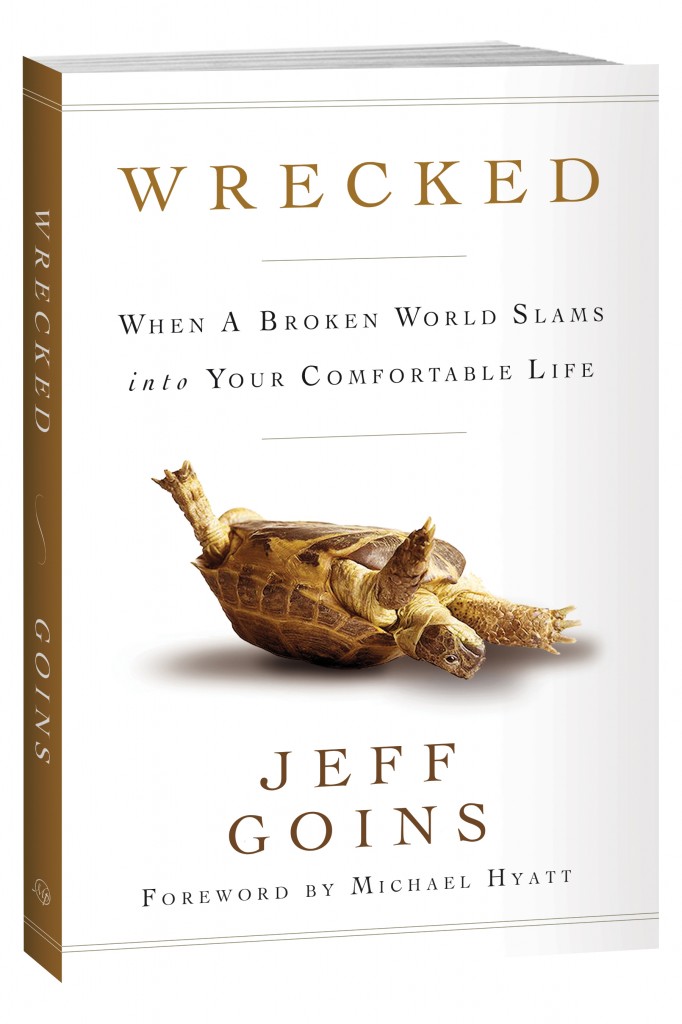 Conflicted might better describe how I feel now that I’ve finished Jeff’s first traditional publishing effort. He’s also published an excellent e-book You Are a Writer (So Start Acting Like One)

that’s gotten more than a few people motivated to chase their dreams.

But Wrecked left me feeling, well — wrecked. I suspect that might have been his goal.

Under the hood of my life

Let’s put it this way. Jeff’s book made me feel as if I were waiting in the lounge at the auto mechanic’s shop. I felt as if he were interrupting my Seinfeld re-run watching by returning every few minutes — wiping his hands on his greasy cover-alls, his faded hat slightly askew atop his reddish hair, with a big grin on his face — to let me know that yet another big-ticket repair would be needed. Worse, each problem seemed more critical than the one before. All I saw were dollar signs as I helplessly nodded to go forward with yet another repair.  Secretly, I was kicking myself for having not checked the oil sooner.

Maybe you’ve been in that lobby of life before. You hate to hear it, your slightly embarrassed that you didn’t see it first, but your grateful someone had the courage to tell you before you found out on the side of a deserted road in the middle of the night. Ya, Wrecked is kind of like that.

From the candid forward by Michael Hyatt to the authentic stories of Jeff’s own journey, I saw myself. I’ve got a few years — and kids — ahead of Jeff now, yet as I read his story, memories of my own wrecked moments flooded back. Those times when a broken world showed itself to me — and I didn’t quite know what to do with it. Like Jeff, sometimes I walked away, pretending it didn’t exist. Other times I engaged far beyond what was wise. And, like Jeff, occasionally I just felt awful that I couldn’t do more. I suspect you’ll have flashbacks of your own as you read.

For my own part, his stories and call took me back to one night a few years ago in a migrant worker camp in Mexico, somewhere in the middle of the Baja peninsula. We had driven on dusty roads up into the mountains for what seemed like forever just to get there. Somehow I volunteered to hand out used clothing items to the men of the camp. I knew a little Spanish, mostly from my experience stateside with migrant workers in the agricultural business. It kind of felt like Christmas. And I was Santa.

Until I offered one man a shirt. He turned it down. Instead, he pointed to my shoes and asked for them instead. Somewhere, deep down, I felt a nudge to give them to him. But it was such an unexpected call — and I only had one pair of shoes for the trip (I told myself) — that I just laughed with him as if he had just told a good joke and offered him a coat instead. He turned it down.

As I read Wrecked, I found myself returning to that moment, realizing that I could have gotten another pair of shoes, or sandals for that matter. I found myself wishing I could find that camp again. Find that worker again. Offer him my shoes. All of them. And tell him I’m sorry for being such a selfish jerk.

Go where it hurts

“Go where the pain is,” Jeff encourages early in the book as he makes the sage point that his generation — and most of Western culture, for that matter — has been taught that happiness will be found in the absence of pain. Not true, says Jeff. Instead, he makes the case that it’s precisely in the midst of pain that we find our ultimate purpose. Tales of ministry from Spain to Mexico to Nashville and beyond frame his call to put feet and hands to those urges to help that most of us suppress.

Yet Jeff ‘s call is not simply to serve sporadically on short-term endeavors, although he argues those can have a critical place in our process of becoming wrecked in the first place.  He argues that there is a place and time for throwing caution to the wind and following that restless call — a season in life, he calls it. Nevertheless, he wisely notes, “It’s easy to lose yourself in the pursuit of justice.” (116)

Being wrecked is about us, but compassion is about others. You can’t stay wrecked forever; you eventually have to move on. Choosing to do something may be the greatest wrecking we experience. (131)

And now for the committment

Yes, there is a place for passionately engaging problems. But Jeff warns that other seasons of life must and should follow. In those subsequent seasons, the urge to be constantly on the go needs to be checked by committments, the fertile soil in which true legacy can flourish. He speaks candidly about committment to his fellow drifters of Generation Y:

The fact that we fear committment is what makes it so great…Certain forms of greatness require committment. (106)

Fulfillment doesn’t come from what you do or where you live. (153)

Our crippling fear of committment is killing us. (108)

Clearly, he doesn’t get lost in the melodramatic navel-gazing so common with some Millenials. Instead, he speaks to his generation as a fresh voice of candor in a way I’ve heard few authors do well. He is, after all, one of them. He clearly gets their restless quest for meaning as well as the intrenched fear of committment that too often paralyzes them into occupying their parent’s basement.

The mess that is me — and you

His direct, enaging style leaves little room to conceal the pain of living in a fallen world.  Nor does Jeff dance around his own failings and fears.  In many ways, I felt as if I were reading the secret diary of a kindred spirit. But I don’t think it’s just me. I suspect you’ll see yourself in Wrecked, as well, because what Jeff is describing is the hidden haunting of every messy soul. He gets real. And so will you.

As I read the last paragraph of Jeff Goins’ book, I found my soul screaming, “No! That can’t be all! — Thank God that’s over! — Why did it have to end? — I hate him for writing this!” I know. Therapy may well be the best option for me. But I suspect Jeff intended this soul-baring book to provoke a different reaction in you: action.

And it begins by picking up a copy here or here. Buy it by Saturday night, August 4, and he’s tossing in more than $150 of free stuff. Seriously. Check it out here.

Wrecked is a riveting weekend read that will not leave your comfortable life intact. You’ve been warned.

Now go. Read Jeff Goins. And change the world by changing yourself.

Have you had a moment in your life that left you feeling wrecked? Share your story with a comment or, if you’ve read Wrecked already, leave your take on the book with a click here.

August 2, 2012
Who Else Wants to Be a Whistleblower in Church?
Next Post

August 3, 2012 Here's a Quick Plan for Great Worship Music in Your Church
Recent Comments
7 Comments | Leave a Comment
"But, isn't that for God to know, whether He accepts it or not? I don't ..."
Angela Nordmeyer Why I’ve Stopped Singing in Your ..."
"what god? you're just making stuff up"
dftysrtysrty How to Be Truly Thankful this ..."
"I do like to read the very real experiences of people and human responses and ..."
calvin smit Why I’ve Stopped Singing in Your ..."
"Genesis 35:19-2 (Jacob/Israel set up the monument for Rachel long before the bondage, exodus, Law, ..."
lynlindberg Was Jesus Born Away in a ..."
Browse Our Archives
Related posts from FaithWalkers