Why I’m Voting for Marco Rubio in Georgia 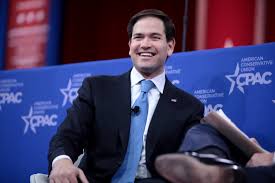 Tomorrow is the first time in my adult life that my primary vote will actually mean something.

Having lived in Ohio for nearly four decades prior to moving to Georgia, the primary season was always all but over by the time the vote got to Ohio (which only moved up in the primary schedule this year).

This year I will cast a vote to help decide the nominee for the Republican party.

And I choose Marco Rubio.

The truth is that I could flip a coin to choose between Ted Cruz and Marco Rubio and be perfectly happy with the outcome.

I think they are two of the finest candidates to appear on a ballot in my lifetime. I initially looked forward to deciding between those two and Governors Rick Perry and Scott Walker. But once the executives dropped out of the race, my choice has never wavered from being between Rubio and Cruz.

For most of the last several months, I have leaned toward Cruz. But after the last debate, I am leaning toward Rubio.

And it just so happens to be the day before the primary in Georgia.

So here are some key strategic reasons, not intended to be exhaustive, why I am voting for Marco Rubio.

Cruz supporters and Rubio supporters need to come to terms with the fact that the two candidates are 98% alike. I like them both.

Only style points separate them. It’s time to stop quibbling about the 2%, and unite around one candidate who can win given the facts on the ground at this stage of the process.

I expect we will have a surprisingly strong performance by Rubio on Super Tuesday across the board.

That doesn’t mean people will wake up fast enough to stop Trump from winning several states, but it does mean that Rubio could unexpectedly claim second on Tuesday.

I agree with Erick Erickson that the third-place candidate—whoever that may be after Tuesday—should step aside and get behind the second-place one for the good of the country.

In Georgia, Rubio has the best chance of winning and stopping Trump. So he gets my vote.

By the way, in tomorrow’s episode of The FaithWalker’s Podcast I share and explain my process for choosing candidates as a Christian.

I don’t talk about any specific candidates, just unpack the process I use as a believer and share it in the hopes that it might be of help to you.

Sign up at FaithWalkers now to get it delivered to your inbox tomorrow morning when it goes live or subscribe on iTunes. 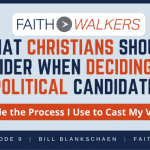 March 1, 2016 [Podcast] What Christians Should Consider When Choosing a Candidate
Recent Comments
0 | Leave a Comment
Browse Our Archives
get the latest from
Evangelical
Sign up for our newsletter
POPULAR AT PATHEOS Evangelical
1

Why Aren't the Other Slavers Getting...
Cranach
Related posts from FaithWalkers