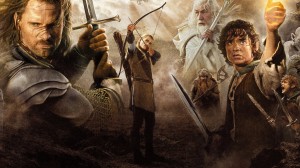 In my house, my wife Katie and I are hoping that using consistent, relaxing music around bedtime will help to create a sleepy routine for our seven-month-old daughter. You may be surprised to learn that current music of choice is a playlist of peaceful tracks from Peter Jackson’s Lord of the Rings films. No, we don’t think little Teresa is learning anything from “Into the West.”  (Our parental delusions aren’t that acute.)  But as I listen to the music and recall the stories told by Tolkien, I’m reminded of why I want epic stories and adventures to be an essential part of our children’s upbringing.

Contemporary life in the West—our West—is marked by the neutering of moral conflict.  We hide challenging moral analysis behind façades such as non-judgmentalism and liberal neutrality.  The assumed progressive historiography under which we all labor informs us that high stakes moral conflicts within the self, within our society, and among the nations are (with the exception of the moral imperatives associated with certain aspects of sexual liberation) secluded to a benighted past.  And when moral conflicts reveal themselves—organic or conventional radicchio?—what is at stake is social standing, not the eternal soul.

To borrow from Chesterton, Tolkien’s epics are in this regard more real that the lived reality of the secular, postmodern, neoliberal, insert-pejorative-modifier West.  They present through fantastical narrative the high stakes moral conflicts that we should want to seek out, not to shirk.  The journey of the soul is fraught with challenges; great epics are honest about their difficulty and affirming of our ability to overcome them, urging us to live boldly.

I want our children to be steeped in this epic mentality.  They can learn about the niceness of sharing from Caillou—but Frodo teaches the prior lesson: the difficulty and the importance of choosing right over wrong.  Too many young people know how to be nice, but not why; they know how to be bourgeois, but not how to be good.

Now, as a man, my first inclination when considering this is to think about the sons with whom my wife and I may someday be blessed.  Manly virtues, etc., etc.  But it’s at least as important—and probably more so—to teach this epic mentality to girls.

In a post at Super Flumina about “masculine” friendship, Audrey Schaengold introduced me to the notion of “metabolic” concerns—that is to say, the important quotidian tasks and preoccupations that keep life going but which are not in any real sense enduring—and how our culture still tends to identity “femininity” with these concerns.  To introduce high stakes epics to boys with more passion than to girls reinforces the idea that physical and moral heroism is an essentially masculine capacity—best for the ladies not to worry about such heavy concerns.

But if the epic mentality is the antidote to antiseptic postmodernity, then it is so for both sexes.  If the epic mentality teaches us to live boldly, to focus on our boys suggests that girls’ lives aren’t supposed to be terribly interesting.  If the epic mentality fosters a proper reverence for the high stakes moral conflicts upon which the health of the eternal soul depends, we cannot in conscience withhold from our girls what we give to our boys.

And so someday Katie and I will read Tolkien to Teresa with as much enthusiasm as if she were Thomas.  God-willing, she will be as enchanted by Middle Earth as her parents.

March 4, 2014
The Liberal Arts and the Call to Die
Next Post

March 7, 2014 Religious Experience as an Assault on Autonomy
Recent Comments
0 | Leave a Comment
Browse Our Archives
get the latest from
Evangelical
Sign up for our newsletter
POPULAR AT PATHEOS Evangelical
1