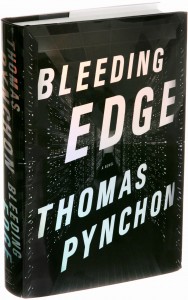 Is it better to seek the truth, or to accept the comfort of illusion? That is one of the central questions posed by Bleeding Edge, the latest novel from Thomas Pynchon that paints a picture of greed, ambition, and paranoia in wake of the rise and fall of the dot-com era and 9/11.

Steeped in pop-culture references to Beanie Babies, Friends, and Britney Spears, the book captures the enthusiasm and recklessness of the dot-com bubble as well as the panic, uncertainty, and despair of the subsequent crash. September 11 is likewise portrayed evocatively—the panic of trying to locate loved ones on the day of the attacks, followed by the confusion and chaos of the aftermath and the rampant corruption of the unscrupulous.

The plot of Bleeding Edge, like any story of conspiracy-theoretical speculation, is almost beside the point. Pynchon’s strength lies in creating an atmosphere heavy with conspiracy and cynicism. The characters and situations he creates are often surreal and bizarre, yet drawn with so much detail that they seem almost believable.

Maxine Turnow—a quintessential Jewish mother and somewhat reluctant divorcée—is a decertified fraud examiner who now operates a rogue agency called Tail ‘Em and Nail ‘Em (her original plan to add Jail ‘Em seemed too optimistic). Her line of work brings her into contact with the expected host of seedy underworld characters on a regular basis. Reg, a paranoid filmmaker friend of Maxine’s, opens the wrong doors at hashlingerz, the computer-security firm he’s been hired to shoot. Worried he’s stumbled into dangerous territory while trying to get footage for his documentary, he begs her to look into the company. Her investigation quickly takes a turn for the sinister and surreal as Pynchon drags the reader through Maxine’s madcap, hardboiled chase through the underworld of New York’s Silicon Alley.

Along the way, she encounters many strange characters, including a pair of rapping Russian mobsters named Misha and Grisha; Gabriel Ice, the sinister and ruthless CEO of hashlingerz; Ice’s estranged mother-in-law March, an activist and conspiracy-theory enthusiast who runs a popular and cutting-edge weblog; a programming whiz whose life goal is to emulate Jennifer Aniston; and a professional “nose” who smells things for a living and is obsessed with pinpointing Hitler’s choice of cologne.

As Maxine’s investigation continues and the year passes, the action eventually extends into early September—when two planes hit the World Trade Center. Although the story begins in the spring of 2001, it’s easy for the reader nearly to forget what must inevitably occur in a book set in New York City during that year. Pynchon’s genius for constructing complex conspiracies comes into play as Maxine discovers some odd coincidences leading up to the attacks, including stock-market shenanigans and footage of something that looks to be a practice run for covert paramilitary action.

Maxine uncovers evidence that various parties were involved—hashlingerz, the CIA, Middle Eastern interests, the Russian mob, and Mossad, just to name a few. The conspiracies are multilayered and numerous, and it’s impossible to lift the veils of secrecy and paranoia to find the truth. In the end, though, the truth doesn’t really matter for the country at large, which is (mostly) happy to accept the narrative of patriotism and heroism in the face of anti-American hatred. Those who do know the truth—or at least parts of it—retreat into their own worlds of possibly paranoid fear of the danger of knowing too much. March Kelleher, who has posted incriminating footage on her blog, becomes elusive, since “the attention from cops and cop affiliates public and private has reached alarming levels, obliging her to roll up her futon every morning, hop on a bicycle, and relocate someplace new, trying not to sleep in the same place too many nights in a row.” Getting in too deep, Maxine realizes, makes it hard to come back to reality; March has become mired in the web of the conspiracy theories she’s become invested in.

As if the confusion of 9/11 and its attendant conspiracies weren’t enough, the reader is also drawn into a further pseudoreality in the form of a computer program called DeepArcher. Hidden from search engines in the bowels of Deep Web, DeepArcher is a realistic virtual world that allows the user’s avatar to explore a seemingly endless series of landscapes while interacting with other users and characters.

DeepArcher is much more than a game—it’s “a journey,” according to its creators. For Maxine, moving her avatar through the landscapes of DeepArcher is an intoxicating and enthralling experience: “A framed lucid dream, it approaches, and wraps Maxine, and strangely without panic she submits.” There is no apparent goal or endgame designed into the program; it encourages submersion and exploration. Escape from the virtual world is difficult because the program eliminates the ability to backtrack, and the pseudoreality is so hypnotic. Before she knows it, hours have passed. Hidden in the Deep Web, it’s a whole world unto itself, and one that Maxine is reluctant to leave. The computer-generated reality is not only utterly mesmerizing, but also incredibly sophisticated and innovative; more than cutting edge, it’s bleeding edge, with “no proven use, high risk, something only early-adoption addicts feel comfortable with.” As one of the program’s creators explains, “[It’s] better to stay deep… After a while it can be an addiction. There’s a hacker saying—once you’ve gone Deep, never get back to sleep.”

In a world like this, what is real? Pynchon invites the reader to question where one reality ends and another begins. DeepArcher is at first glance no more than a computer program. Yet it is also a place where the user can retreat from one world into another that’s constructed and programmed piece by piece by hackers all over the world, each adding their own components. That terrible night after the World Trade Center attack, Maxine dreams she is a mouse caught in a trap, and she “wants desperately to wake up. And once she’s awake to be someplace else, even a meretricious geeks’ paradise like DeepArcher.” When the world is so precarious—9/11, the bursting tech bubble, personal turmoil—escape is appealing.

Pynchon suggests that most people find it easier to build up walls of illusion for themselves (or accept those created by others) rather than confront uncomfortable or dangerous truths. Once a person, a group, or an entire society crosses that line, there’s little chance of return from the mesmerizing enchantment of false reality. In Bleeding Edge, Maxine’s investigation is ultimately futile, although she discovers many leads and clues that point in various directions. The truth is so deeply buried in complicated webs of deceptions, misdirections, and illusions that not even those involved in the conspiracies know the full story.

Life in the world Pynchon depicts is like the DeepArcher program: a meandering journey through a dazzlingly complex landscape where there is no certain purpose or goal and which has only a tenuous connection to the real and the true. Like Maxine in her first DeepArcher experience, it’s dangerously easy for any of us to lose sight of reality and get drawn further and further into illusions—especially when those pseudorealities are more comforting and convenient than facing the reality of a world full of uncertainties and uncomfortable truths. 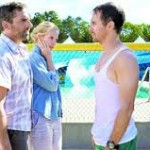 May 20, 2014 Grace at the Movies
Recent Comments
0 | Leave a Comment
Browse Our Archives
Related posts from Fare Forward 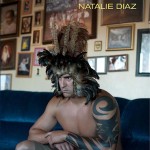