“12 Years a Slave,” An Eternity for Women

“Sin. There is no sin. A man does what he wishes with his property.”

The whip hisses and pops, tearing open the flesh of a slight-framed, barely pubescent slave girl. Stripped naked and hog-tied to the whipping post, terror and resignation cohabit her face.

Patsey once sat humming naively in the fields, fashioning dolls from the others’ discarded corn husks, a deranged benefit of Master Edwin Epps’ alternative use of her body. Her innocence is not just his property, but his gift: “God given her to me.”

Now she is so tightly bound, she can’t even writhe against the lashes. She can only tilt her face upward in agony toward the harsh spotlight of sun, pleading with whatever is or is not beyond the blue Louisiana sky.

Epps absolves himself: “There is no sin.” But for this moment it is not Epps who is thrashing her.

It is the hero of the story.

Years before, Solomon Northup was a free man. The film 12 Years a Slave is based on his memoir, published in 1853 shortly after his return to freedom and family in Saratoga, NY. Drugged and sold into the slave trade in Washington, D.C., we are snapped with him into a harrowing captive journey. 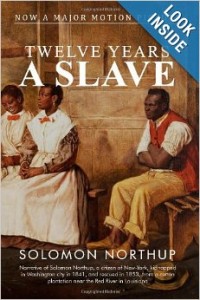 With religious fervor, traders and owners strip Northup of the ‘sins’ of his autonomy, talent, intellect, and sense of self.

While holding Bibles, quoting scripture, and preaching sermons, twisted masters do not just abuse their hostages, they confuse their moral compass. Hence we witness Northup save himself by bludgeoning Patsey to unconsciousness.

It would have been more moral to finish her off.

Shortly before, Patsey approaches Northup in the night. She is the walking dead; she begs him to tie rocks to her and sink her in the river. Considering Northup’s future, she assures him God forgives merciful acts.

But Northup harshly reprimands her: “How can you fall into such despair?” He dismisses that she does not have a family living somewhere free, no free papers that can be produced, no benefit of being educated and male, all elements he uses to escape.

Northup has reason for hope. But he is cruelly ignorant to Patsey’s female plight: the added mental, physical and spiritual torture of sexual servitude, how the violation of rape above all else snuffs the female soul.

Epps’ resentful and equally helpless wife curses and beats her too. Yet Northup chastises her vulnerability to gird his own aspiration, foreshadowing the coming physical cut-down.

Just before this desperate plea, we see one of probably hundreds of rapes Patsey endures. Epps slinks onto her silently like a predator. When he finishes he slaps her face hard, lifts himself off of her and leaves her there, her white cotton dress still pushed up on her chest. She lies still, trying to catch her breath.

Her later whipping is ironic atonement for Epps’ righteous anger, she the Jerusalem to his Yahweh. Epps is a jealous God; the neighboring plantation owner is partaking of what is his, something Patsey has no more power to resist than an ancient nomad desperate for food and shelter.

He condemns her to suffer, tied to a tree. Sons of God may be mercilessly broken. But the women bear the special fury of ‘sinless’ sins, corpses hanging on the crosses of men.

A while later, Epps is coddling a black child, and Patsey, severely bruised and cut, is hard at work in the yard.

In a recent review published globally, Associated Press writer Jake Coyle describes Epps as “torn by his love for his most prized cotton-picker.” That a well-educated American man can watch the film and call what Epps does to Patsey “love” is beyond disturbing.

In the same way biblical scripture (like I’ve hyperlinked throughout) irresponsibly personifies Israel as a harlot who deserves violent repercussions from God, the subjugation of women is perpetuated in nuance so common we may hardly recognize it as systemic power. The stories are sanctioned, after all, by the ones who write the book.

Epps did not love Patsey; he consumed her. He lusted and wielded his power over her, used her, made her inhuman, made her want to die. If God is love and this is her experience of love, how does a woman believe, where does she find the hope Northup admonishes?

The persevering problem of this common misinterpretation of patriarchal intention is dangerous. On the International Day of the Girl, Mulala Yousafzi toured America illustrating how the autonomy, talent, intellect, and sense of self is still being stripped from females at the bottom of the hierarchy.

When Northup is rescued by officials — a deal struck in a man-to-man moment with a migrant Canadian worker — Patsey screams, chasing the buggy. He watches her grow smaller as he speeds toward salvation. She faints, falling to the ground as her savior denies her a third time.

In every review, Northup is a hero, brave in his refusal to give up.

But Northup also unwittingly provides a rare glimpse of cruel truth about women and slavery. It can wake us not only to our evil history, but to the estimated 20 to 30 million people still in slavery in the U.S. and around the world, a system trafficking an estimated 800,000 across international borders; half children and over 70% female.

In the end, when Northup finally lays eyes on his family, there is no breathless rush to cling to one another. There is an awkward pause, a far-off look in his eyes. I like to imagine he is back in the plantation yard turning a baby girl who bared her soul to him to bloody pulp, hearing her wail as he is whisked away.

“Forgive me,” he whispers, gazing at his wife and daughter. “I apologize for my appearance.”

I imagine he is seeking a redemption aside from his return to freedom. Despite that he too was abused, I imagine he asks forgiveness from Patsey — for himself and for mankind — searching for it in the eyes of the women who are still breathing, those yet to be born. That is what makes him a hero.

May the world one day do likewise.

——————–
I highly recommend seeing this phenomenal film directed by Steve McQueen and written by John Ridley. It should be required viewing for every citizen of the United States. It opens to limited release October 18.

August 13, 2013
Chix 6: A Broadway-Bound Game-Changer for the Girls
Next Post

Will The Church Survive The Covid-19...
The Thoughtful Pastor
Related posts from Femmevangelical