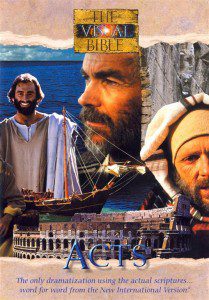 There have been many films about the life of Jesus, and a handful of high-profile movies from The Sign of the Cross to Quo Vadis? have detailed the persecution of Christians in Rome some 35 years later. But the dramatic transition Christianity made between those two points — from a marginal Jewish sect to a thriving, if persecuted, community in the seat of Gentile power — has received scant attention even from Christian filmmakers.

Into this void steps Acts, the second film from The Visual Bible. (The first was Matthew.) Like the aborted Genesis Project of the 1970s, the minds behind this South African venture hope to film the entire Bible, using the New International Version as their script. Says the press kit in bold, coloured letters: “No scriptwriter’s liberties. No interpretations. No dramatic license.”

This, of course, is not quite true. All performances are, by definition, interpretations, and this is doubly true for films, which determine how we see the actors and their work. Every camera angle, every dissolve, every cut is an interpretation of some sort. And, in any case, Acts does take some licenses, most obviously in the prologue which introduces Luke (Dean Jones) and the shipbound patients to whom he tells his story.

But once the story begins, Acts stays very true to its text indeed — so true, in fact, that Luke interrupts with a “he said” or a “she asked” every time someone speaks! It’s a risky approach, especially for a book of Greek history that, typically, alternates between pithy summaries and long speeches.

Moreover, Acts bristles with references to a wider social and historical context that needs explaining for a modern audience: it’s one thing to know that Paul took a vow and shaved his head, but if we don’t know what that means, what do we learn from seeing it acted out? On the other hand, for those who tend to miss such fleeting passages, seeing them visualized does work as a sort of memory aid.

In that sense, Acts is a nifty resource for Sunday schools and home Bible studies. But even so, I question its interpretive value. For a film that emphasizes joy and smiles — sometimes ridiculously so, as when Luke chuckles over the “sharp dispute” concerning circumcision, which was a bitterly divisive issue in the early church — it is strange to hear Peter’s “we’re not drunk!” retort (Acts 2:15) sound so flat. Director Reghardt Ven dan Bergh is so busy tucking giggles into the more serious scenes, he tends to miss the humour that is already there. 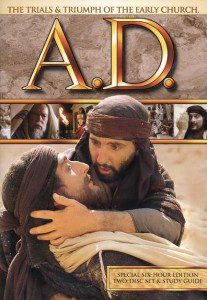 These shortcomings are remedied somewhat in A.D., a star-studded mini-series written by Vincenzo Labella and Anthony Burgess, the team behind Jesus of Nazareth. If Acts lacks a social context, A.D. has it in spades: the original 12-hour show wove a rich tapestry from the Book of Acts, the scandalous affairs of the Caesars, and a fictitious storyline that explored aspects of first-century Jewish, Greek and Roman culture. A.D. does not simply show that Christianity spread, it aims to show why.

This synthesis works most brilliantly when Caligula orders a statue of himself placed in the Jerusalem temple. Not implausibly, A.D. plops this incident right in the middle of the church’s first debates over Gentile membership — Cornelius (Paul Freeman) even becomes one of the officials who must carry out Caligula’s decree! This dilemma brings the foolishness of Roman idolatry into sharp relief even as it forces Jewish Christians to question what they mean when they say it is their hearts, and not a building of stone, that is the Lord’s true temple.

Unfortunately, this episode also highlights the clumsy editing which cuts the video edition down to six hours: we see Romans plot Caligula’s assassination, and we see Jews celebrate afterwards, but the deed itself is left out. So, too, are most of the Caesars’ affairs, leaving us a decent church history that segues into an unconvincing soap opera of Roman soldiers, Jewish slaves, and gladiators in love.

Even worse, the fictitious characters speak in tones so pretentious Charlton Heston would blush. “I’m not Rome!” cries one soldier, but the script betrays him: he, like the others, is not a character but a symbol, and a dull one at that.

Still, the earlier scenes, beginning with Jesus on the road to Emmaus, are among the best of any Bible adaptation, and they are all the more valuable for their unique subject matter. Thomas (Davyd Harries) makes a droll foil for some of the more earnest histrionics, and the verve with which Peter (Denis Quilley) performs healings and delivers his passionate speeches puts The Visual Bible to shame.

A.D.’s religious scenes do have one major flaw: they tend to water down the gospel, particularly near the end, when the apostles talk a great deal about love but not very much about Jesus Christ. While A.D. makes great use of the relationship between Paul and his tutor Gamaliel to explore the tensions within early Judaism, Paul almost vanishes from the story once he becomes a Christian. And what we do see of him bears little resemblnce to the fiery-tempered evangelist we find in the epistles. 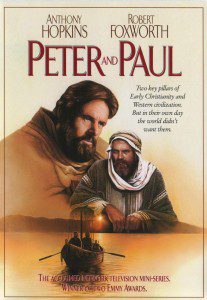 For that, we must turn to Peter and Paul, a 1981 TV-movie recently reissued on video, and the unusually thorough use it makes of Paul’s letters. Some of Paul’s speeches are taken word-for-word from his own writings, and this is the only film of the three to make any use whatsoever of the autobiographical information in Galatians.

That the film is a success is largely due to the wild, impassioned performance of Anthony Hopkins as Paul. It is not too difficult to see how his zeal could win converts around the empire and drive away former mentors such as Peter and Barnabas. Even in casual conversation, Hopkins captures something of Paul’s easily distracted and tangent-prone nature. His is the classiest performance of them all.

The same can’t be said for Robert Foxworth who, as Peter, seems to exist on a very short fuse. It’s not entirely his fault: Peter and Paul ignores most of Peter’s ministry and paints an extremely morbid picture of the church before Paul, which seems to consist of a few dozen people hiding in Jerusalem and bickering incessantly.

Where are the thousands of converts? Where are the churches planted in Samaria, Joppa, even Ethiopia? To see Peter and Paul, you might think Peter did nothing but argue with James and, whenever he got tired of that, retreated to Galilee for a little fishing.

Peter and Paul is even less successful when it tries to deal with the larger social context — it doesn’t help that Raymond Burr, as Herod Agrippa, looks rather silly in his purple toga — but such moments are few. Most of the actors are quite good, particularly John Rhys-Davis as Silas and The Pink Panther’s Herbert Lom as Barnabas, and the careful attention this film pays to the New Testament as a whole makes it the cream of the crop.

Peter Chattaway is a student at the University of British Columbia and entertainment editor of the campus newspaper, The Ubyssey.

March 26, 1997 The Leon King
Recent Comments
1 Comment | Leave a Comment
"Not yet, but I might do something like that once Season 2 is complete."
Peter T Chattaway The Chosen — season one scripture ..."
"Is there a PDF or printable version of this extensive list? I would love to ..."
Liza The Chosen — season one scripture ..."
"What a strange article. Using movies as your basis to defend that Lazarus was murdered ..."
Mark Ross DeFazio The death, resurrection, and second death ..."
"Another with Ethiopian eunuch and Philip https://archive.org/details..."
Jason McKahan Watch: Philip is the original vanishing ..."
Browse Our Archives
get the latest from
FilmChat
Sign up for our newsletter
POPULAR AT PATHEOS Entertainment
1