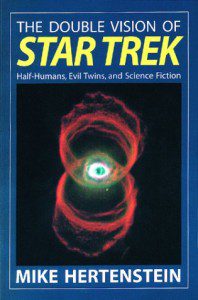 FOR A SHOW rooted so strongly in secular humanism, Star Trek has quite the Christian following. Theologian Stan Grenz has lectured on the TV series at Regent College, and Phil Farrand, author of the fannish Nitpicker’s Guide series, openly acknowledges his love for Jesus.

Now that books on the physics, metaphysics, biology and meaning of Star Trek have become a literary genre in their own right, the time is more than ripe for an analysis of this phenomenon from a Christian perspective.

Mike Hertenstein’s The Double Vision of Star Trek does an admirable, if by no means exhaustive, job of meeting that need, tackling the show from literary, political, moral and philosophical points of view.

According to Hertenstein, editor of Cornerstone magazine and co-author of Selling Satan: The Tragic History of Mike Warnke, the show is "a bundle of unresolved tensions" and it suffers from "a chronic guilty conscience" because it cannot reconcile those tensions without "cheating."

The show does have a fascinating habit of contradicting itself. For example:

• Trek espouses a humanistic philosophy celebrating the triumph of the human spirit. Yet the day is often saved not by human decisions or spiritual feats but, rather, by last-minute bursts of technobabble — what Hertenstein calls the show’s central deus ex machina.

• In Star Trek II: The Wrath of Khan, Spock sacrifices his life and saves the ship because, he says, the needs of the many must logically outweigh the needs of the one. But in the next film, Spock’s friends reverse, and perhaps betray, that logic, sacrificing their own careers voluntarily to help bring him back to life.

• In ‘The Cage,’ the original series’ first pilot episode, Captain Pike stubbornly resists a world of illusion, as pleasant as it may be, in favor of reality. But in ‘The Menagerie,’ a two-part episode built around that pilot, Pike — rendered speechless and immobile by an accident — changes his mind and chooses the ‘unreal’ life instead.

• The good guys champion cultural tolerance in the extreme — most famously in the Vulcan motto ‘Infinite Diversity in Infinite Combinations’ — but they don’t seem to approve of tyrants, Klingon ritual murder and the like. Apparently, even infinity has its limits.

• Trek characters who transfer their minds into computers or androids inevitably commit suicide or lose the spark of life that defines their humanity. Yet the android Data and the holographic doctor on Star Trek: Voyager are accepted by most characters as fully conscious persons, even humans, in their own right.

• Trek history was once built on the solidly humanistic premise that human beings learned to achieve peace and harmony on their own, sometime between now and the 23rd century. But the film Star Trek: First Contact undermines that premise by revealing that the world was essentially saved by the arrival of ‘alien messiahs’ in our near future.

Hertenstein plumbs these and other conundrums, such as the Federation’s unexplained political unity and the increased presence of overt religious themes on the series since its strenuously anti-religious creator, Gene Roddenberry, died in 1991. Hertenstein, taking his cue from the likes of C.S. Lewis and J.R.R. Tolkien, also sees subliminal traces of the gospel in Star Trek, most notably in the recurring theme of self-sacrifice.

Many of these issues are explored anew — and complicated further — in the new film Star Trek: Insurrection, in which Captain Picard and his crew rebel against the Federation to protect a paradisaical planet. Those wishing to explore these themes in further depth should give Hertenstein’s book a look.

January 3, 1999
Moses movies have their own history
Next Post

January 5, 1999 Review: Central Station (dir. Walter Salles, 1998)
Recent Comments
0 | Leave a Comment
Browse Our Archives
get the latest from
FilmChat
Sign up for our newsletter
POPULAR AT PATHEOS Entertainment
1 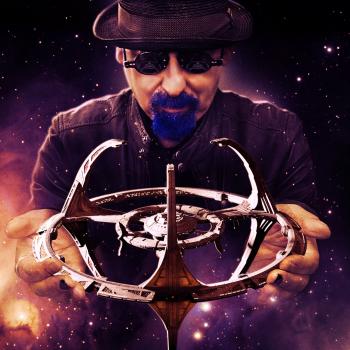