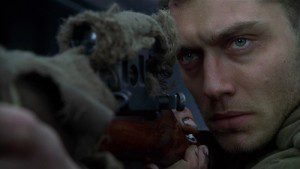 These days, war movies waste no time plunging the viewer into the miserable, savage, bloody midst of combat, and Enemy at the Gates is no exception. The grime splashed on the lens, the stark and chaotic cinematography, the way the sounds of battle are toned down so we can take in the sorrowful music and pause to wonder why people do these things to each other — all the tricks that seemed so innovative in Saving Private Ryan and Gladiator are by now a familiar part of our film grammar, and they are all present and accounted for in Enemy at the Gates.

The film, written and directed by Jean-Jacques Annaud (Seven Years in Tibet) and based on the true story of Soviet sniper Vassili Zaitsev and his patient, prolonged duel with a Nazi adversary, follows a predictable pattern in other ways too, but for once, this is not a serious drawback. At a time when star-driven vehicles like The Mexican and 15 Minutes pretend to break the mould, and end up just wasting our time, it’s a genuine relief to find a film with a straightforward premise and just enough personality to make it work.

In this film, the opening battle takes place in Stalingrad, where hundreds of thousands of Germans and Russians have been sent to the front lines like so much cannon fodder in a conflict that, we are told, will determine the fate of the world. The Russian officers in particular are so desperate to defend the city named for their dictator that they shoot any of their own men who try to run away. In the midst of all this, one officer, Danilov (Joseph Fiennes), proposes that they try a more positive approach, and raise up heroes that can inspire the people. And Danilov has just the hero in mind. He has seen Zaitsev (Jude Law) in action, and he knows that, with the help of the Russian propaganda machine, he can transform this sharp-shooting shepherd from the Urals into a Soviet celebrity. Danilov is even more delighted when Zaitsev proves to be such a nuisance to the Nazis that they send in Major Konig (Ed Harris), their best sniper and a nobleman to boot, to hunt him down. “It is the essence of class struggle!” says Danilov, eager to exploit this for its symbolic value.

Zaitsev himself, however, has little use for politics; mostly, he just wants to fight for the motherland, and as a sniper, he does not have to suffer on the front lines like a common grunt. He also falls in love with Tania (Rachel Weisz), an educated Jewish woman who works with Danilov at the army headquarters but wants to join the fight against the Germans in a more direct manner. Law and Weisz have a fine chemistry, and the courtship between their characters is just romantic enough, and erotic enough, to work. Alas, Danilov is also in love with Tania, and he begins to let his jealousy obscure his obligation to his country.

Thankfully, the actors are able to hold this story together despite some fairly big gaps in the script. The story has a way of lurching ahead without explaining how, for example, a Russian boy who befriended Zaitsev gets to know Major Konig and become an informant for him. It’s also sometimes fairly easy to figure out who’s going to die, since Zaitsev is frequently accompanied by fellow snipers who serve the same task here that expendable crewmembers serve on Star Trek; the Nazi sniper has to hit somebody.

Still, Annaud is able to milk some genuine suspense out of this cat-and-mouse game (actually, it’s more of a cat-and-cat game), in which the expert marksmen, hiding among the dead bodies and broken furniture of long-abandoned buildings, are compelled to remain absolutely still even as, say, bombers fly by, dropping massive explosives on the city.

And, in a rare twist, the protagonists — the people on “our” side — are almost all played by British actors, while the only German with any significant screen time is played by an American. This gives the film a more interesting political subtext than it might have otherwise had; it also gives us the amusing sight of Bob Hoskins suppressing his Cockney accent so he can pass for Nikita Khrushchev.

March 16, 2001 Review: Memento (dir. Christopher Nolan, 2000)
Recent Comments
0 | Leave a Comment
Browse Our Archives
get the latest from
FilmChat
Sign up for our newsletter
POPULAR AT PATHEOS Entertainment
1 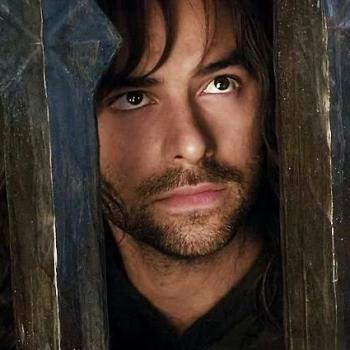 Entertainment
Risen on Blu-Ray: some quick notes on the...
FilmChat