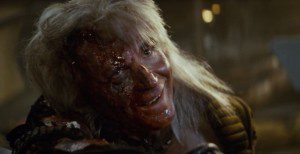 I recently made mp3s of a few James Horner tunes so people could compare and contrast his soundtracks to Star Trek II: The Wrath of Khan (1982) and Aliens (1986) — they’re very similar. As a result, I have had the ‘Genesis Countdown’ tune running through my head a fair bit lately, and today, during a moment of boredom, I found myself thinking about the climax to this film, and what makes it so interesting and distinctive.

There is a cliché that runs through many, many, many movies in which the hero defeats the villain, and then, just when you think everything’s safe, the villain rises up again and lunges at the hero, only to be destroyed immediately by the hero or one of the hero’s friends. The first examples of this sort of thing that come to my mind are in Scream, Red Dragon and Fatal Attraction. Even Aliens plugs into this cliché, sort of — instead of an alien lying on the floor, presumably dead, and then suddenly jumping up and lunging at our heroes, the film shows the aliens’ lair being destroyed in a nuclear explosion, and then settles into a lull as our heroes return to their spaceship, safe and sound … and then, suddenly, oh no! the tranquility is shattered when one of them is ripped in two by the Queen Alien, who snuck onto the ship as a stowaway on the heroes’ shuttle! This shocking discovery is then followed by a fairly extensive one-to-one battle between the Queen Alien and Sigourney Weaver. In this regard, Aliens is quite different from the typical film, where the villain is killed as soon as he or she jumps up. But the basic paradigm is still there — the villain is presumed dead, is then shockingly discovered to be alive, and is then really put to death.

ST2:TWOK is quite different. Yes, on one level, it presents a defeated villain who makes one last stab at killing our heroes. But he does this in a rather unique way, and the heroes survive in a rather unique way. Instead of the villain directing all his energy at the hero, and instead of the hero shooting back — that is, instead of a villain and a hero who both seek victory by trying to destroy the other — ST2:TWOK presents a hero and a villain who both seek victory by destroying themselves.

The moment when the villain first seems to be defeated takes place inside the Mutara Nebula, where Kirk’s ship has been badly damaged but has managed to do even more damage to Khan’s ship. At this point, Khan seems to be the only one left alive on his ship — he is, at any rate, the only person conscious on the bridge, and he is badly wounded. Kirk, rather than go in for the kill (and who could blame him if he wanted to? — this is not a regular war, where soldiers are relatively innocent tools of their states and Geneva Code-type rules apply, but a personal war that Khan launched against Kirk without any warning whatsoever, a personal battle that has claimed the lives of many of Kirk’s young crew), tells his crew to prepare to help the survivors that may be on that ship.

And then Khan activates the Genesis device. In just a few minutes, the entire Mutara Nebula, and everything within it, will be destroyed. Khan, rather than face the shame of defeat, rather than protect his own crew, rather than put the needs of his many against the needs of himself, decides to go out in a blaze of glory. He will destroy himself and take Kirk with him, along with all the other friends and foes who might stand in his way. And killing Khan won’t stop him from doing what he wants — he has already accepted death and decided to make the most of it.

How is Khan thwarted in the end? Spock, too, recognizes what needs to be done — the Enterprise’s engines need to be repaired so it can escape from the Nebula, but repairing the engines means entering a section of the engineering room filled with lethal radiation — and he rushes to do it, knowing that he will die. Spock, too, has accepted death and decided to make the most of it. But whereas Khan’s final act is a cataclysmic extension of his ego, an act of massive destruction that ripples out and consumes everyone in its path, Spock’s final act is almost an act of humility — he draws as much of the destruction as possible onto himself, in order to spare the lives of as many other people as possible.

Some of this is obvious from watching the film, and I have discussed this movie with lots of friends over the years, but it was only today that I thought to compare the climax to ST2:TWOK to all those other films where villains are not defeated as easily as we might expect them to be. I think this is yet one more reason why I really, really like this film.

(Side note, though I may have said it here before: I have always liked the fact that ST2:TWOK never lets us know whether Khan knew that his final effort to kill Kirk had failed in the end. The very last time we see Khan, he is spitting hateful quotes from classic literature in Kirk’s direction, and that’s it; in Vonda McIntyre’s novelization, Khan actually dies of his wounds before Kirk escapes — so he dies thinking he won. I much prefer the film’s ambiguity on this point to the sort of thing we see in all too many movies, where we get a good look at the villain’s face, usually just before he dies, when he realizes he has failed; I’m thinking especially of a shot near the end of Spider-Man, here. Too many films try to satisfy our need to shame or humiliate the villain, but ST2:TWOK avoids this gimmick — which is one more reason I love it so.)

— A version of this post was first posted to the OnFilm discussion group.

December 14, 2002Star Trek: Nemesis (no spoilers, just a lot of grousing)
Recent Comments
0 | Leave a Comment
""AD" stands for "Anno Domini", a Latin expression meaning "In the Year of Our Lord".So ..."
Peter T Chattaway The Chosen — season one, episode ..."
"Why does it say at the start of episode 3 that it takes place 26 ..."
Desiree Chamberlain The Chosen — season one, episode ..."
"What about Hellboy, The Grudge, Ghoulies, and Anaconda?"
45th Spiderbob Group VGCP When R-rated franchises go PG-13 …
"Not yet, but I might do something like that once Season 2 is complete."
Peter T Chattaway The Chosen — season one scripture ..."
Browse Our Archives
get the latest from
FilmChat
Sign up for our newsletter
POPULAR AT PATHEOS Entertainment
1

Thor and Redemption
Superhero movies tend to come with ready-to-order religious applicability. Stories with supremely...
view all Entertainment blogs
What Are Your Thoughts?leave a comment
Copyright 2008-2021, Patheos. All rights reserved.