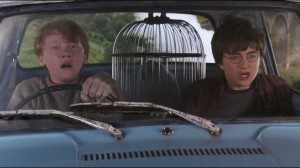 Harry Potter and his friends may soar through the air on broomsticks and dangle from flying cars in Harry Potter and the Chamber of Secrets, the latest chapter in J.K. Rowling’s ongoing saga about a young orphan at a boarding school for witches and wizards, but the film never takes flight the way it ought to. Despite the abundance of special effects that flood nearly every frame, director Chris Columbus and screenwriter Steve Kloves have their feet planted firmly on the ground, and they bring the same pedestrian sensibility to this story that they brought to the first installment. Instead of making great cinema or great drama out of Rowling’s book, they faithfully cram as many of the book’s plot twists as possible into their two-and-a-half-hour running time. In doing so, they unintentionally sacrifice much of the story’s personality and charm.

Unlike the first film, which had to set up the entire wizarding world from scratch as well as tell an intriguing tale in its own right, The Chamber of Secrets can devote all its energies to telling the mystery story-and so it does. But it’s precisely because the film assumes our familiarity with Hogwarts School of Witchcraft and Wizardry and its colourful inhabitants that it loses some of the magic of the earlier film; in a word, the sense of discovery is gone. Still, there are a few moments when a sense of wonder does peek through and the characters do come alive, especially near the beginning when Harry (Daniel Radcliffe) visits the home of his friend Ron Weasley (Rupert Grint) and sees for the first time how everyday wizards live-the dishes wash themselves, and so forth. Harry’s awe is amusingly reciprocated by that of Ron’s father (Mark Williams), who is intrigued by the world of “muggles,” or non-magical people. At one point, knowing that Harry has lived with muggles all his life, Mr. Weasley asks intently, “What exactly is the function of a rubber duck?”

The film introduces a few new characters, beginning with Dobby (voice of Toby Jones), a “house elf,” or domestic slave, whose computer-generated antics are mildly funny. (Dobby bangs his head on things as a form of self-punishment whenever he speaks ill of his unidentified master-and he tends to do this loudly, when Harry most desperately needs him to be quiet.) Dobby tells Harry that great danger awaits him at Hogwarts, and he tries to prevent Harry from going back-but of course, Harry, who’s startled to learn that a slave class exists in the wizarding world, disregards Dobby’s advice and makes his way to Diagon Alley in time to buy some school supplies.

There, Harry crosses paths with Lucius Malfoy (Jason Isaacs, who mastered the art of the contemptuous sneer in The Patriot), a racist, classist and possibly villainous wizard whose son Draco (Tom Felton) is Harry’s chief rival at school; the Malfoys scorn Ron and his family for their poverty, and they also look down on Hermione Granger (Emma Watson), Harry’s other best friend and a real keener at school, because she is the offspring of muggle parents. Harry also bumps into Gilderoy Lockhart (a cheerfully flamboyant Kenneth Branagh), the vain but cowardly celebrity wizard who is Hogwarts’ new Defense against the Dark Arts teacher.

But alas, even these characters are lost in the film’s rush to get from one plot point to the next, and we don’t spend much time either with the holdovers from the previous film, who include Maggie Smith as Minerva McGonagall, Alan Rickman as Severus Snape, Robbie Coltrane as the burly groundskeeper Hagrid and the late Richard Harris as the wise headmaster Dumbledore. In addition, the effects keep flying at the screen so fast that there is little time to savour the mischievous pixies, the gigantic spiders, the combative tree, the howling letter from home, the screaming mandrake roots, the diary that has a mind of its own, or the ghost that haunts the girls’ bathroom (Topsy-Turvy’s Shirley Henderson, who, at 36, is a little old to be playing a dead schoolgirl).

The effects team does, at least, show Hogwarts from some new and previously unexplored angles, and there’s a fantastic chase sequence in which Harry and Draco race each other behind the stands during an unusually dangerous game of quidditch, the sport that’s played on flying broomsticks. But too much of this film is devoted to spectacle, and too little to creating the sense of character that would make the mystery meaningful. For all the effort that has been put into squeezing as much of the plot as possible into the film, I suspect the average moviegoer may be confused if he or she hasn’t yet read the novel.

If you liked the first Harry Potter movie, then you’ll probably like the second one. But if the first movie left you scratching your head and wondering what all the fuss was about, then you needn’t bother. Read the books instead.

November 21, 2002 Random Wrath of Khan thought.
Recent Comments
0 | Leave a Comment
""AD" stands for "Anno Domini", a Latin expression meaning "In the Year of Our Lord".So ..."
Peter T Chattaway The Chosen — season one, episode ..."
"Why does it say at the start of episode 3 that it takes place 26 ..."
Desiree Chamberlain The Chosen — season one, episode ..."
"What about Hellboy, The Grudge, Ghoulies, and Anaconda?"
45th Spiderbob Group VGCP When R-rated franchises go PG-13 …
"Not yet, but I might do something like that once Season 2 is complete."
Peter T Chattaway The Chosen — season one scripture ..."
Browse Our Archives
get the latest from
FilmChat
Sign up for our newsletter
POPULAR AT PATHEOS Entertainment
1