Christopher Nolan sure likes to play with time.

His first major film, Memento, alternated between a main story told in reverse chronological order and a back-story told forwards. And all three of the non-Batman movies that he made over the past decade — Inception, Interstellar and even Dunkirk — juggled parallel storylines that unfolded at different speeds.

Now he’s gone the next logical step and made an out-and-out time-travel movie. Except he doesn’t call it time travel, exactly. Instead, he calls it “inversion”.

The basic idea is that, while most things in our world move one way in time, there are certain objects — and, eventually, people — who have been subjected to a form of radiation that makes them go the other way in time. So what looks like forwards motion to us looks like backwards motion to them, and vice versa.

Our first sign of this “inversion” is a bullet that flies out of a chair and backwards into a gun, just missing our protagonist — a government agent whose only name in the credits is, literally, The Protagonist (played by BlacKkKlansman’s John David Washington).

A scientist of some sort introduces The Protagonist to a collection of objects that have been “inverted”. She worries that if bullets can travel backwards in time, wreaking who knows what havoc, then even bigger weapons can be sent back in time, too.

The Protagonist has a hard time wrapping his head around the physics and metaphysics of all this, and odds are good that you will, too. Nolan’s films have often relied heavily on exposition to explain how the plot mechanics are supposed to work — think of all those dreams within dreams in Inception — and Tenet is his trickiest film yet.

Matters aren’t helped by the fact that the dialogue rushes by at a fast clip and is often hard to understand, partly because there are many scenes in which many of the characters are wearing breathing masks. (If you thought Bane was hard to hear in The Dark Knight Rises, imagine a movie filled with such characters.)

With the threat of a “temporal Cold War” looming between our time and the future (that phrase will be very familiar to Star Trek: Enterprise fans), The Protagonist goes on a mission to put a stop to this threat, and the resulting plot has something to do with arms dealers from India and Russia, and luxury yachts, and whatnot.

Between the complicated physics, the muffled dialogue, and the various characters who drop in and out of the story, I couldn’t make heads or tails of what was happening for the first hour or so, and I tried to just bask in the spectacle for its own sake, from a traveling heist that involves several moving vehicles on a freeway, to an airplane that crashes into a hangar. (And yes, Nolan crashed a real airplane into a hangar. If he had been the one directing Titanic, he would have built an actual ocean liner and sunk it.)

But then, at a certain point, things began to click. Scenes that had played in one direction are revisited by characters moving in the other direction, and suddenly the action held together in a way that it never had before. And then the movie climaxes with a major military-style assault that is shown from both perspectives simultaneously.

It’s still rather confusing, and I suspect it would all crumble under closer scrutiny — the same way Memento’s plot holes stand out when you rearrange the scenes chronologically — but on a visual and narrative level, it has its pay-offs.

The big villain of the film, incidentally, is a guy named Andrei Sator, a Russian arms dealer and ferociously abusive husband played by Kenneth Branagh. 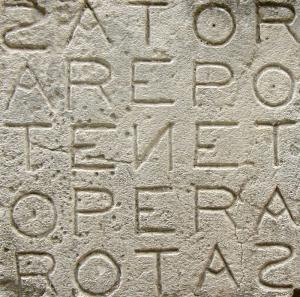 His name, like the movie’s title, is a nod to the Sator Square, a famous set of five Latin words (Sator Arepo Tenet Opera Rotas, which means, roughly, “The farmer Arepo uses his plough to work”) that can be read forwards and backwards. Every one of those words appears in the film: Rotas is the name of a corporation, Arepo is the name of a painter, and the film begins with an attack on an opera house.

The earliest known example of this square was found in the ruins of Pompeii, which was destroyed by a volcano in AD 79, and wouldn’t you know it, but Pompeii is mentioned within the film as well!

While no one knows exactly who first came up with the Sator Square, it apparently became popular in Christian circles because the central word Tenet — which can mean “belief” — forms a cross within the square, and the letters of the square can be rearranged to form a cross that says Pater Noster (“Our Father”) in two directions.

The film doesn’t get into all that, but, interestingly, it does tap into notions like “faith” and even “God”. These references are, admittedly, extremely brief, but that just underscores the fact that they didn’t need to be mentioned at all — and yet they were.

To come at this from another angle: Nolan’s films have sometimes flirted with solipsism, or the idea that the only thing we can ultimately know is ourselves.

Memento and Interstellar both revealed that the main characters, without realizing it, had essentially been taking orders from themselves, and not from the conspirators or extraterrestrials that they had been looking for outside of themselves — and Tenet, with all its time-loopiness, sometimes seems to point in that direction too.

But the villain, Sator, is depicted as a person who would rather destroy the world than let it go on without him — and in response to this, The Protagonist tells him, “You don’t believe in God, or a future, or anything outside of your own experience.” Solipsism, of this sort at least, is clearly depicted as a negative worldview.

Meanwhile, in another scene, someone declares, “What’s happened has happened,” and then that person adds: “It’s an expression of faith in the mechanics of the world.”

The emphasis on mechanics might not point to anything quite as transcendent as some of us might like, but the point is still made that we need “faith” to believe in a world — any sort of world — outside of ourselves, and that this is the better path.

— Tenet opens today in theatres across Canada. The film is rated PG in most provinces and 13+ in Quebec. It is also rated PG-13 in the United States, where it will open September 3. 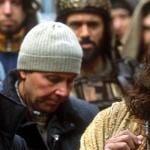 October 9, 2020 Jim Caviezel says the Passion of the Christ sequel is still happening
Recent Comments
0 | Leave a Comment
"Animation would uniquely allow the creator to show the genitalia without getting into the waters ..."
Kellen The naked Christ in film: birth, ..."
"Gentlepersons:While I am a lifelong Christ-follower and served as Chaplain to a graduate program in ..."
Darrell A. Harris Exclusive: Patrick and Paul Aiello on ..."
"I know this is from 5 years ago, but I just got around to seeing ..."
digital bookworm Exclusive: Watch the trailer for Becoming ..."
"Thanks so much for making this list. I was thinking of doing something similar, but ..."
Bill Kudrle The Chosen — season one scripture ..."
Browse Our Archives
Related posts from FilmChat