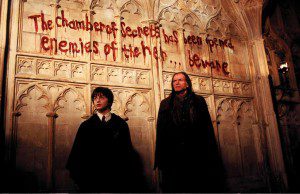 HARRY POTTER and his friends may soar through the air on broomsticks and dangle from flying cars in Harry Potter and the Chamber of Secrets, the latest chapter in J.K. Rowling’s ongoing saga about a young orphan and his classmates at a boarding school for witches and wizards, but the film itself never takes flight the way it ought to.

Despite the wealth of special effects that fill nearly every frame of this film, director Chris Columbus and screenwriter Steve Kloves bring the same pedestrian sensibility to this story that they brought to the earlier installment. They faithfully cram as many of the book’s plot twists into their two-and-a-half-hour running time as possible, and in doing so, they unintentionally sacrifice much of the story’s personality and charm.

Unlike the first film, which had to set up the entire wizarding world from scratch as well as tell an intriguing tale in its own right, The Chamber of Secrets can devote all its energies to telling its central mystery story — and so it does. But it is precisely because the film assumes our familiarity with its setting and its colourful cast of characters that it loses some of the magic of the earlier film; in a word, the sense of discovery is gone.

Still, there are a few moments when a sense of wonder does peek through, such as when Harry (Daniel Radcliffe) visits the home of his friend Ron Weasley (Rupert Grint) and sees for the first time how everyday wizards live; the dishes wash themselves, and so forth. Harry’s awe is amusingly reciprocated by that of Ron’s father (Mark Williams), who is intrigued by the way things work in the non-magical world; at one point, Mr. Weasley asks Harry intently, “What exactly is the function of a rubber duck?”

The film introduces a few new characters, including Gilderoy Lockhart (a cheerfully flamboyant Kenneth Branagh), a vain but cowardly celebrity professor who would much rather sign autographed copies of his memoirs than teach the children anything useful, and Dobby (voice of Toby Jones), an obsequious “house elf”, or domestic slave, who bangs his head on things to punish himself whenever he speaks ill of his unidentified master.

Harry also meets Lucius Malfoy (Jason Isaacs, who mastered the art of the contemptuous sneer as a British officer in The Patriot), a racist, classist wizard whose son Draco (Tom Felton) is Harry’s chief rival at school. The Malfoys scorn Ron and his family for their poverty, and they also look down on Hermione Granger (Emma Watson), Harry’s other best friend besides Ron, because she is the offspring of non-magical parents.

The legitimacy of Harry’s magic, and its relative worth compared to the magic practised by Gandalf, Aslan, and the witches in Madeleine L’Engle’s books, has been a subject of intense debate in Christian circles and will likely continue to be so. For now, it is worth noting that there are no angels or demons in Harry’s world, and that the magic he practises is really just another form of technology; note how Ron’s wand backfires on him, or malfunctions, after he breaks it and tries to fix it.

The important lesson running through these stories — and it is one Christians can appreciate — is that people should neither abuse the power they have nor look down upon those who are not as gifted as they.

Parents and other adults have raised other concerns regarding these stories. Some object to the violence, and understandably so; at one point in this film, Harry stabs a giant monster through the roof of its mouth. But children do hear similarly bloody stories in Sunday School — recall how the young David kills and beheads Goliath — so there may be a place for that sort of thing for children who can handle it.

Others have criticized the Potter stories for being little more than a flavour of the month, a passing fad that publishers and filmmakers are exploiting for financial reasons. There may be some truth to that, but the striking thing about The Chamber of Secrets is how it can stir the longing to be part of something much older than oneself. The first film was largely about Harry’s need to get in touch with the memory of his parents, but the new film revolves around a mystery that goes back to the founding of Harry’s school a thousand years ago, and it reaches its climax when Harry brandishes a sword left by one of the school’s founders.

As the film ends, Harry is beginning to find his place within an established tradition, and this can speak very powerfully in this day and age to people who feel rootless and long to be connected to a community with a past. If anything, Christian parents should be able to embrace this longing, and to encourage their children to find its fulfillment in our own faith, which has a colourful history and tradition of its own.

— A version of this review was first published at CanadianChristianity.com.

November 15, 2002 Review: Harry Potter and the Chamber of Secrets (dir. Chris Columbus, 2002)
Recent Comments
0 | Leave a Comment
""AD" stands for "Anno Domini", a Latin expression meaning "In the Year of Our Lord".So ..."
Peter T Chattaway The Chosen — season one, episode ..."
"Why does it say at the start of episode 3 that it takes place 26 ..."
Desiree Chamberlain The Chosen — season one, episode ..."
"What about Hellboy, The Grudge, Ghoulies, and Anaconda?"
45th Spiderbob Group VGCP When R-rated franchises go PG-13 …
"Not yet, but I might do something like that once Season 2 is complete."
Peter T Chattaway The Chosen — season one scripture ..."
Browse Our Archives
get the latest from
FilmChat
Sign up for our newsletter
POPULAR AT PATHEOS Entertainment
1

Entertainment
Watch: A clip from The Making of The...
FilmChat
TRENDING AT PATHEOS Entertainment