Those of who you find the title of this post inherently distasteful may want to skip this one; and those of you who have seen me write about this subject elsewhere will find little new here, save for one point that comes up near the end.

I won’t be writing anything particularly graphic of my own here, but I will be quoting some comments that Michael Medved and his younger brother Harry made a quarter-century ago in a book called The Golden Turkey Awards, back when the elder Medved was known mostly as a bad-movie buff and had not yet become a religious culture warrior. The very first page declares …

A Challenge To The Reader:
Over 425 actual films are described in this book, but one is a complete hoax. Can you find it?

… and I have long wondered if the “complete hoax” in question might be Him, the alleged 1974 gay-porn film about Jesus and/or a present-day man who obsesses over him sexually. This is how the film is described on page 165, where it is listed as one of the nominees for “The Most Unerotic Concept in Pornography”:

This innovative film, designed exclusively for gay audiences, goes into excruciating detail concerning the erotic career of Jesus Christ. The ads for the film show the face of The Savior (with a cross glistening in one eye) while the headline inquires “Are You Curious About HIS Sexual Life?” Filmmaker Ed D. Louie satisfies that curiosity by showing us that the Son of Man was a voracious homosexual. (After all, why did he spend all that time hanging around with the Apostles?) The central character of the film is actually a young gay male in contemporary America whose sexual obsession with Jesus helps him to understand the “hidden meaning” of the Gospels.

And then, on page 168, when it is declared the winner in its category, the Medveds write:

Now, like I say, I have often wondered whether Him might be the hoax in question, but since it won the ‘Golden Turkey Award’ in its category, I kind of assumed it wasn’t; that is, I assumed only one of the also-rans would be the hoax. The possibility that this film actually existed was given a boost when I came across a reference to it in Roy Kinnard & Tim Davis’s Divine Images: A History of Jesus on the Screen, which lists all the Jesus films made up to 1992 and has this to say at the end of the intro on page 18:

Dramatic films that contain only fleeting glimpses of Jesus, but do not otherwise concern themselves with the subject, are also excluded; among them, The Birth of a Nation (1915) and Sparrows (1926). Otherwise unrelated films that use brief appearances by Christ or Christ-like figures merely for shock or satirical effect are not examined; this category includes such diverse titles as L’Age D’Or (1930), Gas-s-s-s (1970), A Clockwork Orange (1971), The Devils (1971), Savage Messiah (1972), The Trial of Billy Jack (1974), and The Visitor (1980). Sub-professional, amateur productions like The Sin of Jesus (1961) and Multiple Maniacs (1970) also are excluded. So are animated films such as The Star of Bethlehem (both 1921 and 1969 versions) and pornography like Him (1974) and I Saw Jesus Die (1976).

However, in October 2003, I chanced upon this comment at the Snopes urban legend site:

We’ve been unable to turn up anything to confirm this purported film’s existence, however — we’ve never found a copy of it, anyone who has seen it, or a review of it, nor have we located any other reference to the film or “filmmaker Ed D. Louie” anywhere other than this one entry in the Golden Turkey Awards book.

As of today, the relevant paragraph has been revised to this …

However, this minor, low-budget film is so impossibly obscure (we’ve never found a copy of it, anyone who has seen it, or a review of it, nor have we located any reference to the film or “filmmaker Ed D. Louie” outside of Medved’s Golden Turkey Awards book) that it’s hard to imagine it could have triggered a massive outpouring of petitions to stop its production.

… which suggests the site may be more open to the possibility of this film’s existence now than they were before.

Anyway, this reminded me of how it had always seemed a little suspicious to me that Him did have one of the shorter write-ups in the Medveds’ book, and that it was one of only three award “winners” that did not even have a photo (the others being Rat Fink a Boo Boo and Attack of the Mushroom People — both of which have IMDB entries, BTW, which Him does not). And I suppose it’s possible that Kinnard & Davis’s only source of info for Him, which they evidently felt no desire to track down, may have been the Medveds’ book. Running a Google search for more info, I came across a site that stated even more definitively:

Michael Medved, a well-known film reviewer, wrote a book with his brother that was published in 1980 called the “Golden Turkey Awards.” It reviewed bad films. Medved claimed that it was a review of over 425 actual films, but that he had included one hoax and asked readers to spot it. The hoax was a review of a non-existent 1974 film called “Him” which supposedly portrayed Jesus as a homosexual. The film never existed.

But then, the plot thickened. In March 2004, someone on one of the listservs I frequent rattled off a list of unorthodox Jesus movies, and he included Him, to which he added this parenthetical remark: “I know many on the Internet say this movie is an Urban Legend, but I remember actually seeing the newspaper ad.” He later said he may have seen it in the Ottawa Citizen.

Well, I haven’t checked any of the microfilms from that era, but I did e-mail Medved through his website to see if he could confirm or deny whether this film was the “hoax” that he and his brother had planted in their book. I never heard back from him. 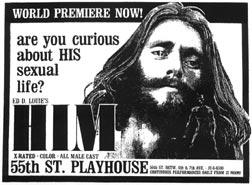 At any rate, I would be curious to know what Medved has to say about all this now. Someone in my Sunday School class gave me this book as a birthday present when I was 11 or 12 years old, and the comments on this film in particular bothered me a fair bit at that time; it planted images in my mind that I could have done without. If Medved was perpetrating a hoax, then I think he has some ‘splaining to do. And if he wasn’t … well, then, for starters, I would like to know just which film in his book was the hoax!

MAY 22 UPDATE: Thanks to Mark Goodacre for linking to this post, and for noting the interesting fact that this film, if it really was made in 1974, would have been made just one year after Morton Smith published his books on the alleged Secret Gospel of Mark, a version of which the Carpocratians may have used for a more homoerotic form of Christianity in the 2nd or 3rd century. (Smith’s claims are so controversial, they continue to make the news, as they did just the other day in Maclean’s magazine.)

May 14, 2005 Just a few quick news links
Recent Comments
20 Comments | Leave a Comment
"What a strange article. Using movies as your basis to defend that Lazarus was murdered ..."
Mark Ross DeFazio The death, resurrection, and second death ..."
"Another with Ethiopian eunuch and Philip https://archive.org/details..."
Jason McKahan Watch: Philip is the original vanishing ..."
"I found Hanky Panky a pretty cool 80s movie when I first saw it on ..."
UniblabBR Sidney Poitier marathon: Hanky Panky (1982) ..."
"In 1972, yes. The movie was made in 1956 but the ratings system didn't exist ..."
Peter T Chattaway One of the reasons I do ..."
Browse Our Archives
get the latest from
FilmChat
Sign up for our newsletter
POPULAR AT PATHEOS Entertainment
1