DeMille and Gibson — design or chance?

Hmmm, I can’t allow an entire weekend to go by without posting something.

I just got home from a screening and discussion of Mel Gibson’s The Passion of the Christ at Granville Chapel, and this gave me an opportunity to play with screen captures and slide shows and other programs I am only just beginning to learn how to use.

I would have used actual moving clips, but I have not yet figured out how to extract them from the original DVDs; the only alternative would be to give the audio/visual guy a stack of discs and wait for him to load up each new disc and fumble his way through the menu screens and chapter breaks. Rather then endure all that, I captured still images and put ’em in Power Point.

I used several other images besides the ones presented here, but I present these because I am curious about something. I began my review of Cecil B. DeMille’s The King of Kings (1927) by saying:

The success of Mel Gibson’s The Passion of The Christ has brought renewed attention to the old biblical epics, and if there is any one film that shares Gibson’s visual sensibility and his pious but sometimes lurid flair for melodrama, it would have to be Cecil B. DeMille’s The King of Kings . . . Both films feature a hedonistic banquet populated by laughing revelers and a leopard on a leash. Both films feature a crow perched on a thief’s cross. And both films feature fantastic earthquake sequences after Jesus dies — though no one can match DeMille, who seems to think he’s making another Moses movie, for sheer over-the-topness.

Here are the leopard and crow examples, specifically — with the top image from DeMille, and the bottom image from Gibson: 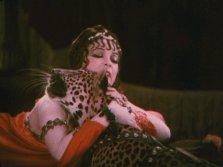 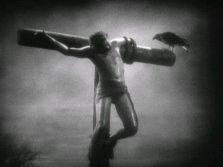 What I am wondering is whether there is an existing artistic tradition to which both of these films are paying homage, on these points, or whether Gibson might have been influenced by DeMille directly in any way. Given that Gibson filmed his exteriors in the same basic location where Pier Paolo Pasolini filmed The Gospel According to St. Matthew (1964), and given that the music in Gibson’s film was influenced by Peter Gabriel’s score for Martin Scorsese’s The Last Temptation of Christ (1988), it would be kind of neat if we could say that Gibson’s film was borrowing from the key Jesus films produced in these three very distinct eras.

AUG 30 UPDATE: Okay, here’s another example. Note how Jesus carries a full cross while the thieves carry only crossbeams. 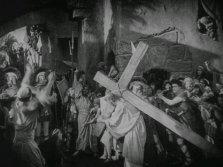 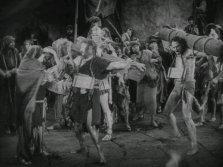 This particular sequence in DeMille’s film jumped out at me, when I saw it a year or two ago, because I had always thought it was common belief, until recently, that every condemned man carried his full cross; and I had always thought that it was not until fairly recently that films like Franco Zeffirelli‘s Jesus of Nazareth (1977) and Campus Crusade’s Jesus (1979) had insisted on showing Jesus and the thieves carrying only their crossbeams. I was aware that traditional art has long suggested that the thieves were not crucified the same way Christ was, but I was not aware that any distinction had been made in the kinds of crosses that they bore.

August 29, 2005 Canadian box-office stats -- August 28
Recent Comments
2 Comments | Leave a Comment
"Whoever wrote this article called Mary a virgin. She was only a virgin till after ..."
Ronnette Harvey The latest attempt to film all ..."
"In addition to this explanation of why "Paul says he can’t tell the Roman Christians ..."
PaulDT Paul, Apostle of Christ: a scene ..."
"Outstanding outline and identification of references and sources as well as background. Thank you so ..."
PaulDT Paul, Apostle of Christ: a scene ..."
"" So now, basically, the Magi are just a substitute for Santa Claus." <- Well... ..."
The 3 Wise Men — not ..."
Browse Our Archives
Follow Us!