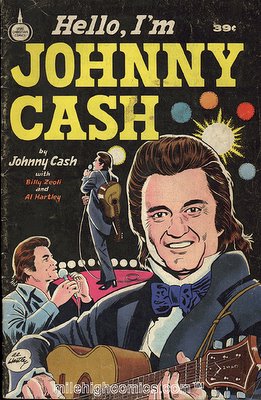 Anybody else remember this comic book? Hello, I’m Johnny Cash was one of a number of Spire Christian Comics produced by Al Hartley in the 1970s, along with a bunch of religious Archie comics and adaptations of evangelical best-sellers like The Hiding Place and The Cross and the Switchblade. It came out shortly after Cash produced his musical life-of-Jesus movie The Gospel Road (1973), which — for whatever it’s worth — came out the same year as Jesus Christ Superstar and Godspell.

I haven’t read this particular comic in years, maybe even decades, but I found myself thinking about it tonight while watching Walk the Line, the new biopic starring Joaquin Phoenix as Cash and Reese Witherspoon as his eventual wife June Carter. Since the film doesn’t come out for another couple weeks, I won’t say much about it just yet, but suffice to say it brought back memories of this comic — three pages of which you can read here — and it is very interesting to see how the Christian comic and the secular movie agree and disagree on certain details of Cash’s life.

This difference in interpretations is especially interesting to me because I’ve never been much of a country fan, so for most of my life, until I began to follow pop culture more seriously about a decade ago, most of what I knew about Cash was what I had gleaned from this comic and similar Christian sources. And you know what they say about first impressions being lasting ones.