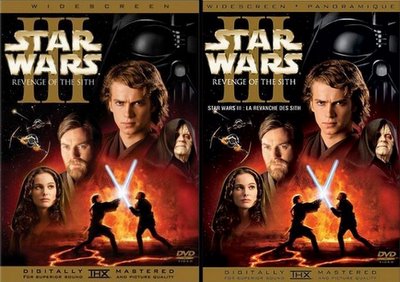 On the left, the American DVD. On the right, the Canadian DVD. I actually don’t mind the French bits on the front cover. But I really, really don’t like the way the DVD cover’s spine features two versions of the title, which means it features the Star Wars logo twice. This bugs me, because the Canadian DVDs for Episodes I, II, IV, V and VI all feature the Star Wars logo only once, like they’re supposed to. So now, when I put the DVD for Episode III on the shelf between the other episodes, it will stand out, painfully, from the rest. (If I had a digital camera, I’d take a picture.)

It’s kinda like how the first two Harry Potter movies were released in paper cases, and the third movie was released in a plastic case. Put the three movies together — and you can buy them in a boxed set — and they don’t look quite like they belong together.

But bilingual DVD packaging in general is an old pet peeve of mine. I don’t like my DVDs to look like cereal boxes, and sometimes the English and French titles are so similar, so identical even, that you wonder what the point of it all is supposed to be.

Anyway, due to a very busy and hectic personal and professional life right now, I haven’t had time to sample anything on this DVD, except for about half of the audio commentary. So I can’t comment on the disc’s actual content just yet — except to say that I am very, very intrigued that producer Rick McCallum confirms what many Star Wars fans have suspected: namely, in the “opera” scene where Palpatine tells Anakin the story of the Sith lord who learned how to create life, he is revealing Anakin’s origins.

NOV 2 UPDATE: It also dawns on me that this film came out six months ago, when my wife was not yet pregnant with twins; so the scenes where Anakin and Amidala discuss their impending family come across a bit differently to me, now. But I am even more convinced than ever that it is utterly ridiculous that the Galactic Republic, with all its fancy-schmancy midichlorian-manipulating technology, would have had no way to calculate the number of fetuses in Amidala’s womb. And that’s before we consider whether Anakin should have been able to “sense” his offspring.

NOV 6 UPDATE: Finally finished watching the extras. There is so much exposition and stating of the obvious in Lucas’s scripts, it figures that most of the commentary is similarly obvious and expository. Characters keep explaining what’s going on; Lucas and company keep explaining what the characters are explaining.

FWIW, the weirdest thing I’ve learned from the DVD is that the volcanic-planet scenes were based on footage of eruptions on Mt. Etna that were shot by Ron Fricke, the cinematographer on Koyaanisqatsi (1983) and the director of Baraka (1992).

November 2, 2005 Hello, I'm walking the line
Recent Comments
4 Comments | Leave a Comment
"This was a refreshing read. I'm an average fan of Hellboy but I'm also a ..."
Andrew Mathews Doug Jones on Hellboy and Christianity.
"Great interview! One thing I've wondered since watching Season 1 is why they didn't include ..."
A.J. Cattapan Interview: The Chosen writer-director Dallas Jenkins ..."
"Earth actually does exist in the Dark City universe. Early in the film when John ..."
Edward Clint Dark City and the ambiguous ending.
"I don't always agree with your opinions, but your reviews are never less than interesting ..."
Laura-Lee Rahn The top-grossing Italian movie of 2019: ..."
Browse Our Archives
Follow Us!