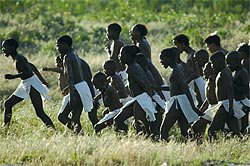 Remember how, six months ago, I linked to an article which mentioned in passing that some South African filmmakers were completing “a modern day take on the life and death of Christ, billed as the first black Jesus film”? IndieWIRE‘s new article on the films that will be playing in competition at Sundance in January concludes with this paragraph:

FWIW, the British Films Catalogue sums the film up thusly:

Based on the New Testament, the narrative unveils a portrait of a man of our time whose currency is the politics of compassion. It is a gripping journey of love, deception and betrayal in a conflicted society.

Okay, I admit, neither of these synopses mentions Johannesburg by name. But what can I say, I like the alliteration.

UPDATE: Son of Man rates a brief mention in Variety, too.