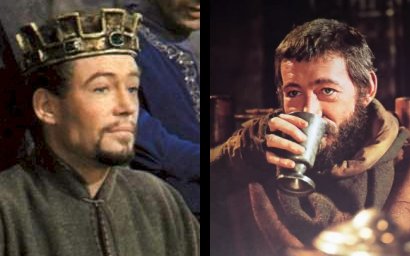 The latter film is not a sequel to the former, even though it takes place some years later and features the same actor in the same role. Instead, each film is based on a play that makes fictitious hay out of an episode in Henry’s life, and each play was written by a different playwright, and each film was made by a different crew — so the artistic and dramatic agendas are entirely different, and apart from O’Toole, the two films have very little in common.

Which is not to say that they don’t overlap. I watched both films back-to-back today, and was amused to see that, in both films, Henry refers to his wife Eleanor of Aquitaine — who is more loyal to their son(s) than to him, and thereby basically wants him dead so that one of her boys can be on the throne — as his “widow”.

Also, in Lion, when Eleanor taunts her rampantly unfaithful husband with her own legacy of love affairs, she briefly claims to have slept with Thomas Becket — and before she retracts the claim and says it was a joke, we can see that Henry is deeply troubled by the mention of this name (not necessarily because Becket might have slept with Eleanor; just being reminded of his former friend, whose death was partly his fault, is enough to trouble Henry).

The films were made only four years apart, but O’Toole seems a heck of a lot older in the later film. The first movie spans two decades, beginning prior to Becket’s rise to the Chancellorship in 1155 and ending with Becket’s murder in 1170, and setting the story between a prologue and epilogue that take place in 1174. Henry is no more than 22 when the story begins, and 41 when the final scene ends — and O’Toole was 31 when the movie came out, so he was perfectly suited to play both ends of that spectrum.

The second movie covers just a few days circa Christmas 1183, when Henry was a couple months shy of 51 — and when that movie came out, O’Toole was 36. But thanks to some effective make-up and the gravitas of his performance, he looks and feels every bit the character’s age. The fun-loving, overgrown adolescent of Becket, whose heart can be broken by a close friend, has given way to a much more bitter and cynical (but still very temperamental) man — and one who is all too aware of his looming mortality.

Incidentally, Eleanor of Aquitaine would have been about 61 when the second film takes place, and in it, she is played by Katherine Hepburn, who was precisely that age when the film came out. But O’Toole’s performance is so good that you don’t really think of Hepburn as being all that much older than her co-star.

It’s hard to say which is the more interesting film. Becket is about a noble and even transcendent idea — the possibility of honour, and the prices we pay whether or not we pursue it or submit to it — whereas Lion is one of those harder-to-define relationship dramas.

On the other hand, Lion offers an entertaining glimpse inside an extremely dysfunctional family, and serves it up with razor-sharp wit and a sort of constant cold-blooded one-upmanship that I find much more dynamic than Richard Burton’s stern toeing of the Church’s party line in the second part of Becket. (Burton was not the most reliable of actors, and I don’t get much of a sense of the character behind the dialogue when he begins speechifying.)

I must say, though, that I got a kick out of seeing Donald Wolfit, a fixture among British supporting actors of that era, as the Bishop of London in Becket. In Lawrence of Arabia (1962), he played the British officer who sent Lawrence — played by the then-unknown O’Toole — into Arabia in the first place. Now, two years later, O’Toole is the star whose name appears above the title, and Wolfit is as flustered with him as ever — but as a subordinate. Cute.

Oh, and John Barry‘s score for Lion — for which he won the second of four Oscars — sounds rather reminiscent of Jerry Goldsmith’s later score for The Omen (1976), I think. Note how he mixes the urgent orchestral low notes with the choral chants, etc. 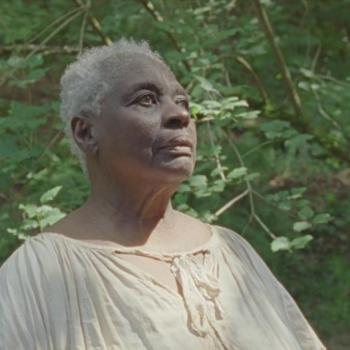