My sister’s gonna kill me, but I can’t help myself …

A year and a half ago, I mentioned that my sister Monica had worked as an extra on a few films and TV shows while living in Toronto in the early 1990s, including the legal thriller Guilty as Sin (1993). Luckily for me, by the time the film came out in theatres, my sister had moved back home to Vancouver, so I was able to see her debut on the big screen — with her!

And boy, is there a lot of her in that film; she may be an extra, but she does have a “role” of sorts, inasmuch as she is not just another person sitting in on a trial, but an actual court reporter, complete with a pencil and a pad of paper. She appears in multiple scenes, as the movie’s central court case drags on, and something I didn’t notice until today is that she seems to move from one side of the courtroom to the other, over the course of the film.

Lately I’ve been having fun capturing images off of DVDs and using them to illustrate my posts, and it occurred to me that it shouldn’t be all that hard to track down a copy of this film on DVD and document my sister’s appearances there. So, now, I have. Click on the images below for even higher-resolution versions. 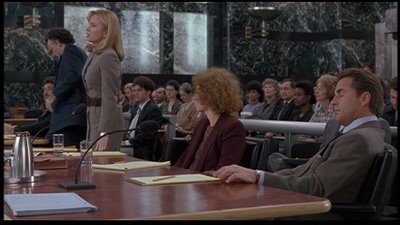 In the first scene, she is sitting on the left side of the courtroom (that is, from the point of view of the judge’s side of the bar, which is where the camera is for most if not all of these scenes). She’s wearing glasses and her hair is pulled back, and you can see her just a few faces behind Rebecca De Mornay’s waist. 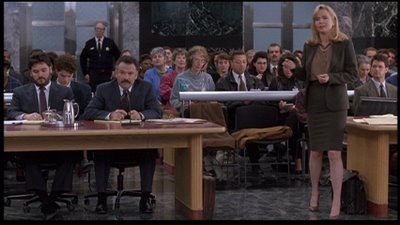 In the second scene, she is now sitting on the right side of the courtoom, and her hair’s a little different, and she’s got her pencil, and her face is almost immediately to the left of De Mornay’s hand. And although you can’t see it here, this scene requires her to “act” a little; Don Johnson does something that elicits a comment from the judge, which in turn makes everyone in the courtroom laugh — and Monica shares a smirk with someone sitting next to her. 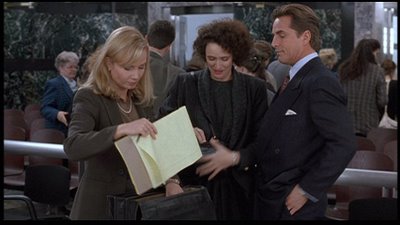 This is from the end of the second scene, when everyone leaves the courtroom; that’s her with the long hair on the far right. 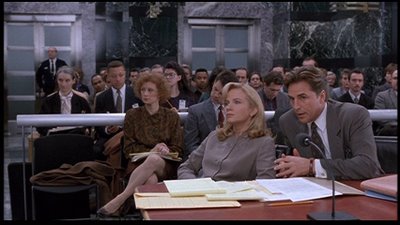 Another scene, another session, as she watches the prosecution very intently with her pencil in her hand. 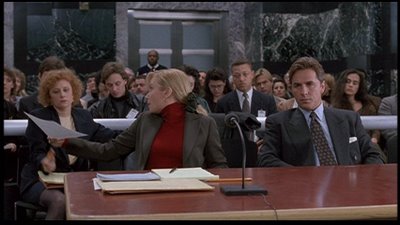 This is at least the fourth scene in which she appears, and she seems to have edged a little closer to the right; that’s her, looking down at her notepad, to the right of De Mornay’s head. 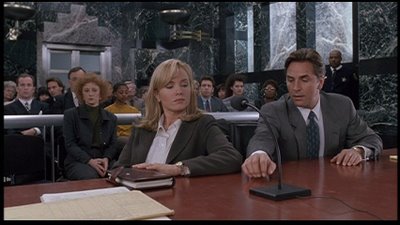 The final courtroom scene, in which the jury delivers its verdict, puts Monica almost at the far right of the room; her hair is different again, and for the first time, she is not wearing glasses.

September 18, 2006
Vicar of Dibley moves to smalltown Georgia
Next Post

September 20, 2006 Fox launches Christian film, video label
Recent Comments
3 Comments | Leave a Comment
"I certainly hope to! Just haven't had the time to do Season 2 yet."
Peter T Chattaway The Chosen — season one scripture ..."
"Hi Peter.Thanks for this extensive list. Will you be doing the same for all seasons? ..."
Meelperd The Chosen — season one scripture ..."
"I have neither noticed that much. I recenty read a leadership book inspired from Cyrus ..."
Hamid Mortazavi Cyrus the Great — a Persian ..."
""AD" stands for "Anno Domini", a Latin expression meaning "In the Year of Our Lord".So ..."
Peter T Chattaway The Chosen — season one, episode ..."
Browse Our Archives
get the latest updates from
FilmChat
and the Patheos
Entertainment
Channel
POPULAR AT PATHEOS Entertainment
1