The big news story yesterday was that 20th Century Fox has started a new boutique label called FoxFaith — which, according to its website, specializes in “family and Christian films”, in that order.

The existence of this label wasn’t news to me, since Tim Willson — a Christian film and video insider who compiles the monthly Crown Chronicle — has talked about the existence of this label before, and I, prompted by his updates, had already checked out the label’s website a few weeks ago. But as far as many were concerned, the Los Angeles Times “broke the story” yesterday by announcing:

In the biggest commitment of its sort by a Hollywood studio, News Corp.’s Fox Filmed Entertainment is expected to unveil plans today to capture the gargantuan Christian audience that made “The Passion of the Christ” a global phenomenon.

The home entertainment division of Rupert Murdoch’s movie studio plans to produce as many as a dozen films a year under a banner called FoxFaith. At least six of those films will be released in theaters under an agreement with two of the nation’s largest chains, AMC Theatres and Carmike Cinemas.

The first theatrical release, called “Love’s Abiding Joy,” is scheduled to hit the big screen Oct. 6. The movie, which cost about $2 million to make, is based on the fourth installment of Christian novelist Janette Oke’s popular series, “Love Comes Softly.”

Jeffrey Wells and the New York Times then corrected or clarified this story by noting that Fox will not be producing these films, but rather, it is acquiring them for video distribution; and the ones that get theatrical distribution will be handled by an independent company, The Bigger Picture, though there will be some overlap with FoxFaith’s video promotion; e.g., Love’s Abiding Joy comes out on DVD in January, and is already available for pre-orders. 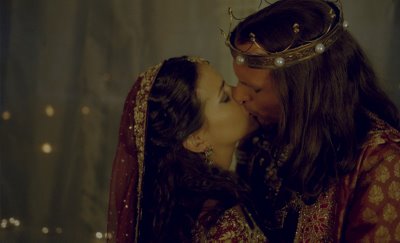 The second FoxFaith film to get theatrical distribution will apparently be One Night with the King, Matthew Crouch’s much-delayed adaptation of the Book of Esther; it comes out in theatres October 13. And it looks like the third film to hit theatres — though it’s not listed at the Fox Faith Movies website — will be The Color of the Cross, which apparently speculates that the historical Jesus might have been black; it comes out October 27.

A few things about this announcement give me pause.

First, as some people have observed, there is a “cult of the family” in evangelical circles that is borderline idolatrous — as David Bruce once noted, some churches now even call themselves “family worship centres” — and the fact that “family” comes before “Christian” in FoxFaith’s self-description is very telling.

Second, this pandering to the evangelical consumer will almost certainly include a kind of “dumbing down” to the lowest common denominator; films which try to express any kind of bold, personal, artistic, or even political vision will be shunted aside. Consider this portion of the Los Angeles Times story:

The experience [of producing and distribting Hangman’s Curse] taught Jeff Yordy, vice president of marketing for FoxFaith, a valuable lesson about the Christian audience when an avalanche of letters flooded his office from Christians protesting a Bible study companion to the film.

“We got 10,000 letters from ministers telling me I was not interpreting the scripture correctly,” recalled Yordy, a Christian. “You have to take a broader perspective so everybody can interpret based on their own faith.”

And then consider this portion of the New York Times story:

Jeff Yordy, Fox Home Entertainment’s vice president for marketing, said the studio was looking to acquire similar films, while avoiding any that might have political overtones — for instance, films with an anti-abortion message.

“That’s the mission: quality, story-driven entertainment that meshes with the values of our target audience,” he said. “But it’s entertainment first. We’re not in the business of proselytizing.”

Now, to be fair, I would have no interest in propaganda either. And a film like The Color of the Cross could certainly turn out to be somewhat controversial, even divisive — so it looks like FoxFaith is willing to take a few risks here or there. But just how far are they willing to let the envelope be pushed? Will, say, The Passion of the Christ be the only R-rated film in their roster?

Third, the growth of these boutique labels just adds fuel to the fire of a concern that I expressed over three years ago in my review of the video releases of Jonah: A VeggieTales Movie (2002), Left Behind II: Tribulation Force (2002) and Joshua (2002):

Don’t get me wrong, I like a lot of music that can usually be found only at Christian book stores. But there once was a time when magazines like Campus Life reviewed mainstream music as well as the relatively small number of albums put out by Christian artists. That was what Christian critics had to do if they wanted to engage the culture on some level.

However, in more recent years, as the Christian music scene has grown into the institution that it is today, it has become all too easy for we Christians to focus on our own little niche market and to ignore the larger musical world as a whole.

So far, movies are a different story. They cost a lot of money to make, and there just aren’t that many Christian films out there. So one of the joys of being a Christian film critic is that you have no choice but to constantly interact with the world outside the Christian ghetto. . . .

At the time, that article of mine stirred up some controversy here, but I have to say I still stand by what I wrote.

September 20, 2006 "Spaceballs, the cartoon show!"
Recent Comments
8 Comments | Leave a Comment
"I have neither noticed that much. I recenty read a leadership book inspired from Cyrus ..."
Hamid Mortazavi Cyrus the Great — a Persian ..."
""AD" stands for "Anno Domini", a Latin expression meaning "In the Year of Our Lord".So ..."
Peter T Chattaway The Chosen — season one, episode ..."
"Why does it say at the start of episode 3 that it takes place 26 ..."
Desiree Chamberlain The Chosen — season one, episode ..."
"What about Hellboy, The Grudge, Ghoulies, and Anaconda?"
45th Spiderbob Group VGCP When R-rated franchises go PG-13 …
Browse Our Archives
get the latest updates from
FilmChat
and the Patheos
Entertainment
Channel
POPULAR AT PATHEOS Entertainment
1