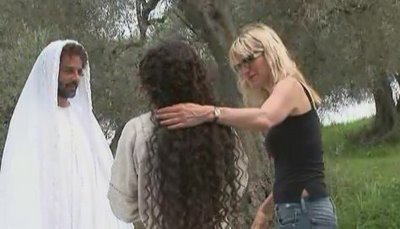 Queen Spoo has posted a very brief but interesting interview with Alexander Siddig, who plays the archangel Gabriel in the upcoming movie The Nativity Story. The most interesting bits:

1.) How did playing the role of the archangel Gabriel compare to other roles you have played?

I’ve enjoyed most of the roles I’ve played but the archangel was different because most people have an idea of what they think an angel is. But in a sense I had more leeway, many characters have to be mined for their ‘humanity’ – an angel doesn’t for obvious reasons. . . .

3.) How did you decide to portray an angel, a divine/supernatural being?
As I said, there are preconceptions which exist in everybody (who cares) about an angel but there is also complete freedom because no one can be sure they’ve ever seen one. Catherine, the director, and I basically plumped for someone who appeared to be slightly different everytime he appeared, depending on whom Gabriel was in the presence of. For example, if he appeared before a child, then he might be very simple – but before a king, he may be more complex. The ultimate aim was to be easily understood by whomever. His message was the important thing. A kind of psycholgical Proteus and a super-intense being. . . .

Interesting that he would say this character doesn’t need to be mined for his “humanity”. It does raise the question: What exactly is the difference between an angel and a human being, as far as an actor’s performance goes? We know that angels are — or at least were — capable of free will, just like human beings, otherwise there would not be any fallen angels. And that, in and of itself, could make them more than two-dimensional, and thus more “human”, as that word is often used when discussing actors’ roles.

I am also intrigued by the depiction of Gabriel in this Orthodox hymn to the Virgin Mary, and how it grants him a subjective point of view that you don’t get from any of the biblical accounts:

Awed by the beauty of thy virginity and the exceeding radiance of thy purity, Gabriel called out unto thee, O Theotokos: “What worthy hymn of praise can I offer unto thee? And what shall I name thee? I am in doubt and stand in awe. Wherefore, as commanded, I cry to thee: Rejoice, O Full of Grace.”

An angel saying, “I am in doubt and stand in awe.” I think that’s an amazing concept, and I kinda hope this movie reflects it.

As it is, it’s remarkable to see Gabriel at all in this film. Most other filmic depictions of the Nativity have left Gabriel out altogether, or have reduced him to a beam of light coming in the window or reflected off the water, or have obscured the actor by bathing him in light, or some such thing. But based on the glimpses we have seen so far, it appears this film will be a lot more direct about the archangel’s involvement in heralding the birth of Christ.

September 25, 2006
Monty Python and the Revenge of the Sith
Next Post

September 25, 2006 Bon Cop, Bad Cop breaks Quebec's record
Recent Comments
0 | Leave a Comment
"I have neither noticed that much. I recenty read a leadership book inspired from Cyrus ..."
Hamid Mortazavi Cyrus the Great — a Persian ..."
""AD" stands for "Anno Domini", a Latin expression meaning "In the Year of Our Lord".So ..."
Peter T Chattaway The Chosen — season one, episode ..."
"Why does it say at the start of episode 3 that it takes place 26 ..."
Desiree Chamberlain The Chosen — season one, episode ..."
"What about Hellboy, The Grudge, Ghoulies, and Anaconda?"
45th Spiderbob Group VGCP When R-rated franchises go PG-13 …
Browse Our Archives
get the latest updates from
FilmChat
and the Patheos
Entertainment
Channel
POPULAR AT PATHEOS Entertainment
1