Mary Goes to the Movies / How the mother of Jesus has been portrayed through a century of filmmaking. 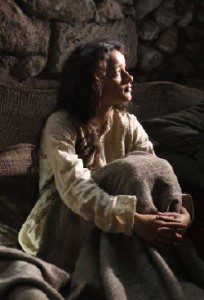 Making a movie about Jesus is difficult enough. Anyone who would dramatize the life of Christ must strike a fine balance between his full humanity and his full divinity, and many filmmakers have erred on one side or the other. But at least the Scriptures give us ample data to work with, and at least there is broad agreement across church boundaries that Jesus was, and is, both divine and human.

But making a movie about Mary poses even thornier challenges. The Bible says little about her life, so dramatists who focus on her life — such as the writer and director of The Nativity Story, which opens Friday — must invent whole aspects of her story from scratch. Even more daunting, for filmmakers who want to reach as broad an audience as possible, is the fact that different churches have strongly different views on Mary.

Was she as fallible as any other human being? Or was she free from the stain of sin? Did she bear any other children? Or did she remain a virgin throughout her life? Should Jesus ever be shown correcting her, possibly even offending her? Or, as the mother of Jesus, should she offer him any guidance and possibly correct him?

The earliest Bible movies didn’t have to wrestle with these questions so much, partly because the silent era relied heavily on traditional religious iconography — which is to say, Catholic iconography — for its visuals.

The Life and Passion of Jesus Christ, a French production released in various versions between 1902 and 1905, was more of a pageant than a drama, each scene a tableau illustrating an episode from the Gospels or from later legends. Much of it concerns the birth of Jesus, and there is little concern for realism; the baby Jesus appears in the manger, seemingly out of thin air, while Joseph and Mary are praying.

Later films brought more dramatic innovation, while piling on the visual symbolism. The silent Ben-Hur (1925) begins with an extensive Nativity sequence, in which Mary smiles beatifically at an angry woman and a stubborn innkeeper and, by the sheer power of her pretty gaze, melts both their hearts. Doves fly around her as Joseph — an old man who seems more guardian than lover — leads her donkey on. When they come to the cave where Jesus will be born, she declares, “This place is sanctified.” And when the shepherds arrive, the film switches from black-and-white to an early form of Technicolor — and Mary’s head is crowned by a full-blown halo.

There is no Nativity sequence in The King of Kings (1927), which begins when Jesus is already an adult; but director Cecil B. DeMille gives Mary a heightened role, and uses some of the same symbols, especially the doves. Although he was a Protestant, DeMille’s Mary owes much to Catholic piety; her attire resembles a nun’s habit, her youthfulness (the actress was in her late 20s) hints at her incorruptibility, and she is first seen bringing a blind girl to Jesus and interceding on the girl’s behalf.

A few decades would pass before Hollywood turned to the Gospels again, and when it did, Mary was once again treated with special reverence. The remake of Ben-Hur (1959), starring Charlton Heston, gives a few lines of dialogue to Joseph, during the Nativity and afterwards, but it keeps Mary in the distance, obscured by shadow — just as it will eventually limit its depiction of Jesus to the back of his head.

Two years later, Nicholas Ray’s King of Kings (1961) endowed Mary with some of the authoritative qualities that she had had in the silent era. Characters like John the Baptist visit Mary when they need help trying to understand their recent encounters with her son. Mary Magdalene even asks Mary to “intercede” for her. Finally, Jesus himself visits Mary before going to Jerusalem for that fateful Passover, and she seems to have a deeper awareness of what will happen to him there than he does.

By the time this film came out, audiences had begun to tire of lavish big-studio Bible epics. So when Pier Paolo Pasolini, a gay Italian Marxist, released The Gospel According to St. Matthew (1964) — with its scrappy black-and-white cinematography, its cast of real-life peasants, and a script in which virtually every line of dialogue comes straight from Matthew’s Gospel — it was hailed by many as a culturally and historically realistic rebuttal of the films that had preceded it.

Yet even here, a mystical sensibility prevails. Our first image of the pregnant Mary, seen from the point of view of a distraught Joseph, is startlingly blunt — but note the arch under which she stands, a visual motif that harks back to Renaissance art. Pasolini also heightens Mary’s role beyond what Matthew’s Gospel tells us, by putting her at the Crucifixion (as per John’s Gospel) and the Resurrection (a detail that is included in a number of films, but not in any of the canonical gospels).

The counter-cultural films that followed — Jesus Christ Superstar (1973) and Godspell (1973) — were exclusively concerned with the relationship between Jesus and his hippie-like followers, and never bothered to incorporate Mary into their storylines. But the late 1970s saw, on television, a renewed interest in Mary — as well as, for the first time since the silent era, an intense focus on the Nativity.

Franco Zeffirelli’s mini-series Jesus of Nazareth (1977) runs to well over six hours without commercial breaks, and the birth and childhood of Jesus consume nearly an hour and a half of that running time, forming almost a feature film unto itself.

In some ways, Zeffirelli retains the mystical emphasis of previous films. The Mary of his film speaks very few lines that do not come straight from Scripture, and she seems to sense that something is about to happen, well before the angel actually appears to her; as one of the neighbors tells Joseph, “She’s always been a bit strange.” But Zeffirelli also plays up aspects of Mary’s humanity that previous films had ignored completely; this just might be the first film to show Mary going into labour, and feeling the pain that goes with it, as she gives birth to Jesus.

In Zeffirelli’s film, the marriage between Mary and Joseph is more of a social contract than anything else, but the TV movies that followed — The Nativity (1978) and Mary and Joseph: A Story of Faith (1979) — emphasized the romantic attraction between their protagonists, with awkward if not embarrassing results (though Mary and Joseph does integrate or allude to other biblical passages in interesting ways, most notably by depicting the rebellion of Judas the Galilean mentioned in Acts 5:37).

If prior decades were marked by piety and romance, the 1980s brought scandal and controversy. Jean-Luc Godard’s Je vous salue, Marie (1985) sets the Nativity in modern-day Switzerland, and it was protested at the time by the Pope and others because it frequently depicts Mary in the nude, as she ponders the changes to her body. Ironically, Godard never questions the virginal conception; instead, he explores the idea that God, in becoming human and living within a womb, has affirmed and elevated the human body, and specifically the female body.

Mary also appears briefly in what may be the ultimate scandal film, Martin Scorsese’s The Last Temptation of Christ (1988). When Jesus returns to Nazareth and is rejected by his neighbors, Mary begs him to come back to her home, and Jesus replies, “I don’t have a mother. I don’t have any family. I have a Father, in heaven.” As Mary walks away crying, a friend tells her that there were thousands of angels surrounding Jesus as he spoke. “I’d be happier if there weren’t,” Mary replies.

This may be the only scene in a major film that captures how shocking it might have sounded when Jesus said it was his followers, and not necessarily his relatives, who were his true brothers, sisters, and mothers (Mark 3:20-35). Most films that touch on this episode have tweaked it to eliminate any possible offense. In Campus Crusade’s Jesus (1979), Jesus smiles as he recites this line — to Judas Iscariot! — and then he leaves the room, presumably to greet the family waiting outside. In Zeffirelli’s film, the line is spoken by Mary herself, when the admiring disciple John visits her. And in Mary, Mother of Jesus (1999), a TV movie produced by members of the Catholic Kennedy clan, Mary calmly explains what Jesus meant by this line.

The new millennium has seen several new movies based on the life of Jesus, and in all of them, Mary plays at least a small role.

The most powerful of these depictions of Mary, by far, is in Mel Gibson’s The Passion of The Christ (2004), which emphasizes her uniquely mystical qualities. Like Jesus, she can see Satan among the crowds, and in one scene, she can sense her son’s presence in a dungeon beneath the floor. However, Gibson also emphasizes that Mary is a mother like any other mother, by showing how overwhelmed she is by the suffering her son endures.

Most filmic portrayals of Mary have been, in some sense, Catholic by default. Even the most liberal and scandalous of films have taken for granted that Mary and Joseph raised only one child, Jesus, and have thus implicitly affirmed the ancient tradition that the “brethren” of Jesus were his step-siblings or cousins. (A noteworthy exception is the recent film Color of the Cross, in which James, the brother of Jesus, is explicitly identified as Mary’s son — and the entire family is black.)

Almost no major film has followed the Eastern Orthodox tradition that Joseph was a widower before his betrothal to Mary, and considerably older than her. (The silent version of Ben-Hur may be the only Hollywood feature that allows for this.)

And films that reflect a more Protestant sensibility, such as George Stevens’ The Greatest Story Ever Told (1965) or the animated feature The Miracle Maker (2000), have tended not to develop Mary all that much beyond a cameo or two — presumably because her explicit role in the Gospels isn’t much bigger than that.

Fortunately, because it is rooted so firmly in the Bible, the birth of Jesus provides an excellent place for Christians of all stripes to explore the character of Mary. And as far as the movies are concerned, The Nativity Story just may be the boldest attempt yet to flesh out the one from whom God the Son himself took flesh.

— A version of this article first appeared on the Christianity Today Movies website.