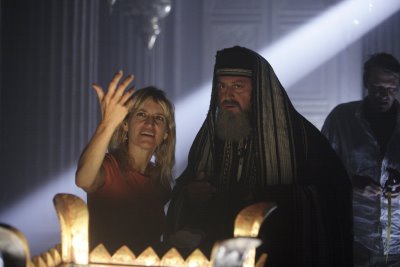 It’s time for more extended and deleted quotes from the Nativity Story junket! The interviewee this time is Catherine Hardwicke, director of this film, as well as Thirteen (2003) and Lords of Dogtown (2005). Portions of this roundtable interview, which took place in L.A., already appeared in my first junket report.

Asked how she made the transition from the “sex, drugs and rock ‘n roll” of her previous teen-oriented films, she replied:

CH: This movie is about the most famous teenager in history, who had maybe the biggest obstacles that she had to face and the most extraordinary challenges, so in a way you could say it’s part of my teen trilogy. (laughs) But I think that the idea of realizing that this woman was only 13 or 14 years old and had to face these enormous challenges at such a tender age, which is an age that I am familiar with– Because many of my friends, like Nikki Reed, have gone through so many difficult things at that age, which is why I made the movie [Thirteen], because Nikki and her family were suffering, and in that film, in Thirteen, I tried to take you into the house of a real teenager and feel what it was like to be in a battlefield, between her and her mother, and try to create something that could be a healing experience for other families. We were on Oprah for an hour, where they showed the movie to mothers and daughters and discussed the issues, and we did things with all kinds of groups all over the country, using it as cinema therapy as kind of a healing tool. And Dogtown was [about] boys that came from a difficult family life, parents that just weren’t engaged. And so, in this case, two thousand years ago, how similar is that to teenage life now? I mean, there are still struggles with the parents, but of course Mary had this extraordinary situation, being told that she would bear the Son of God, and then having people looking down on her, not believing her, [and treating her like an] outcast. How did she find faith in herself and inner strength to overcome this? So I felt there was some kind of continuity, and I tried to do similar things, to really take you back to Nazareth, and to take you back into real-life, real-person, real situations that you could relate to. If you’re a guy, how would you feel if your fiancée that you love so dearly comes back home and she’s pregnant, and you know you’re not the father, and she says it’s going to be the Son of God? I mean, that’s a tough one for any man to get his head around, y’know? (laughs) And it had never happened before. And why would god choose her? She’s a poor peasant. And no one knew how extraordinary she was at that moment.

Asked if her version of Mary might be a tad modernized — as in, for example, the scene where she walks out after being told that she will marry Joseph, a man she does not love — Hardwicke replied:

CH: When you read about life at the time, biblical times, and how children were much more obedient and parents had probably more power than parents seem to have today– And parents did make that decision for a daughter, but still, you know, human nature is the same, and if somebody tells you you’re going to marry this man, and that’s not somebody that you felt a connection with or any reason to [marry], and you still wanted to be a child and you didn’t understand, how would you really feel if that happened to you? So I think we tried to– She doesn’t say anything against her parents, it’s just a feeling that she leaves, she leaves and she has to think about it, process this, and you hear her inner thoughts: “Why are they forcing me to marry this man?” She doesn’t protest and say that she won’t, she’s just trying to process it.

Asked why the Joseph of this movie is so much younger than the traditional portraits of Joseph as an older man, she made some comments about life expectancy in the first century and the “salt and pepper” in Oscar Isaac‘s hair, and then she added:

CH: My niece is 20, and she saw the trailer. She goes, “Ew, he looks so old!” So maybe to you and I, he didn’t look that old, but to a young girl, she’s like, “He looks so old, why would you like him?” So some people think he looks older.

And, most tantalizing of all, when she was asked about the absence of any depiction of synagogue life in the film, despite reports that a synagogue had been built on the set, there was this exchange:

CH: You see the rabbis standing in front of it in one of the first shots in Nazareth; you see the soldiers passing by it, also. And we did film a scene inside the synagogue, too, and it will be on the DVD as a deleted scene. I hate to say, it’s my own fault, because I did the scene in about 15 minutes, and I just didn’t do that great a job of the scene. It’s not my best work, so it didn’t quite make the movie. But it’s going to be on the DVD.

PTC: What happens in the scene?

CH: In the scene, it was part of kind of the shunning sequence, so you saw of course the men sitting on the one side and the women sitting on the other side, and you saw Joseph and Joaquim sitting together, but the other men weren’t exactly looking at him, so they were kind of– There was a distance. Now other Jewish scholars are another reason I didn’t put the scene in the movie. Jewish scholars told me that really when you go to Yom Kippur, the Day of Atonement, you have the shawl over your head, the prayer shawl, and you are not supposed to be judging people when you’re in church, and so it was maybe wrong to show that they were kind of judging Mary. You’re really supposed to be looking straight ahead and having your own relationship with God, not a judgmental relationship, thinking about your own sins. So in a way the scene probably wasn’t accurate.

PTC: So that scene was supposed to specifically be Yom Kippur?

TM: Although if they of course had been violating tradition in order to judge them, that would have made the scene powerful in its own way. They succumb to temptation.

CH: It was one of those– You’re going to see– I’d love to see what you guys think when you see the DVD, because it was questionable whether it was– I didn’t want to be disrespectful to the Jewish faith, and I felt that was a little bit on the edge of possibly being disrespectful. I thought it would be powerful, but then, if these were devout Jews and they knew what that day was about, then they should not be passing judgment on others, in the synagogue especially. I don’t know if I made the right decision, but you’ll see, when you see the DVD.

Stay tuned for even more interviews from the junket!

November 30, 2006 Mary Goes to the Movies / How the mother of Jesus has been portrayed through a century of filmmaking.
Recent Comments
0 | Leave a Comment
""AD" stands for "Anno Domini", a Latin expression meaning "In the Year of Our Lord".So ..."
Peter T Chattaway The Chosen — season one, episode ..."
"Why does it say at the start of episode 3 that it takes place 26 ..."
Desiree Chamberlain The Chosen — season one, episode ..."
"What about Hellboy, The Grudge, Ghoulies, and Anaconda?"
45th Spiderbob Group VGCP When R-rated franchises go PG-13 …
"Not yet, but I might do something like that once Season 2 is complete."
Peter T Chattaway The Chosen — season one scripture ..."
Browse Our Archives
get the latest updates from
FilmChat
and the Patheos
Entertainment
Channel
POPULAR AT PATHEOS Entertainment
1