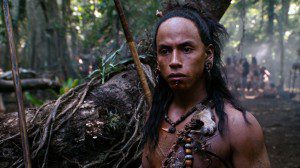 Say what you will about Mel Gibson, but there’s no denying the man knows how to use a camera — which is more than can be said for many other actors who have turned to directing. His skills as an auteur have become especially apparent over the course of his last two films, The Passion of The Christ and now Apocalypto, both of which feature mostly unknown actors speaking ancient languages; the absence of big stars and readily intelligible dialogue keeps us focused on the visuals, which are bold and unsettling throughout. Gibson also made both films with his own money, so for better or for worse, they truly represent his personal artistic vision, unlike many so-called “independent” films that are tweaked by their distributors. But that means Gibson’s weaknesses are just as evident in these films as his strengths.

Apocalypto begins with a shot that brilliantly distills the essence of the movie, as the camera slowly moves in on some bright green forest plants, and a pair of feet suddenly rush past in the foreground. This is a chase movie with an environmental theme, and the footsteps that momentarily block our view of the foliage bring to mind the opening shot of the similarly-titled Apocalypse Now, in which helicopters whirred by in front of us just before laying waste to the jungles of Vietnam.

But it turns out the main chase has not yet begun; the feet that rush by are actually those of a Mayan forest-dweller who, together with other men from his tribe, is hunting a tapir (an animal related to the horse and the rhinoceros). The method by which they catch the animal is ingenious but also rather crudely violent; and as soon as they sit down to cut out its organs, the script turns crude in other ways, too. It seems one of the men, whose name is Blunted (Jonathan Brewer), has a wife who has not yet borne him any children, so his friends goad him into eating the tapir’s testicles, telling him it will help him to prove his virility. When he gags on the gonads, the men laugh — and that’s only the beginning of their taunts.

All four of the films Gibson has directed — including The Man Without a Face and Braveheart — have been, at least to some degree, about father-son relationships and the role they play in shaping what it means to be a man. (Even The Passion begins with Satan taunting Jesus, “Who is your father? Who are you?”) In Apocalypto, that theme is expressed primarily through the character of Jaguar Paw (Rudy Youngblood), who receives stoic advice from his father Flint Sky (Morris Birdyellowhead) and struggles mightily to save his pregnant wife Seven (Dalia Hernandez) and their son Turtles Run (Carlos Emilio Baez) when their village is raided by a war party from a nearby city.

Jaguar Paw successfully hides his family in an underground cave — a well, perhaps? — but he himself is captured by the raiders, who proceed to enslave most of the adults that they have not already killed or raped. The adults are then taken through the forest, across a river, past fields of failing crops, and into a city where the women are sold into slavery while the men are painted blue and led to the temple.

Their fate is foreshadowed in gruesome ways, first as they approach the temple and witness the grim relics of human sacrifice, and then, as they enter and walk past a series of paintings which spell out in horrifying detail what will happen to them once they reach the top of the pyramid. What transpires after this is best saved for the film, but we already have an inkling that at least some of these men will survive. We know that Jaguar Paw, after all, has to go back and retrieve his family from their hole in the ground. And a diseased girl has already taunted Jaguar Paw’s captors by uttering a series of prophecies — prophecies that require at least one or two of these men to escape the war party — and in movies like this, prophecies always come true.

Despite the film’s two-hour-plus running time, the characters are never particularly developed; Gibson is working with archetypes, not real people, and he could just as easily have named his characters Family Man and Pregnant Wife. While the archetype approach may make the movie more accessible, it also distances us emotionally from Jaguar Paw’s plight; we object to the sacking of his village on principle, but not necessarily because we feel any connection to him as a person. Gibson is more interested in the chase itself, as Jaguar Paw outruns and outsmarts the Mayans who pursue him.

But even more than that, Gibson is obsessed with the nature of violence — and, for that matter, with the violence of nature. Snakes and jaguars attack people without warning, and the opening scene of the hunt, and the distribution of the tapir’s organs afterwards, anticipates the later scene of human sacrifice. But there are crucial differences between the two scenes, too. Jaguar Paw and his kin do not derive any sadistic pleasure from killing their prey, and for them, the hunt is an opportunity to come together as men — as human beings — as much as it may be anything else. But the priests and soldiers from the city seem to delight in cruelty, and for them, other people are animals, to be hunted for sport, exploited for labor, or offered up to gods whose thirst for human blood is as insatiable as it is inexplicable.

Gibson, as usual, finds himself in the middle; he is a sadist who rubs our faces in cinematic violence, and he is also a masochist who figures the best way to deal with the violence he sees in the world is to accept it and absorb it somehow. But where The Passion gave his admirers an easy out — between Jesus taking the pain and his enemies inflicting it, we side with the pain-taking, no question — Apocalypto is harder to pin down. One man, who is clearly meant to be a role model of sorts, faces his own death with incredible resolve, betraying no emotion and barely any suffering. But Jaguar Paw must fight back, at least to save his family, so the film takes a few steps back to the revenge-seeking ways of Braveheart and other Gibson flicks.

It will be interesting to see what Christian movie buffs in particular make of this film. When The Passion came out, there was much speculation that Gibson had become “one of us,” and there were many requests for Gibson to follow it up with a movie about the Maccabean revolt, Saint Francis, or any of a number of other biblical and religious subjects. Instead, with a budget rumoured to be over $70 million — much of it amassed from The Passion’s profits — Gibson has made a bloody flick about death and social decay in a pagan culture, and he hints ever so obliquely that the world has not fared any better under we Christians. After watching Apocalypto, some people may find they cannot watch The Passion the way they used to.

1. A recurring theme in this film is “Don’t fear.” Is fear ever a good thing? How does fear motivate the characters in this film (Jaguar Paw, the priests, etc.)?

2. How does this film depict religious belief, whether institutional or grassroots? How does it fit depictions of religion in Mel Gibson’s other films?

3. Three Gibson films in a row have now featured scenes of public execution. How do these scenes resemble or differ from each other? How is the death of Jesus in The Passion similar to, or different from, the human sacrifice in Apocalypto, or William Wallace’s death in Braveheart?

4. Does the film go too far with the violence? How much of it is justified? How does this film encourage us to regard violence in the real world? As a natural thing? As an aberration?

5. What do you make of the girl’s prophecy, or of the final scenes? What role does Christianity play in this film, however obliquely?

Apocalypto is rated R for sequences of graphic violence and disturbing images, including the slaughter of animals, animal attacks on human faces and necks, ritual scenes of decapitation and organ removal, and various slashings, stabbings, spearings, clubbings, and impalings. One scene is shot from the point of view of a sacrificial victim’s newly severed head. A man eats an animal’s testicles, and later runs around naked (while hiding his privates with his hand) as he suffers the adverse effects of an aphrodisiac gone wrong. A woman is dragged offscreen to be raped, and another woman gives birth. The f-word appears once, in a subtitle.

December 8, 2006 Apocalypto -- the review's up!
Recent Comments
0 | Leave a Comment
"What about Hellboy, The Grudge, Ghoulies, and Anaconda?"
45th Spiderbob Group VGCP When R-rated franchises go PG-13 …
"Not yet, but I might do something like that once Season 2 is complete."
Peter T Chattaway The Chosen — season one scripture ..."
"Is there a PDF or printable version of this extensive list? I would love to ..."
Liza The Chosen — season one scripture ..."
"What a strange article. Using movies as your basis to defend that Lazarus was murdered ..."
Mark Ross DeFazio The death, resurrection, and second death ..."
Browse Our Archives
get the latest from
FilmChat
Sign up for our newsletter
POPULAR AT PATHEOS Entertainment
1