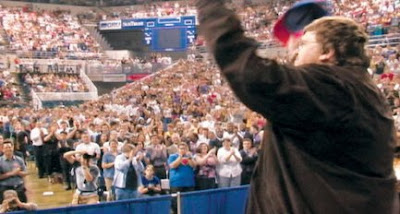 Brian D. Johnson of Maclean’s reports on the premiere of Michael Moore’s latest movie, Captain Mike Across America, in Toronto:

It’s a “concert film” documenting Moore’s Slacker Uprising Tour through 62 American cities in swing states during the final days of the 2004 presidential campaign. He appeared with performers including Joan Baez, Roseanne Barr and REM. The tour, he says, was an attempt “to save the Democrats from themselves.”

I decided to attend the premiere, rather than the advance press screening, because Moore would be in attendance, which is always a show. And it turns the film into a kind of 3D concert movie—a big tent rally with the live theatre audience cheering on Mike along with the crowds onscreen.

“This is a little secret project we’ve had laying around for a while,” Moore told the TIFF audience as he introduced the film. “We shot it three years ago and decided to put on the shelf, because we were just too depressed.”

It’s not clear exactly why he decided to release it now, but it’s a bit odd—watching one rousing arena rally after another in a buoyant campaign that we know is headed for a heart-breaking defeat. And no matter how genuine Moore’s motives are, this film won’t do anything to dispel arguments by his critics that his mission is fueled by a super-sized ego. Although the TIFF audience seem to love every minute of the movie, and gave it a standing ovation, I found it unsettling to watch Moore being introduced over and over again, in a Groundhog Day cycle of adulation. Also, there is more of Moore the hectoring politican than Moore the sly comedian here. . . .

Afterwards, Moore engaged in a Q & A, and cited a critic who asked him why he put so much of himself in the film. He said that’s like asking U2 why there’s so much Bono. Moore admitted he wasn’t exactly “easy on the eyes” and can’t bear to watch himself on the big screen (he sat through the premiere with Canadian relatives).

Moore also talked about being the target of a massive smear campaign. “It even comes from Candians now, this disinformation campaign about me.” And he said what he left out of the film, for fear of encouraging it, was a series of attempt assaults on him during the tour—ranging from a knife-weilding attacker who jumped onstage to a cup of “scalding hot” Starbucks coffee. (The guy must have ordered an extra-extra hot no-foam latte). . . .

Of course, what Moore apparently neglected to mention is that it is not merely Canadians who are openly criticizing his dishonest methods, but his fellow left-leaning filmmakers.

And it isn’t only sympathetic Canadians who are put off by Moore’s self-indulgence. Glenn Kenny at Premiere.com writes:

A portion of this Michael Moore picture, then called Slacker Uprising Tour, was screened at Cannes as a work-in-progess on the same bill as Sicko. It is not apt to supplant Sicko, or anything else, in Moore’s filmo. As an intertitle early in the picture admits, the movie is about Moore’s “failed attempt” to save John Kerry from himself after Kerry’s too-little, too-late response to his Swift-boating. For those who remain highly agitated by the results of the 2004 election, this picture, its upbeat “we gotta keep fighting” coda notwithstanding, might play as a particularly unpleasant bout of scab-picking (hey, there’s an alternate title for ya). In the final weeks before the election, Moore toured multiple cities in multiple swing states, trying to get out the vote. And this film is, well, a lot of footage from that tour, mostly of Moore addressing mostly adoring audiences. (Advertisement for Myself is another potential alternate title.) . . .

Captain Mike Across America is easily Moore’s weakest film, a self-congratulatory mess that has nothing to say about the American political process and tells you everything you need to know about the numbing cult of personality that’s sprung up around Moore. It’s not so bad that there’s a cult of personality around Moore — as I’ve said of Moore before, some Americans are so desperate for someone to speak truth to power that they’ll settle for someone saying anything to it. What’s bad is that Moore seems to be buying into his own myth, now, and here that seems both narcissistic and futile. . . .

Moore’s weakest film? Even worse than The Big One (1997), which revolved around a promotional book tour? This I gotta see.

SEP 11 UPDATE: Lou Lumenick of the New York Post calls the film “a self-tribute documentary that shows how Moore may have played an even bigger role than even Osama in getting Dubya re-elected with his 60-city college tour in 2004.” Yowch.

September 6, 2007
There Will Be Blood poster goes biblical
Next Post

September 9, 2007 Indiana Jones and the Kingdom of the Crystal Skull
Recent Comments
0 | Leave a Comment
Browse Our Archives
get the latest updates from
FilmChat
and the Patheos
Entertainment
Channel
POPULAR AT PATHEOS Entertainment
1