There Will Be Blood poster goes biblical

Behold the new teaser poster for There Will Be Blood, Paul Thomas Anderson’s adaptation of Upton Sinclair’s Oil!, which stars Daniel Day-Lewis as an oil prospector and Paul Dano as a preacher: 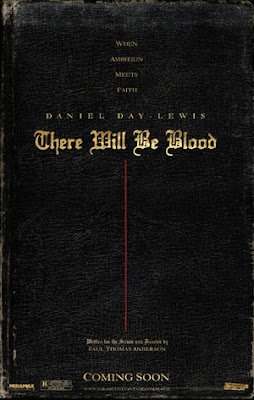 You can’t say that a one-sheet using the suggestion of an old, dog-eared Bible to spread awareness of an allegedly violent period film about the oil business that’s based on an anti-capitalism book isn’t, at the very least, striking. It’s saying, obviously, that Paul Thomas Anderson‘s There Will be Blood (Paramount Vantage, 12.26) will address bedrock moral issues. Of course, all that blackness suggests somberness, bitterness and severity as well. But this is just a teaser poster (surfacing over three and a half months from release). Other themes and designs will surely follow.

And just in case you haven’t seen it yet, here is a collection of clips that made the rounds a few months ago:

September 7, 2007 Two Michael Moore films in one year!?
Recent Comments
0 | Leave a Comment
"I have neither noticed that much. I recenty read a leadership book inspired from Cyrus ..."
Hamid Mortazavi Cyrus the Great — a Persian ..."
""AD" stands for "Anno Domini", a Latin expression meaning "In the Year of Our Lord".So ..."
Peter T Chattaway The Chosen — season one, episode ..."
"Why does it say at the start of episode 3 that it takes place 26 ..."
Desiree Chamberlain The Chosen — season one, episode ..."
"What about Hellboy, The Grudge, Ghoulies, and Anaconda?"
45th Spiderbob Group VGCP When R-rated franchises go PG-13 …
Browse Our Archives
get the latest updates from
FilmChat
and the Patheos
Entertainment
Channel
POPULAR AT PATHEOS Entertainment
1