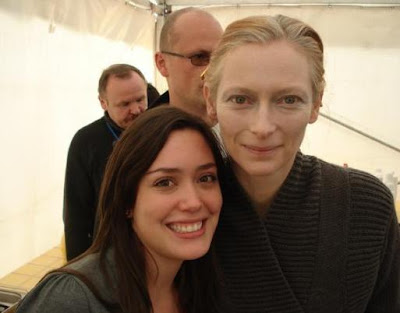 NarniaWeb reports that Tilda Swinton, who played the White Witch in The Lion, the Witch and the Wardrobe (2005), was spotted recently on the set of Prince Caspian, where the photo above was taken. If she wasn’t just paying the crew a visit — if she’s actually going to appear in the film — then either they’re shooting brand-new flashback scenes, or the scene from the book where certain characters talk about bringing the White Witch back from the dead is going to be pushed beyond the conversation stage.

Oh, wait. Apparently that was the White Witch glimpsed behind the ice in the teaser that came out recently. Until now, the only version I had seen — and I wasn’t looking at it closely — was some low-rez YouTube thing and I must have assumed the figure reaching out to Caspian was another nymph or something. There’s no mistaking who it is in the high-def version, though.

MAR 15 UPDATE: Tilda Swinton has told the MTV Movies Blog she isn’t in the film, even though she appears to be in the trailer: “They have my image in their computer bank. They can do whatever they want. . . . They can make me sell whatever they want.” The folks at NarniaWeb take this to mean that her visit to the set “was perhaps just a friendly visit and not for a day of shooting.”

APR 2 UPDATE: On the other hand, the Disney Insider is now reporting that Tilda Swinton “portrays the vile White Witch in both films” — and since it’s their studio, they should know, right?

December 21, 2007 No double dipping for The Nativity Story?
Recent Comments
1 Comment | Leave a Comment
"I certainly hope to! Just haven't had the time to do Season 2 yet."
Peter T Chattaway The Chosen — season one scripture ..."
"Hi Peter.Thanks for this extensive list. Will you be doing the same for all seasons? ..."
Meelperd The Chosen — season one scripture ..."
"I have neither noticed that much. I recenty read a leadership book inspired from Cyrus ..."
Hamid Mortazavi Cyrus the Great — a Persian ..."
""AD" stands for "Anno Domini", a Latin expression meaning "In the Year of Our Lord".So ..."
Peter T Chattaway The Chosen — season one, episode ..."
Browse Our Archives
get the latest updates from
FilmChat
and the Patheos
Entertainment
Channel
POPULAR AT PATHEOS Entertainment
1