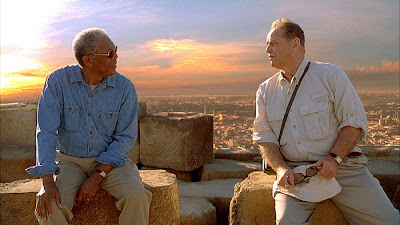 One, The Bucket List could, in one sense, be the latest entry in the “romantic buddy comedy” genre that Justin Shubow identified a few months ago; I quoted bits of his article here and here.

Shubow was primarily concerned with films featuring actors in their 20s and 30s, whereas The Bucket List stars two men who turned 70 during or after their work on the film; but it is striking nonetheless to see how the story goes through some of the standard rom-com beats — including the break-up 15 minutes before the end — and how the Jack Nicholson character explicitly compares the Morgan Freeman character to at least one of his wives, and remarks that he’s never been to a certain restaurant with “a guy” before.

Two, this film just might mark the first time that director Rob Reiner has given up his anti-religious prejudice and, indeed, become a bit more open to matters of faith.

Reiner’s early films, like The Princess Bride (1987) and When Harry Met Sally… (1989), had very minor and very benign jokes at the expense of religion, but his later films turned pretty hostile; Misery (1990), A Few Good Men (1992) and Ghosts of Mississippi (1996) all featured murderous characters who happened to talk about God and the Bible and so on. Ghosts of Mississipi is an especially interesting example because it is based on a true story, and when I interviewed the real-life person on whom the Alec Baldwin character was based (see page 4 of this PDF file), he said he wished the film had had even one scene that acknowledged the positive role that prayer had played in his own life and in the lives of other people who were part of that story.

But now, The Bucket List features Morgan Freeman as a man who believes in God, has faith in a life beyond this one, and quotes something his pastor once told him when it comes time to deliver the film’s inspirational theme — while Jack Nicholson plays the skeptic who openly says that he “envies” people like Freeman. I could say even more about the film’s portrayal of the Freeman character, and how this portrayal relates to the character’s beliefs, but it might mean giving something away; so for now, all I will say is that the film gives Freeman the voice-over, and thus invests his character, rather than Nicholson’s, with the greater moral or spiritual authority.

The film as a whole is nothing to write home about — the premise is implausible, the humour tepid, and the tacky CGI can’t hide the fact that they were too cheap to film the overseas scenes on location — but seen in the context of Reiner’s larger filmography, I can’t help but find this one aspect of the film rather interesting, in much the same way that I found Reiner’s similarly flawed The Story of Us (1999; my comments) rather interesting when it veered in certain existentialist directions.

January 13, 2008 Yet another movie not screened for critics?
Recent Comments
1 Comment | Leave a Comment
"What a strange article. Using movies as your basis to defend that Lazarus was murdered ..."
Mark Ross DeFazio The death, resurrection, and second death ..."
"Another with Ethiopian eunuch and Philip https://archive.org/details..."
Jason McKahan Watch: Philip is the original vanishing ..."
"I found Hanky Panky a pretty cool 80s movie when I first saw it on ..."
UniblabBR Sidney Poitier marathon: Hanky Panky (1982) ..."
"In 1972, yes. The movie was made in 1956 but the ratings system didn't exist ..."
Peter T Chattaway One of the reasons I do ..."
Browse Our Archives
get the latest from
FilmChat
Sign up for our newsletter
POPULAR AT PATHEOS Entertainment
1