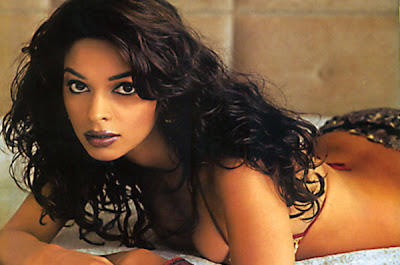 The Aquarian Gospel has a female lead. Reuters reports:

Bollywood actress Mallika Sherawat will play an ascetic who befriends Jesus of Nazareth in a U.S. film that revolves around a legend that he visited India.

Filmmaker Drew Heriot‘s “The Aquarian Gospel” is about Jesus’s life between the ages of 13 and 30, a period not documented in the Gospels when legend has it he traveled through India, Tibet and Persia.

Heriot said Sherawat had been the first choice to play the role of the ascetic in the $15-million film, set for release in 2009. . . .

Sherawat created a stir in her Bollywood debut with 17 kissing scenes in “Khwahish.” She also played the role of an Indian princess in the Jackie Chan film “The Myth.”

The actress said it would be a challenge to bring to life her character as a female yogi in “The Aquarian Gospel.”

“I find that in most mythological and spiritual film stories, women seem to be lacking any true wisdom or a sense of humor,” Sherawat said in a statement released by her publicist.

“I look forward to bringing both of those qualities to this character.”

The Times of India has a little more detail, including the name of Sherawat’s character:

In the movie, he encounters people of all creeds and meets sages from different faiths. Sherawat will play Saraswati, one of Yeshua’s (Jesus) loyal friends whom he bonds with while he travels through India.

The actress, who has broken taboos in the Indian film industry with bold movies such as Khwaish and Murder , feels The Aquarian Gospel also breaks a different kind of taboo by discussing the lost years of Jesus. Saraswati is a celibate yogini , a nice contrast for an actress known as Bollywood’s Bardot.

No word yet on who will be playing Jesus himself.

February 19, 2008 The Master and Margarita -- again!
Recent Comments
1 Comment | Leave a Comment
"I have neither noticed that much. I recenty read a leadership book inspired from Cyrus ..."
Hamid Mortazavi Cyrus the Great — a Persian ..."
""AD" stands for "Anno Domini", a Latin expression meaning "In the Year of Our Lord".So ..."
Peter T Chattaway The Chosen — season one, episode ..."
"Why does it say at the start of episode 3 that it takes place 26 ..."
Desiree Chamberlain The Chosen — season one, episode ..."
"What about Hellboy, The Grudge, Ghoulies, and Anaconda?"
45th Spiderbob Group VGCP When R-rated franchises go PG-13 …
Browse Our Archives
get the latest updates from
FilmChat
and the Patheos
Entertainment
Channel
POPULAR AT PATHEOS Entertainment
1