The Master and Margarita — again! 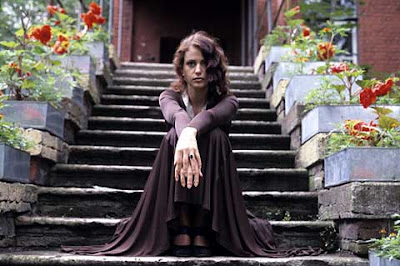 Despite my interest in Jesus-themed movies, I regret to say that I know very little about The Master and Margarita beyond the fact that there have been several films and TV shows based on a novel of that name which straddles the modern and biblical worlds; the IMDb and Wikipedia list at least seven adaptations produced between 1972 and 2005, in countries such as Russia, Hungary, Yugoslavia, Italy, the United Kingdom and Poland.

(One of the Polish versions, incidentally, was directed by Andrzej Wajda, who has directed many highly-regarded films, and whose most recent effort, Katyn, is currently nominated for the Oscar for Best Foreign Language Film. Three of his earlier films were nominated for that award, too. But I digress…)

At any rate, it looks like the Americans are going to have a go at this story, now. The Hollywood Reporter reports:

Satan comes to Earth in Mikhail Bulgakov‘s novel “The Master and Margarita,” and he will return to the big screen in the adaptation from Stone Village Pictures and producer Scott Steindorff.

The Los Angeles-based production company has optioned the late Russian writer’s once-banned book, an inspiration for Rolling Stones’ “Sympathy for the Devil,” in a low- to mid-six figure against a low-seven figure deal.

SVP president Steindorff will produce the film. SVP partners Chris Law, Danny Greenspun, Robin Greenspun and execs Scott Lastati and Dylan Russell will executive produce alongside Michael Lang. It’s one of several SVP adaptations, including “Love in the Time of Cholera” and the upcoming “True Believer.”

“Master and Margarita” begins in pre-WWII Moscow, where the devil appears as a mysterious man who insinuates himself into a literary crowd. Amid a series of deaths and disappearances, the devil brings together the title characters, a despairing novelist and his devoted but married lover. The story shifts to the setting of the master’s rejected novel, Jerusalem in the time of Pontius Pilate, and then to a supernatural world where Satanic forces have taken over Margarita’s life. . . .

Bulgakov finished the book shortly before his death in 1940, but in part because of its allusions to Stalin’s regime, it was banned until a two-part, censored version was published in 1966 and 1967. SVP now is hunting for a writer to adapt it from the uncensored manuscript.

The Reporter also notes that Roman Polanski was set to make his own adaptation of this story back in the late 1980s, until the studio pulled the plug for budgetary reasons. Polanski, of course, is a native Pole with an active interest in the supernatural (Rosemary’s Baby, 1968; The Ninth Gate, 1999), and he has even acted in a couple of Wajda films — so it may be a shame we’ll never get to see what sort of spin he would have given this story, and how his film would have compared to the others, especially the Polish ones. (I say “may be” because, like I say, I have never read the book or seen any of the other film versions.)

Incidentally, the photo above comes from a Russian mini-series that aired in 2005, via the St. Petersburg Times.

February 19, 2008 Interview: Dolph Lundgren (The Final Inquiry, 2006)
Recent Comments
2 Comments | Leave a Comment
"Mark 3:21, 31: "When his family heard about this, they went to take charge of ..."
Peter T Chattaway The Chosen starts shooting its second ..."
"Where do you get the idea that Jesus' mother and brothers were there to intervene ..."
tmirus The Chosen starts shooting its second ..."
"This was a refreshing read. I'm an average fan of Hellboy but I'm also a ..."
Andrew Mathews Doug Jones on Hellboy and Christianity.
"Great interview! One thing I've wondered since watching Season 1 is why they didn't include ..."
A.J. Cattapan Interview: The Chosen writer-director Dallas Jenkins ..."
Browse Our Archives
get the latest from
FilmChat
Sign up for our newsletter
POPULAR AT PATHEOS Entertainment
1