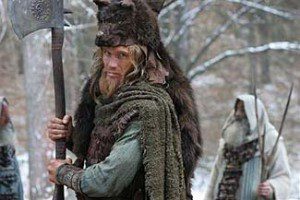 Dolph Lundgren made a name for himself in the 1980s, as the villain in films like A View to a Kill, where he tangled with James Bond, and Rocky IV, where he played Russian boxer Ivan Drago. Then he switched to playing heroes in films like Masters of the Universe and the original version of The Punisher.

His films since then have not been so high profile, but he has stayed busy, acting in a steady stream of movies and even directing a few. His newest film as an actor, The Final Inquiry, is a remake of a 1986 film about a Roman soldier who is sent to Palestine to investigate claims that Jesus came back from the dead. Lundgren plays Brixos, a Nordic slave who serves as the Roman tribune’s bodyguard.

Lundgren spoke with CT Movies by phone, in anticipation of the film’s DVD release today.

How close is this new film to the 1986 original? Is your character in that one, as well?

Lundgren: I don’t believe so. I saw the previous one many years ago. I think the original was with Harvey Keitel and Keith Carradine, right? It was good, but it was very different. Not as much action, not as much adventure. It was a little more philosophical, dialogue based, I think.

Why do you think there is such an emphasis on action and adventure in this new film?

Lundgren: Well, the same producer [Fulvio Lucisano] did both. He’s one of the big producers in Italy. I suppose he wanted to reach out to a bigger audience, and make it more exciting, make it more accessible to more people.

There was a rumor that the film might be re-cut for the United States. Do you know if they’ve toned down the violence or anything like that?

Lundgren: I haven’t seen the re-cut. I’m not directing the picture, so I don’t know all the ins and outs of what was done, but I think there was a concern for it to not get too violent. So I would think maybe that was one of the concerns.

Would you say that this is a “family film”?

Lundgren: I would think so. Because it doesn’t have much profanity — none, I don’t think — and like I said, the violence isn’t brutal. It does give you a history lesson of what happened, around that time in history when this new religion was born. It was a very violent time, of course. People were cut in pieces right and left and fed to wild animals, or killed in as many ways as you can think of. It was interesting to me, the historical aspect of exactly what happened, and the fact that this film is based on these letters that were sent from the tribune to the Emperor in Rome.

What drew you to this film?

Lundgren: A number of factors. I thought it was an interesting story about the fact that the Roman tribune is sent down to investigate the death and so-called resurrection of some criminal or rabble-rouser who was crucified. And the fact that there were some good actors attached, like F. Murray Abraham [who plays the father of Tabitha] and my own countryman, Max von Sydow [who plays the Emperor Tiberius]. So I thought, Yeah, why not? It will be an interesting job.

I get the impression that movies like this are made more often in Europe than in North America. Is that how you perceive it, that it is more common over there to make films with this sort of biblical, religious subject matter?

Lundgren: I think it is more common to make period pieces in Europe, because the film industry is not as commercialized. And because there’s more history around, the people that write the scripts and make the movies are inspired by it. I think that’s why we have a lot of historical movies out of Europe.

So religious movies are more of a subset of the broader historical trend.

Lundgren: I think it is, and also the fact that there is more history in Europe, whereas in America, America is about the future. People in Europe think more of the past, and that’s why I think filmmakers are drawn to it more.

You yourself have become a director as well, recently, right?

Lundgren: Yeah, I’ve done a couple movies. I just did one that also has a slightly faith-based storyline called Missionary Man. It’s kind of a modern western, but the main character — a stranger on a motorcycle who turns out to be a violent fellow, at least to the people who deserve it — carries a Bible and reads from it and talks to kids about it. Westerns have this mythical, biblical motif usually, and this one does too.

Is it just that one film that has the biblical, religious elements?

Lundgren: Of the ones I’ve directed, yes. But I think we are affected so much by mythical stories and biblical stories, our society being based on the Bible — at least the old society is based on biblical terms and laws — that there’s more of it in art than people realize. Sometimes it comes to the surface, but sometimes it’s below the surface, but certainly, it does influence some of my movies.

Now that you’ve directed a film and been “in charge,” how is it being just an actor on a film like this one?

Lundgren: Well, it’s more comfortable. (laughs) In one way, you don’t have to worry so much about stuff, and you have more down time, but it’s also really frustrating, sometimes, because you kind of want to pipe up and say something. You realize it’s not your job, really, and you can suggest something to the director. But on the whole, it’s a good thing to switch it up and do a little directing and do a little acting and do a little of both.

Lundgren: I grew up in Sweden, in a Lutheran family. It’s the state church, everybody is born into it. When I was a kid, there was much more religion in people’s lives — you went to Sunday school and you had religion in school, which is now gone. But what I do feel a part of my life is a lot of the traditions in religion. I try to introduce our two daughters (ages 6 and 11) to it, and I try to keep them informed about it, so they have an option to make it part of their lives when they grow up. Because in the normal life of an actor or director, running around, there’s not much time to go to church. But there’s other ways to be spiritual, too.

Any last thoughts on the film?

Lundgren: I really wish the picture and everybody the best. It was a good experience and I hope people enjoy the picture.