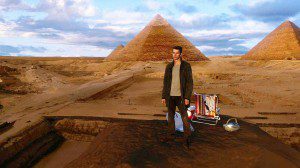 When you think about it, teleportation is a natural subject for the movies. You could even say that filmmakers do it all the time, already: in a typical film, when, say, a character walks out the door, it is often the case that the shot inside the house, of the person walking to his or her exit, was filmed on a soundstage, while the shot outside the house, of that same person stepping onto the sidewalk, might very well have been filmed in another city, or even another country. But these images are generally edited together so seamlessly that you don’t have time to notice.

Jumper, which concerns a couple of young men who can leap instantly to any place in the world, wears its seams proudly — yet it keeps the action moving pretty fluidly across those seams. The two men in question don’t necessarily get along, but for various reasons, they follow each other and chase each other, and in the space of a few minutes they might find themselves running through Asian streets and African dunes and the observation decks of American skyscrapers. It’s all very brisk and unpredictable — but despite all the motion, the story itself never really goes anywhere.

The film takes its title and most of its prologue, but little else, from the novel of the same name by Steven Gould. The story begins with David Rice (Max Thieriot), a teenaged boy, accidentally discovering that he has the power to “jump” to other places when he finds himself in a life-threatening situation; one minute he is trapped under the ice in a frozen river, the next he is on the floor at his local public library. David’s first few jumps are pure reflex actions, but he soon figures out how to control this talent; and after he runs away from home — his divorced father William (Michael Rooker) is an abusive alcoholic — he supports himself by jumping into bank vaults and “jumping” back to his apartment with bags full of money.

A few years later, David (now played by Hayden Christensen) is living the good life. He has a swanky pad and he tours the world every day, without paying any travel fees. But one day he comes home and finds a man named Roland (Samuel L. Jackson) waiting for him — and thus he finds himself dragged into a so-called “war” between Jumpers like him and another group, called the Paladins, who have apparently been trying to wipe out the Jumpers for hundreds of years.

At least, we are told it’s a “war.” That’s what one character calls it. But there seem to be precious few combatants on either side. David does meet Griffin (Billy Elliot‘s Jamie Bell), a British Jumper who has taken it upon himself to kill the Paladins that come his way. And there is a third Jumper, in China, who never meets either David or Griffin; in fact, we don’t even see him until moments before he is caught and killed by Roland and his fellow Paladins. But that’s about it, and there is nothing to suggest that any Jumpers have ever banded together in self defense. Indeed, even Griffin is quite reluctant to help out when David suggests that they team up.

Meanwhile, Roland doesn’t seem to have more than a few people helping him, and the brief hints we get of the larger Paladin organization are woefully underwritten. It is also puzzling that Roland, who chastises his underlings for not pursuing David in sufficient numbers, should choose to confront David all by himself, the first time they meet. But then, if he had brought his team along, David might not have escaped him, and then there wouldn’t be much of a story to tell, would there? (That said, it is kind of fun to see Jackson and Christensen go after each other again, so soon after their fateful lightsaber duel in Star Wars: Episode III: Revenge of the Sith. Jackson even uses a device to stun Christensen that looks rather like a lightsaber hilt.)

The script, credited to three different writers, suffers from other weaknesses too. For one thing, it doesn’t always seem to follow the rules that it sets out. Jumpers can only jump to places that they can remember visiting or seeing with their own eyes, unless they follow another Jumper through the “jump scar” that lingers in the air after they leave — and it is not clear that, say, Griffin is following either of these principles when he follows David around in the early scenes. (Griffin does not know the places David knows, and he never seems to follow right behind David.)

And then there is the obligatory love interest. When we first meet the adult David, it seems he makes a point of seducing women in far-flung locales just because he can. But the moment Roland begins pursuing him, David returns to his hometown and looks up Millie (Rachel Bilson), the girl he had a crush on in high school. And even though she hasn’t seen him in years, Millie immediately goes with him on a plane trip to Rome. (They go by plane because he hasn’t revealed his superpower to her, not yet.) And there she sleeps with him. And then the Paladins attack. Whoops.

It is difficult to tell whether the film is crippled more by the underwritten characters or by the underwhelming performances. Christensen and Bilson are not exactly the most interesting actors around, but in fairness, the characters they play are fairly shallow to begin with. And Jackson, whose character has attention-getting, blindingly white hair even though you might think his job would require him to blend in a little more, is in pure paycheque-collecting mode here; at times he even seems a little bored.

The Paladins, incidentally, are identified by Griffin as a bunch of “fanatics” who were responsible for witch hunts and the Inquisition in medieval Europe — and on two separate occasions, Roland gives a religious justification for his work, saying at one point that Jumpers are an “abomination” and he is hunting them down because only God should have the power “to be at all places at all times.” In this regard, the film’s sensibilities are the opposite of, say, X2: X-Men United, where it was the teleporting superhero, Nightcrawler, rather than the persecuting bigots who had some sort of faith.

It is interesting, though, that Griffin would say the Paladins were behind some of the institutional abuses of the past, given that Roland typically poses as an agent for the NSA, CIA, FBI, or some other acronym whenever he needs the top-secret info that will help him find David. On one level, the film taps into fears that government agencies will misuse their power — a theme that Jumper director Doug Liman has already explored in The Bourne Identity, which he directed, and its sequels, which he executive-produced — but on another level, it distances the villains from today’s agencies by showing how Roland only pretends to be one of their officers.

It’s a striking difference from the original novel, which was basically a coming-of-age story in which David initially resents the government the same way he resents his father, but eventually comes to see past the need for revenge on both counts — not least because he is afraid that he might become the very thing he hates. But any hint of psychological complexity or subtlety is tossed aside in the film, which tries to set up a more generic kind of battle between good and evil — and in doing so, it ends up promising more than it can deliver. For all its epic locations, Jumper remains pretty small-scale. Maybe they’re saving the real “war” for the sequel?

1. Can you think of any biblical examples of teleportation? What about passages like Acts 8:38-40? Is it a power you would like to have? What would you do with it?

2. What do you make of Roland’s statement that only God should have the power to be in all places at all times? Is that an accurate description of what David and Griffin can do? What if God gave them this power? Consider examples in the Bible and elsewhere, where God has given people the power to heal, and so on. Why does God share his power? Why do people sometimes try to control how others use it?

3. David says he always intended to pay back the banks that he robs. Why do you think he doesn’t? How do our limitations, or the lack thereof, affect our morality?

Jumper is rated PG-13 for sequences of intense action violence (people being zapped with stun guns, attacked with flamethrowers, hit by teleporting vehicles, stabbed bloodlessly with knives, etc.), some language (a few four-letter words, Jesus’ name spoken in vain a few times) and brief sexuality (at least two images of women in bed, either in their underwear or tucked under the covers). 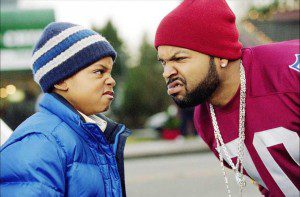 Entertainment
Review: Are We There Yet? (dir. Brian Levant,...
FilmChat
TRENDING AT PATHEOS Entertainment