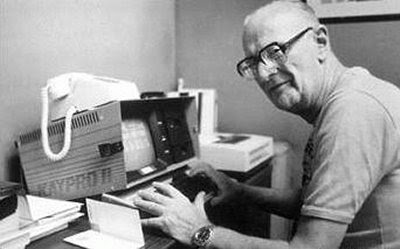 Joe Leydon says this is one of his favorite pictures of Arthur C. Clarke, who died today at the age of 90. I agree. Partly because I grew up with an Osborne 1 computer, and I saw several Kaypro machines at the F.O.G. meetings that I used to attend with my dad in the 1980s. And partly because it was during this period that I saw 2010: The Year We Make Contact (1984; my comments) and, through it, discovered both the original novel by Clarke and the novel that preceded it. I didn’t get around to seeing 2001: A Space Odyssey (1968) itself until a few years later, when it happened to be showing at the UBC theatre, and I didn’t really “get” the film until I saw it again many years after that. But it’s a treasure, and thought-provoking. Sadly, I have only read a few of Clarke’s other books. I own an exhaustive anthology of his short stories but haven’t gotten very far into it. And Kevin Miller reminds me that I still haven’t read my copy (or is it my wife’s?) of The Lost Worlds of 2001, which chronicles the making of Stanley Kubrick’s film, as Clarke saw it. And then there are the books I have only dreamed of picking up, like From Narnia to a Space Odyssey, which collects the letters exchanged by Clarke and — believe it or not — C.S. Lewis. Too much reading to do. Too little time. Sigh.

March 20, 2008 Two more movies not screened for critics.
Recent Comments
2 Comments | Leave a Comment
""AD" stands for "Anno Domini", a Latin expression meaning "In the Year of Our Lord".So ..."
Peter T Chattaway The Chosen — season one, episode ..."
"Why does it say at the start of episode 3 that it takes place 26 ..."
Desiree Chamberlain The Chosen — season one, episode ..."
"What about Hellboy, The Grudge, Ghoulies, and Anaconda?"
45th Spiderbob Group VGCP When R-rated franchises go PG-13 …
"Not yet, but I might do something like that once Season 2 is complete."
Peter T Chattaway The Chosen — season one scripture ..."
Browse Our Archives
get the latest updates from
FilmChat
and the Patheos
Entertainment
Channel
POPULAR AT PATHEOS Entertainment
1