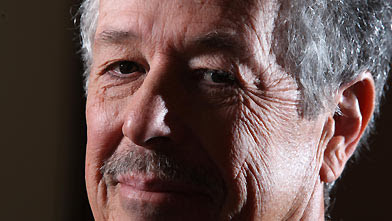 Denys Arcand is nothing if not obsessed with history. So when I heard that he conceived his newest film as part of a “trilogy” with The Decline of the American Empire (1986) and The Barbarian Invasions (2003), I just knew that the title of the new film — Days of Darkness — could not be correct. Surely, given that the original French title is L’Âge des ténèbres, a phrase like The Dark Ages would have been more accurate — and would better follow the historical trajectory suggested by the titles of its predecessors.

Ah, the graveyard. As personally upbeat as Arcand seems to be, he sees signs and portents of doom everywhere: global warming, epidemics, illiteracy and superstition.

“Personally, I think we are going towards another Dark Age. After the first Dark and Middle Ages and the fall of the Roman Empire, society crumbled for a period and there was a rise in faith and religious wars. I see this coming again in modern times.”

In fact, the movie was originally going to be called The Dark Ages but Arcand said that American distributors objected, perhaps because the title was either too literate or too negative. Logically, The Dark Ages would be the sensible follow-up to his last film, the Oscar-winning The Barbarian Invasions (2003). Along with the Oscar-nominated The Decline of the American Empire (1986), the three films form a loose trilogy.

If those previous films were dramas marked by mordant wit, Days of Darkness – which opens on Friday in Toronto and Vancouver – represents a shift to the broadly satiric. Arcand described it as “both funnier and more sombre. It’s a film of extremes.”

Oh well, titular issues aside, I can’t wait to see this film. Especially since I hear that, like The Barbarian Invasions before it, it also features a cameo by at least one of the characters from Arcand’s other Oscar-nominated film, Jesus of Montreal (1989).

March 18, 2008
Thoughts on my daughter's second movie.
Next Post

March 19, 2008 From a young Chekov to a young Kyle Reese
Recent Comments
1 Comment | Leave a Comment
"I have neither noticed that much. I recenty read a leadership book inspired from Cyrus ..."
Hamid Mortazavi Cyrus the Great — a Persian ..."
""AD" stands for "Anno Domini", a Latin expression meaning "In the Year of Our Lord".So ..."
Peter T Chattaway The Chosen — season one, episode ..."
"Why does it say at the start of episode 3 that it takes place 26 ..."
Desiree Chamberlain The Chosen — season one, episode ..."
"What about Hellboy, The Grudge, Ghoulies, and Anaconda?"
45th Spiderbob Group VGCP When R-rated franchises go PG-13 …
Browse Our Archives
get the latest updates from
FilmChat
and the Patheos
Entertainment
Channel
POPULAR AT PATHEOS Entertainment
1