Thoughts on my daughter’s second movie. 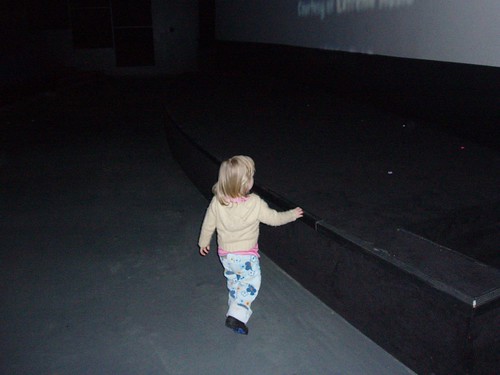 I have talked before about how my daughter goes right up to the TV screen when a DVD comes to an end. Here she is going right up to the movie screen as the credits roll at the end of Dr. Seuss’ Horton Hears a Who!, which I saw with her yesterday. It was Elizabeth’s second movie, following The Pirates Who Don’t Do Anything, and this time, she stayed awake for the whole thing. (Her brother hadn’t been feeling very well lately, so we left him at home; he was asleep as we were getting ready to go.)

For what it’s worth, I was pleasantly surprised by how much I liked this film; I could have done without some of the pop-culture references, which felt like padding and a bit out-of-place, but the film was consistently funny and the animation did a much, much better job of expanding on Dr. Seuss’s visual imagination than those awfully chintzy latex costumes that Jim Carrey and Mike Myers had to wear in the live-action adaptations of How the Grinch Stole Christmas (2000) and The Cat in the Hat (2003).

I also found myself thinking that this film would make a fine addition to my family’s home-video library and might dovetail nicely with the moral and spiritual upbringing of our kids.

For one thing, I appreciate how the film encourages us to look both “up” and “down” — to humble ourselves and see ourselves as small, yet also to see the greatness that exists in others who we may find all too easy to dismiss. Appropriately, the former point is emphasized with a “God shot” that looks straight down on Horton himself from a heavenly height. And as to the latter point, pro-lifers may be fond of quoting the line “A person’s a person, no matter how small” as a sort of anti-abortion creed, but to me, within the context of this film at least, that theme resonated more closely with what Jesus had to say about “the least of these“. I really appreciated how the entire community of Whoville has to band together in the end, and how the presence or absence of even a single person can make a difference in that respect.

Then there is the scene where Horton says, “I meant what I said and I said what I meant, and an elephant’s faithful 100 percent,” and his friend replies — I paraphrase — “Can’t you be just 99 percent faithful? I mean, I never make it to 99, and I think I’m pretty good.” Wow. Who can’t identify with that particular form of self-justification? How often have we consciously broken promises or turned our backs on people who needed us because, well, we believed that we are mostly good people, so a few bad deeds weren’t all that big a deal? Obviously, none of us is perfect. But the conscious complacency — the wilful settling for imperfection — is still a problem. And remember, in this case, the lives of an entire community of little people hang in the balance.

I am vaguely reminded of that scene in Star Trek: Insurrection (1998) where Captain Picard chews out an admiral who has tried to justify moving several hundred people to an entirely different planet, with long-term fatal consequences, because, well, they’re only several hundred people. To this, Picard replies, “How many people does it take before it becomes wrong? Hmm? A thousand? Fifty thousand? A million? How many people does it take, Admiral?” Horton’s absolute commitment to his principles, and his refusal to haggle over numbers, reflect a similar nobility.

I am also vaguely reminded of a line that the priest or deacon sings a few times every Sunday morning (and on other occasions, too) during the liturgy in the Orthodox church: “That the whole day may be perfect, holy, peaceful, and sinless, let us ask of the Lord.” I don’t know that any of us actually expect the rest of our Sundays, etc., to be “perfect” and “sinless”. But it is still something to strive for, something to ask for, something to aim for. And I appreciate the way that Horton holds to this ideal, as well.

And then there is all that stuff about how things really can exist even if you cannot see, hear, or feel them. Gotta love it.

Oh, one last note: I got a chuckle out of the way Elizabeth curled up in her chair, away from the screen, when the dinosaur roared at the end of the trailer for Ice Age: Dawn of the Dinosaurs. I think this is the first time I have ever seen her scared or startled by anything onscreen like that — though she might have been reacting to the sound system as much as anything else. At any rate, I’ll have to file that one away for future reference.

March 19, 2008 I knew it!
Recent Comments
2 Comments | Leave a Comment
"I certainly hope to! Just haven't had the time to do Season 2 yet."
Peter T Chattaway The Chosen — season one scripture ..."
"Hi Peter.Thanks for this extensive list. Will you be doing the same for all seasons? ..."
Meelperd The Chosen — season one scripture ..."
"I have neither noticed that much. I recenty read a leadership book inspired from Cyrus ..."
Hamid Mortazavi Cyrus the Great — a Persian ..."
""AD" stands for "Anno Domini", a Latin expression meaning "In the Year of Our Lord".So ..."
Peter T Chattaway The Chosen — season one, episode ..."
Browse Our Archives
get the latest updates from
FilmChat
and the Patheos
Entertainment
Channel
POPULAR AT PATHEOS Entertainment
1

Entertainment
Hosea at the movies: three films and a...
FilmChat
TRENDING AT PATHEOS Entertainment