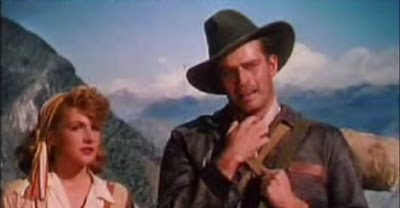 Was the late Charlton Heston one of the inspirations for Indiana Jones? Dave Kehr, via Cinematical, says yes, indeed, he was:

One of Heston’s most influential roles remains one of his least known: that of Harry Steele, a dashing though cynical adventurer, who wears a fedora and a leather jacket, as he searches for Incan treasure in a manner that distinctly suggets a certain later day hero created by Steven Spielberg and George Lucas. The film is Jerry Hopper’s 1954’s “Secret of the Incas,” and Paramount has been strangely reluctant to release it to television or DVD. Reportedly, Spielberg and Lucas screened it for members of the production team during the planning of “Raiders of the Lost Ark,” which is very easy to believe given the many narrative and visual parallels.

TheRaider.net also counts this film among Lucas and Spielberg’s influences, and it turns out a few clips are up at YouTube:

Just for the record, Secret of the Incas came out at the exact mid-point between Heston’s two films for Cecil B. DeMille — two years after The Greatest Show on Earth (1952) and two years before The Ten Commandments (1956). All of Heston’s other, more famous movies lay even further in the future.

Lucas and Spielberg were certainly inspired by some of Heston’s other films, too. Spielberg explicitly references The Ten Commandments in Close Encounters of the Third Kind (1977), and it was he who pitched The Prince of Egypt (1998) as an animated version of DeMille’s Moses movie. As for Lucas, the pod race in Star Wars: Episode I – The Phantom Menace (1999; my review) is straight out of Ben-Hur (1959). Are there any other examples?

April 10, 2008 Yet another movie not screened for critics.
Recent Comments
3 Comments | Leave a Comment
Browse Our Archives
get the latest updates from
FilmChat
and the Patheos
Entertainment
Channel
POPULAR AT PATHEOS Entertainment
1