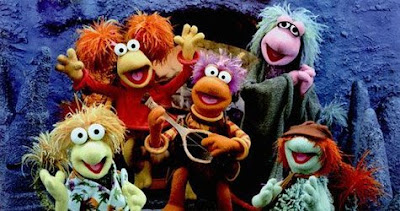 Two years ago, I interviewed Cory Edwards, the writer-director of Hoodwinked! (2005; my review), and in that interview, he talked about how he tried to overcome the budget limitations on his animated film by employing the same “fakey” but “charming” aesthetic that Jim Henson had used for Kermit the Frog. So I wasn’t that surprised to read in Variety tonight that Edwards is bringing another of Henson’s old creations to the big screen:

The Weinstein Co. will turn the Jim Henson series “Fraggle Rock” into a live-action musical feature.

Cory Edwards, who directed the animated “Hoodwinked!” for TWC, will helm the picture and write the screenplay. The Jim Henson Co. will produce and TWC will distribute. . . .

The deal furthers the relationship between TWC and the “Hoodwinked!” creative team. Edwards is reteaming with “Hoodwinked!” co-writer Tony Leech on the animated alien adventure “Escape From Planet Earth,” on which Leech is making his directing debut.

Edwards is separately developing a live-action feature adaptation of Cedar Fair’s Halloween Haunt franchise, designed to be shot in 3-D by Kerner Optical and produced by Davis Entertainment, Dave Phillips and Tracey Edmonds. That pic is looking for a backer. . . .

This news comes only two months after it was announced that Jason Segel, the writer-star of Forgetting Sarah Marshall, will be developing a big-screen revival of the Muppets themselves. Edwards and Segel couldn’t be more different in terms of their approach to comedy — at least where family-friendliness is concerned — but their work does suggest a strong, shared affinity for the works of Henson etc. It could be interesting to see them share a panel discussing the subject, or something like that.

May 12, 2008
The trivialization of a Hitler movie.
Next Post

May 13, 2008 Indy IV -- John Hurt's identity revealed?
Recent Comments
0 | Leave a Comment
"I have neither noticed that much. I recenty read a leadership book inspired from Cyrus ..."
Hamid Mortazavi Cyrus the Great — a Persian ..."
""AD" stands for "Anno Domini", a Latin expression meaning "In the Year of Our Lord".So ..."
Peter T Chattaway The Chosen — season one, episode ..."
"Why does it say at the start of episode 3 that it takes place 26 ..."
Desiree Chamberlain The Chosen — season one, episode ..."
"What about Hellboy, The Grudge, Ghoulies, and Anaconda?"
45th Spiderbob Group VGCP When R-rated franchises go PG-13 …
Browse Our Archives
get the latest updates from
FilmChat
and the Patheos
Entertainment
Channel
POPULAR AT PATHEOS Entertainment
1